A pillar of the global automotive industry, Ford Motor Co. also emphasizes the importance of making an impact locally. Few programs reflect the company’s philanthropic approach to good corporate citizenry better than Ford’s “Thirty under 30” program. Introduced in 2016, Thirty Under 30 is an innovative fellowship underwritten by the Ford Fund, that encourages employees age 30 and under to combat challenging social issues in metropolitan Detroit. The competitive application process drew more than 300 applicants from throughout the United States this year, all seeking to partake in the year-long program.

This year, the Thirty Under 30 class includes four Wayne State University alumni, young professionals who will join others in an effort to creatively combat issues related to homelessness — all while tapping into the emerging leaders’ volunteerism and leadership skills.

Along with employees from various Ford departments — including legal, communications, IT and finance — the four will leverage their professional and personal experiences in collaboration with local nonprofit organizations to develop strategies to attract volunteers and donors, and to provide life-changing solutions for those seeking shelter. Employees will take time away from their jobs at Ford to brainstorm these efforts. Each has been assigned to consider a particular facet of homelessness and housing insecurity, and to work with distinct communities particularly affected by these problems.

Here’s a look at the four Warriors who made the cut for this year’s Ford Motor Co. Thirty Under 30: 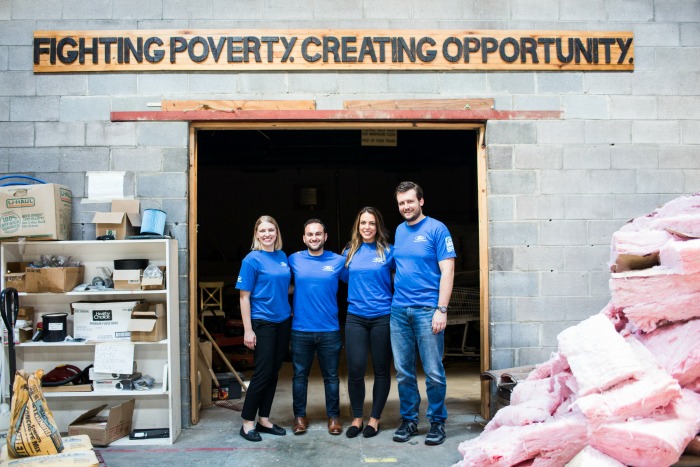 Zurek, 28, graduated Wayne State in 2013 with a bachelor’s in computer science and has worked as an information technology architect at Ford for four years. Among his major accomplishments at the company are his role in to creating the artificial intelligence programming for Ford’s smartphone apps.

In addition to his IT position, Zurek is a WSU student working toward his master’s in computer science. Wayne State is also where Zurek acquired an interest in community work.

Zurek got his start tackling real-world problems while working on a senior project as an undergrad at Wayne State, when he co-founded the nonprofit group Team fEMR to build the open source software to create electronic medical records for economically impoverished countries.

Zurek’s experience at Wayne State inspired him to do more to address local social issues. Ford has given him that chance.

“I was looking to make a difference in my local community and give back to the nonprofits Ford has already began investing in,” said Zurek.

The Thirty Under 30 fellowship has paired Zurek with the Ruth Ellis Center, whose mission is to provide residential safe spaces for runway and at risk gay, lesbian, transgender, bi-attractional and questioning youth. Since his time working with the Ruth Ellis Center, Zurek said the main barriers for LGBTQ youth are safety and access to health care physicians who understand their needs. Currently, Zurek and his Thirty under 30 team are coordinating a solution that will enhance the lives of these youth.

Lumaj, 26, joined Ford in 2016, and currently works as executive communications coordinator. Lumaj graduated Wayne State with a bachelor’s in nutrition and food science in 2014 and with a second bachelor’s in public relations, advertising and applied communication in 2016.

Lumaj first worked with homeless shelters while an undergrad at Wayne State, starting with Grace Centers of Hope in Pontiac. Starting as a receptionist, she used a talent for public relations to stimulate her professional growth during her time working for the shelter, coordinating a “Homeless Awareness Month” campaign and writing newsletters.

Later, she was also placed with the Judson Center-Royal Oak as a part of its Young Leaders Board. The Judson Center is a nonprofit organization that provides comprehensive services to children and families that are impacted by abuse and neglect, autism, developmental disabilities and mental health challenges so that they can become successful in their communities. There, Lumaj used social media and other marketing tools to raise awareness of the life-skills services that the Judson Center provides.

After being recruited by Ford, Lumaj felt compelled to apply for the Thirty Under 30 fellowship. Lumaj said that the opportunity has given her the chance to work for Ford and with a nonprofit organization that has a mission that is very important to her.

As part of her fellowship, Lumaj has been partnered with Cass Community Social Services, which are best known for their Tiny Homes project. Lumaj said that despite being a part of this fellowship and holding weekly meetings with her team to drive toward a solution, she and the other fellows are not trying to fix anything at Cass Community. Lumaj and her team hope to bring a unique perspective into the potential and current pool of solutions.

At the clinic, Duffy provided legal aid for a variety of matters, working with the elderly and with Lakeshore Legal Aid, where she represented many seeking legal action for domestic violence. Duffy said that helping her community have access to justice prompted her application to the Thirty Under 30 program.

“I joined Thirty Under 30 to broaden my horizons to help the community using a different skill — design thinking,” said Duffy. “I am very grateful to Wayne State and the Ford Fund for the opportunities.”

Duffy partnered with Habitat for Humanity Macomb as part of her fellowship. Duffy said her group is still in the design and consulting phase, but working to develop a multi-tiered solution. Duffy and her team are working toward an option that does not solve one issue but can tend to a multitude of the problems stemming from homelessness. Duffy said that while the problem-solving has been very enjoyable, what she has found most rewarding is the relationships that she’s built with her co-workers and the employees and volunteers at Habitat for Humanity. Together, the group is working toward greater image, time and finances for Habitat for Humanity.

Westin Pulizzi, 24, works for Ford as global lead buyer, where he spends long days negotiating contracts and conducting meetings with people across the globe for products that may not be launched for three to four years.

Locally, he’s hoping for a more immediate impact. The 2016 WSU graduate has been partnered with Habitat for Humanity Macomb in hopes of developing better ways to serve those in need. Pulizzi, who earned his bachelor’s in global supply chain management two years ago and is working toward an M.B.A., credited his volunteer work at Wayne State with sparking his passion for social service.

During his time at Wayne State, where he served as the president of the Global Supply Chain Management Organization, Pulizzi also volunteered with the American Red Cross and took part in the Living Warriors learning community. The Living Warriors partners freshman students with seniors as a medium for peer mentorship. Through the learning community, senior roommates help the freshman transition into college life and help cultivate a fulfilling college experience.

“Wayne State gave me opportunities to achieve more than I thought possible when I first started,” said Pulizzi. “If I was at a different institution, I don’t know if I could have achieved all that I have.”

Using the design thinking method he learned at Wayne State, Pulizzi said that he has realized that he may not immediately arrive at a solution for issues that arise. Being a strategic planner, Pulizzi appreciates the process of looking at solutions in a new light, and cultivating new ideas by reframing the questions asked. He also appreciates that doing his part means empowering those he hopes to serve.

“Habitat for Humanity has this saying,” said Pulizzi. “‘It’s not a hand-out. It’s a hand up.’”