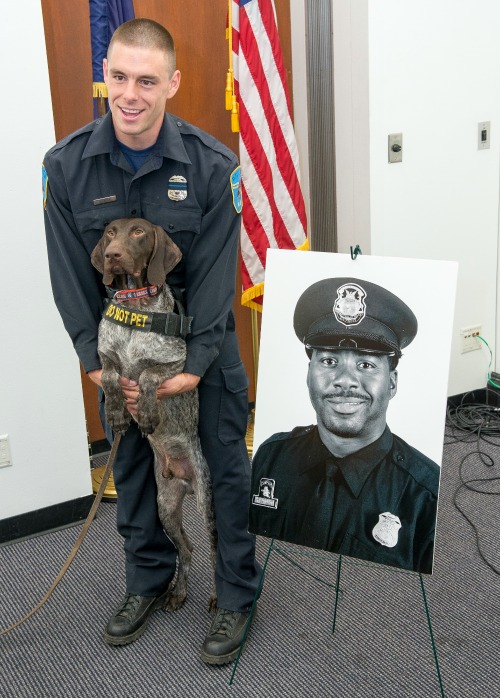 Dozens of police officers from the Wayne State University and Detroit police departments attended a special ceremony yesterday at the McGregor Memorial Conference Center to honor a fallen officer.

While attempting to stop a homicide suspect they had identified, units from the CVRP surrounded the fleeing vehicle. The suspect opened fire on Officer Hill. Officers returned fire, killing the subject, but Officer Hill was wounded and transported to the hospital in critical condition. He succumbed to his wounds on Oct. 19, 2013.

“It is our honor to name our new canine in memory of Officer Hill,” Holt said. “By naming Wolverine in honor of Officer Hill, we hope to continue the high level of dedication and service that he demonstrated to the city of Detroit every day.”

WSUPD Officer Collin Rose (pictured), who also spoke at the ceremony, recently completed an extensive training regimen with Wolverine and is serving as the canine’s handler and partner.

Called a Vapor Wake canine — the trademarked name of bomb-sniffing dogs trained by the company AMK9 — Wolverine is specifically trained to detect body-worn explosives and other illicit substances on a moving target. Traditional explosive-detecting canines are trained to view static objects or people, while Vapor Wake dogs detect the odor itself as the subject moves.

Following the program, more than 70 police officers, family members and friends moved outside onto Gilmour Mall and released balloons in honor of Officer Hill.