Basim Dubaybo, M.D., has been appointed vice dean of Faculty Affairs and Professional Development for the Wayne State University School of Medicine.

He will take over the office Aug. 15. 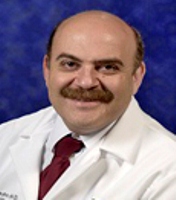 A former interim chair of the WSU Department of Internal Medicine, Dr. Dubaybo will replace Virginia Delaney-Black, M.D., M.P.H., who is stepping down from the position but will remain on the faculty.

Dr. Dubaybo has been a member of the faculty since 1987. He has served in the Department of Internal Medicine, and its Division of Pulmonary, Critical Care and Sleep Medicine. He also served from 2005 to 2010 as assistant dean for Veterans Affairs for the School of Medicine, as well as chief of the Medical Intensive Care Unit and director of Respiratory Therapy for the Veterans Affairs Medical Center in Allen Park.

He was chief of staff for the John D. Dingell Veterans Affairs Medical Center from 2005 to 2010. Since December 2016, while serving as director of Medical Education and Designated Institutional Official at Ascension Providence Hospital, Dr. Dubaybo continued to participate in the educational mission of the School of Medicine by serving as a member of the Admissions Committee and supervising the outpatient clinical experience of several Pulmonary and Critical Care fellows.

He received his bachelor’s degree in biology-chemistry in 1977 from the American University of Beirut, in Lebanon, and his medical degree from the same institution in 1981.

His post-graduate training includes an internship and a residency in Internal Medicine at the American University of Beirut, followed by a fellowship with the Duke University Medical Center’s Division of Allergy, Critical Care and Respiratory Diseases. He also completed Health Care Leadership Institute training through the Department of Veterans Affairs.

Dr. Dubaybo served as a member of the Promotion and Tenure Advisory Committee for the Department of Internal Medicine, the Southeast Michigan Continuous Medical Education Faculty Development Committee and the School of Medicine’s Admissions Committee and Student Promotion Committee.