DETROIT – Jennifer M. Gómez, Ph.D., has been named a fellow to Stanford University’s Center for Advanced Study in the Behavioral Sciences (CASBS). Gómez is an assistant professor jointly appointed to Wayne State University’s department of psychology and the Merrill Palmer Skillman Institute (MPSI). CASBS brings together top scholars from diverse disciplines and communities to advance understanding of the full range of human beliefs, behaviors, interactions and institutions. Gómez joins 37 scholars from 19 U.S. institutions and nine international institutions and programs in the 2021-22 class. Since the fellowship program started in 1954, 29 CASBS fellows have gone on to win Nobel prizes. 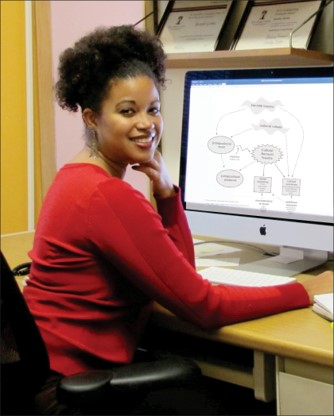 from WSU, and the first in 51 years. She will move to California in August to be in residence at Stanford. The fellowship provides weekly seminars, working groups, symposia, daily lunches, special events, a housing subsidy and a stipend. “The mission of CASBS is literally to change the world,” Gómez said. “To have social science be the impetus to change society for the better.” Her scholarship addresses two major challenges prioritized by Stanford’s CASBS: building equitable societies and rethinking the social sciences. “How do we methodologically do this? I want to develop a framework that fits this problem and is testable.”

Gómez is a nationally and internationally known expert on the impact of violence on Black and other marginalized youth and young adults through her research with Cultural Betrayal Trauma Theory. Candidates propose a research project to complete during their Stanford residency.  Gómez will synthesize her research by writing an academic book with the working title, Cultural Betrayal, Sexual Abuse, & Healing for Black Women & Girls: From Black Lives Matter to MeToo.  It’s a project, she said, “I’ve had on my mind for years,” and she has signed with American Psychological Association (APA) Books for publication. Gómez recently won the APA Carolyn Payton Early Career Award for her article, “Black Women and Girls & #MeToo: Rape, Cultural Betrayal, & Healing,” which serves as the book’s theoretical foundation.

Gómez knows her research and writing will benefit from the diversity of her colleagues. Past fellows cite the camaraderie, free time, cross-discipline interactions and focus on big ideas as highlights of the fellowship. “Stanford is so prestigious. We’ll have people not just from across disciplines, but across seniorities, age, rank, background and countries,” she said.  Her four years at MPSI, an interdisciplinary institute, exposed her to developmental frameworks like parenting that expanded how she thought about sexual abuse and cultural betrayal. “MPSI set me up nicely to take advantage of what the fellowship has to offer. It’s what made me want to apply.”

Gómez also credits MPSI with increasing her confidence as a scholar. Before MPSI, she experienced years of racism and sexism in academia. Although she had a consistent academic network of support, her research with Cultural Betrayal Trauma Theory was routinely rejected by the field’s journals and grants programs. The theory proposes, for example, that if a Black girl is sexually assaulted by a Black man, the outcomes of this trauma — such as PTSD — are impacted by both the victim’s and perpetrator’s experience of oppression in society.

“Then MPSI hired me because of my work with Cultural Betrayal Trauma Theory,” Gómez said. “The faculty immediately saw the value in it and gave me a home where it could continue.” Today Gómez’ work receives national and international recognition. She has co-edited two special issues of the Journal of Trauma & Dissociation, published 17 peer-reviewed articles in her four years at WSU, given invited talks at Stanford and the annual conference for the International Society for the Study of Trauma & Dissociation (ISSTD), shared her research with the general public via The Conversation, and had interviews in Forbes, NBC News, Newsweek, and the Detroit Free Press, among others. Being named a CASBS fellow, she said, “is validating and adds yet another level of respect and freedom for me to continue this work.”