Widely considered one of the best jazz exhibitions in the world, the Detroit Jazz Festival is preparing to enter its 39th year — and once again the influence, talent and presence of Wayne State University will be on full display. Not only will Warriors be represented onstage at the world’s largest free premier jazz showcase, but Chris Collins, director of Jazz Studies at Wayne State and president of the Detroit Jazz Festival Foundation, will serve his eighth year as artistic director for the annual event, which runs from Aug. 31 to Sept. 3.

An internationally celebrated saxophonist himself, Collins has performed with many jazz greats and released numerous commercial and film soundtracks. He also has presented at numerous conferences, workshops and residencies around the world — including Italy, Japan, South Africa and Scotland — on topics ranging from jazz saxophone improvisation to jazz education.

EngageD caught up with Collins just as he came off a recent European tour, sitting down with him to talk about the Detroit Jazz Festival, its impact on the city (and vice versa) and the role that Wayne State has played — and continues to play — in furthering the legacy of what some call “America’s only true art form.”

EngageD: The Detroit Jazz Festival is an iconic annual event, and has been for 39 years now. What should attendees expect this Labor Day weekend?

Collins: We have what’s called the “Untitled Artist,” sponsored by Quicken Loans at the Jazz Festival.  This year it’s Karriem Riggins, a great jazz drummer from Detroit who played for Hancock and everybody. He’s now in L.A., and a Grammy award-winning producer — and I’m talking for the major hip hop acts, electronica and techno stuff. The end result, though, is this quintet of jazz musicians who are working with Karriem who will bring in assets from the hip hop and techno worlds, and they’re going to be restructuring their original music to be this fusion of styles, but from a very sophisticated point of view.

What’s really wonderful about that is that band has been doing such great work, I brought them up with me to the Mackinac Policy Conference this year. When they performed up there, they got a lot of nice cred.

EngageD: Wayne State also has a stage at the festival. Is the Wayne State Stage kind of a staple of the Jazz Festival?

Collins: It’s starting to become that. The last couple of years, Wayne State has actually sponsored the Pyramid Stage. There’s only four main stages at the festival, so it’s a unique thing. I’m a proponent of this because, again, the competition is fierce for that kind of recognition, and it should be Wayne State. This is Detroit so, all things being equal, it should be Wayne State University on that stage. Additionally, we have Wayne State students play at the festival every year with a major artist. This year they’re playing with Omar Sosa, who is a Cuban pianist who has a lot of Israeli and African influences in his music. He’ll be working with the students in the summer and then perform with them at the festival.

A neat program I started just this year is called the Detroit Resident Assemble. The idea is that a very high-profile artist works together on a regular basis — comes in to the city, puts on master classes, rehearsals and special programs — and then presents multiple programs at the Detroit Jazz Festival in different ways, from small groups up to full symphony orchestra.

EngageD: As president of the Detroit Jazz Festival Foundation and a professor at Wayne State, you have a unique chance to connect students to opportunities that they may not have received otherwise. How does that work?

Collins: It’s a great example, I think, of when a faculty member uses the fullness of their professional life,— when it’s appropriate and right — to bring in Wayne State students and faculties into these opportunities. We have additional resources because it’s in collaboration. The end result, though, is that we’re providing opportunities for students that can easily lead to exposure to major artists.

This is sort of my general philosophy with everything, from when I brought (philanthropist and jazz fan) Gretchen Valade in. (Note: Valade, a philanthropist and noted jazz aficionado, recently committed $2 million to create an additional performance space in the future Gretchen Valade Jazz Center at Wayne State University.) From that role, and my role in the music department and in the community, I’m looking for what different ways can we provide opportunities for our students. Then, I work to remove barriers so they can participate in those opportunities, which is the second step that is often neglected. Sometimes it’s [providing students with] transportation, sometimes it’s translating things into other languages. Whether its international stuff or whether its local community outreach, I want to get them involved as a full artist so they have a full life experience as an artist in Detroit.

So, they’re connected to the city, they’re connected to these other musicians and they get this unique opportunity to be heard. I think it’s in the best interest of all of us here at Wayne State to look for these possibilities, because of the shared resources presenting themselves. We can do much more that way than if were just trying to own the entire thing ourselves. I look at myself as a bridge to that and, of course, in my playing career. Whenever I can have a student involved in any level, I do it, and I have really found it to be a valuable asset.

Collins: The Jazz Festival itself is the signature event of the foundation, but it is in fact a year-round entity. This way, it becomes valuable to the city and to institutions like Wayne State, particularly because of my bridge between the two institutions. Through the year-round activity that surrounds education — the preparation of new works, rehearsals and master classes that culminate with the festival — the Jazz Festival Foundation is committed to the Detroit Region.

So, most of our educational initiatives are focused in Detroit. Much of our unique programming at the festival revolves around Detroit-area artists and the sensibilities of our city.

When we talk about the educational programs, what I have tried to do in my life here at Wayne State and throughout my entire career is to look for opportunities to use my credentials and professional opportunities to provide unique opportunities for students and faculty that might be able to get them involved when they first come to the city.

So, there are programs year-round. There’s one called The New Infusion program that I started in 2011. It focuses on Detroit Public Schools. We work through the fine arts with the director of fine arts, Willie McAllister. We have up to seven schools a year, mostly high schools, sometimes a couple of middle schools. I have an “Artist of Note” from Detroit, several of whom have been members of our faculty. They are assigned to a school like Cass, King, DSA, Duke Ellington, Renaissance, etc., and they go there twice a week. They teach jazz to the students and work with the jazz band instructor at those schools to help rebuild some of that structure that has been challenged in the last couple of decades. We get some Wayne State connectivity. We give a student here an opportunity to work directly with a major artist in a school setting, which hopefully opens the mind to creativity and educational opportunities. Also, it reminds us all that we all have to eventually become mentors in all that we do.

EngageD: Do any of these programs offer the high school students the opportunity to perform at the professional level or work with professional artists? Perhaps at the Jazz Festival, or other events held by the Jazz Foundation? 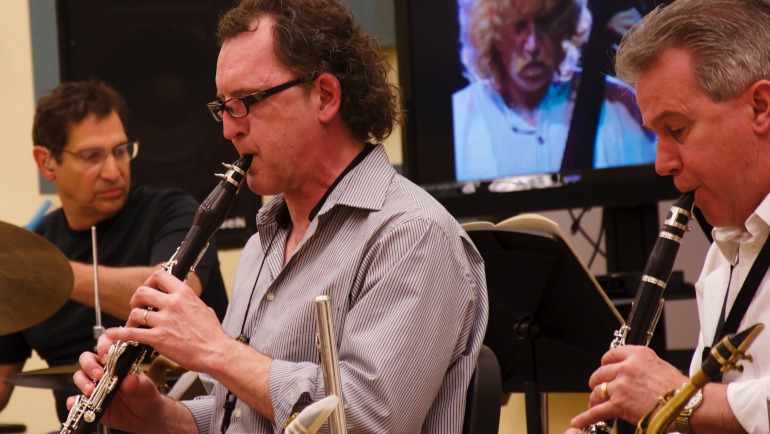 Collins: The J.C. Heard Jazz week program! It is also for high school students, and is something I started 11 years ago. My initial design was that up to about 40 students can audition into the program. No one can pay, and no one has to pay. It’s all based on talent. You get in on an audition. You have one week of intensive study — all day, from 10 a.m. to 4 p.m. — with jam sessions and concerts with national artists in the evening. Our faculty teaches, along with students that serve as mentors in the program. The students study small group, they study big band,and they study theory.

Every year, for the last five years I’ve brought Shannon Powell, one of the great drummers from New Orleans, to teach the New Orleans tradition and the history of the New Orleans bands. He teaches students that end up forming what we call “Dr. Valade’s Brass Band,” after Mrs. Valade’s honorary doctorate from Wayne State.

Dr. Valade’s Brass Band opens the jazz festival every year and includes all of the participating students playing traditional New Orleans music under the guidance of Mr. Powell. Then we also pick an all-star group each year and they are presented at the festival, presented on the “Wayne State Pyramid Stage.”

EngageD: How instrumental have Detroit in general and Wayne State in particular been in the evolution of jazz music?

Collins: In modern times, we are known for techno or Motown music, but jazz is in the DNA of Detroiters. Detroit can brag about a very unique relationship with jazz. And the two shape each other. Many of the great Detroit jazz artists, many from Wayne State, went on to establish the 1950s and ‘60s vocabulary that became modern jazz vocabulary.

It’s always important to note that, when we talk about those who are going to Wayne State and those who have went here, we’re talking about Joe Henderson, Curtis Fuller, Pepper Adams, Kenny Burrell, Yusef Lateef. They were all students here at Wayne State. In fact, jazz trombone legend Curtis Fuller just moved back to town, and we’ve been doing some musical things for him and celebrating him. He’s the “Legacy Artist” at the Jazz Festival this year. Curtis Fuller was a student here at Wayne, and his roommate was (saxophonist) Joe Henderson. Want to talk about a powerhouse moment?

So, Wayne State has a lot to celebrate with its connection to Detroit and that jazz legacy. And we should not overlook that because it gives a certain framework to what we do here and our connectivity to the urban sensibilities and the music of this environment that reflect the culture at large.

For more news and information about our work in Detroit, sign up for EngageD, the newsletter devoted to Wayne State’s community service.