Since its inception, Wayne State University’s Math Corps has redefined the way students view mathematics. From elevating test scores and graduation rates to destroying student fears and stigmas around math, the program has enjoyed huge successes.

Chartered at Wayne State in 1991, the program has drastically improved testing scores for students in Detroit Public Schools. Since 1995, graduation rates for Math Corps students has been around 90 percent, with about 90 percent of these graduates continuing on to college.

The program’s success has not gone unnoticed. Recently, Math Corps garnered international attention and its accomplishments serve as a potential blueprint for African countries. 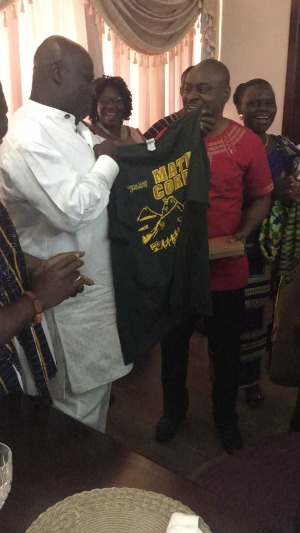 In January, members of Wayne State’s mathematics faculty were invited to Accra, Ghana, for the Centre of Excellence in Mathematics’ international math conference, (CEMATHS). Leonard Boehm, co-founder of Wayne State’s Math Corps, and Darryl Gardner, director of the center’s RSP and ESP programs, presented keynote speeches at the conference. Together, they joined a host of delegates from Ghana to develop and inspire solutions to enhance the country’s lack of education in the STEM field by using teaching strategies implemented by Math Corps.

Now, there’s been a role reversal: Wayne State will today and tomorrow play host to a Ghanaian delegation led by Nana Osim Kwatia II, chief of Amanokromhene & Gyasehene of the Akuapem Traditional Regional.

The Ghanaian delegates will be welcomed on Aug. 8 with a reception at the McGregor Memorial Conference Center on Wayne State’s campus.

The delegation will meet with Math Corps in State Hall on Aug. 9 at 8:30 a.m. for a student panel. Chief Kwatia II will give a short presentation to the Math Corp students about his arrival and about math struggles in Ghana. Following the assembly, the delegation will to observe Math Corps students during classroom and team time.

The visit to Wayne State came after King Osagyefuo Amoatia Ofori Panin, from Abuakwa State in Ghana’s Eastern Region, expressed interest in visiting the program to observe its teaching methods firsthand. Unable to come himself, the king sent the delegation in his place.

The visit is part of an effort by the king, who also developed the CEMATHS conference,  to address concerns about low math scores in many parts of his country.

“In the United States you have poverty with opportunity. In Ghana, we have poverty without opportunity,” said King Panin during his address at the CEMATHS conference. “If you want our children to be educated, we must pay the premium. Buildings don’t teach kids; teachers do.”