They come from all walks of life — but they ride together.

In preparation for the fourth annual Baroudeur — Wayne State’s cycling event in support of student scholarships and the HIGH Program — a group of dedicated and diverse cyclists gathers for weekly training rides on Tuesday evenings. The training rides, which preview much of what participants will see during the Baroudeur on Aug. 18, have brought together many members of the Wayne State community.

The rides can draw as many as 80 cyclists on a good day and are led by Rob MacGregor, who is an avid cyclist and assistant Baroudeur ride director in addition to his role as senior director of philanthropy at Wayne Law.

“Through the years, these rides have become an event of their own,” MacGregor said. “In that first year, people were scrapingthe rust off their bikes and excited to prepare for a challenge. As the group has grown — in both their own personal fitness and in the camaraderie among the cyclists — it’s become about so much more.”

Tom Page, an advocate for Detroit and the local cycling community who has served on the Baroudeur’s volunteer planning committee since its inception, has joined MacGregor in leading the training rides. “The training rides and the Baroudeur itself have helped all kinds of people connect and become further rooted with Wayne State and the city of Detroit,” Page said. “Cycling brings people together in a way that nothing else can.” For many of the cyclists, the training rides, which usually conclude with an informal gathering for tacos at campus watering hole Tony V’s, have been a starting point for meaningful friendships and engaging dialogue. “It’s not always easy to form relationships as an adult,” said Enid Johnson, an alumna who earned a degree in counseling and currently works as a high school counselor. “I’ve been able to build friendships and we stay connected beyond these rides and the Baroudeur.”

Some of these friendships are uniquely personal and, in a few cases, a bit unlikely, according to Jennifer Sheridan Moss, an associate professor in the College of Liberal Arts and Sciences who is training for her fourth Baroudeur.

“There are so many different people from different walks of life here, and I’m not sure that I’d have had the chance to meet them outside of cycling,” said Sheridan Moss. “I’m so glad that I did. It’s the most diverse and interesting group you could choose to have a beer with, and I think our differences make the conversation that much more engaging.”

These friendships and conversations are further enhanced by sharing a tangible experience.

“In the modern world, we all have so many friends who just become a virtual entity in our lives — Facebook friends or text friends. This is exactly the opposite,” Sheridan Moss said. “We get out here, we’re in the fresh air and we’re real people doing a real thing. I don’t talk to these friends by text or by Facebook — I’m with them in real life and I love that.”

For many, the training rides provide an opportunity to improve their health and fitness. Gretchen Pitts-Sykes, an instructor of clinical experience in the College of Education, had very little cycling experience before she began participating in the training rides and the Baroudeur four years ago. Pitts-Sykes will complete the 100-mile route this year and credits the training rides with improvements in her overall health. “I stick with it because it’s great exercise and it helps me de-stress,” she said. “Getting in shape, losing weight and toning up are byproducts of the fun we have.”

For some cyclists, including Wayne Law Professor Stephen Calkins, the training rides have provided more experience and exposure to the city and its renaissance. “In the 20 or 30 years I’ve been in Detroit, I had never been up and down Grand Boulevard,” said Calkins. “Cycling got me there — and many other places. You really learn so much more about the city when you are at ground level, on a bicycle, going slow enough to really stop and appreciate all that’s going on.”

Calkins, who is training for his fourth Baroudeur, believes that bicycling is playing a major part in Detroit’s rebirth story.

“When friends of mine say that Detroit is a derelict war zone on its last leg, I can look them in the face and tell them that I see firsthand on a bicycle the neighborhoods of Detroit. Sure, some are struggling, but there are a whole lot more that are just lovely,” he said. “This city has a whole lot of great things going for it, and cycling has brought in so many people who are now spending time here and really getting to know it.” 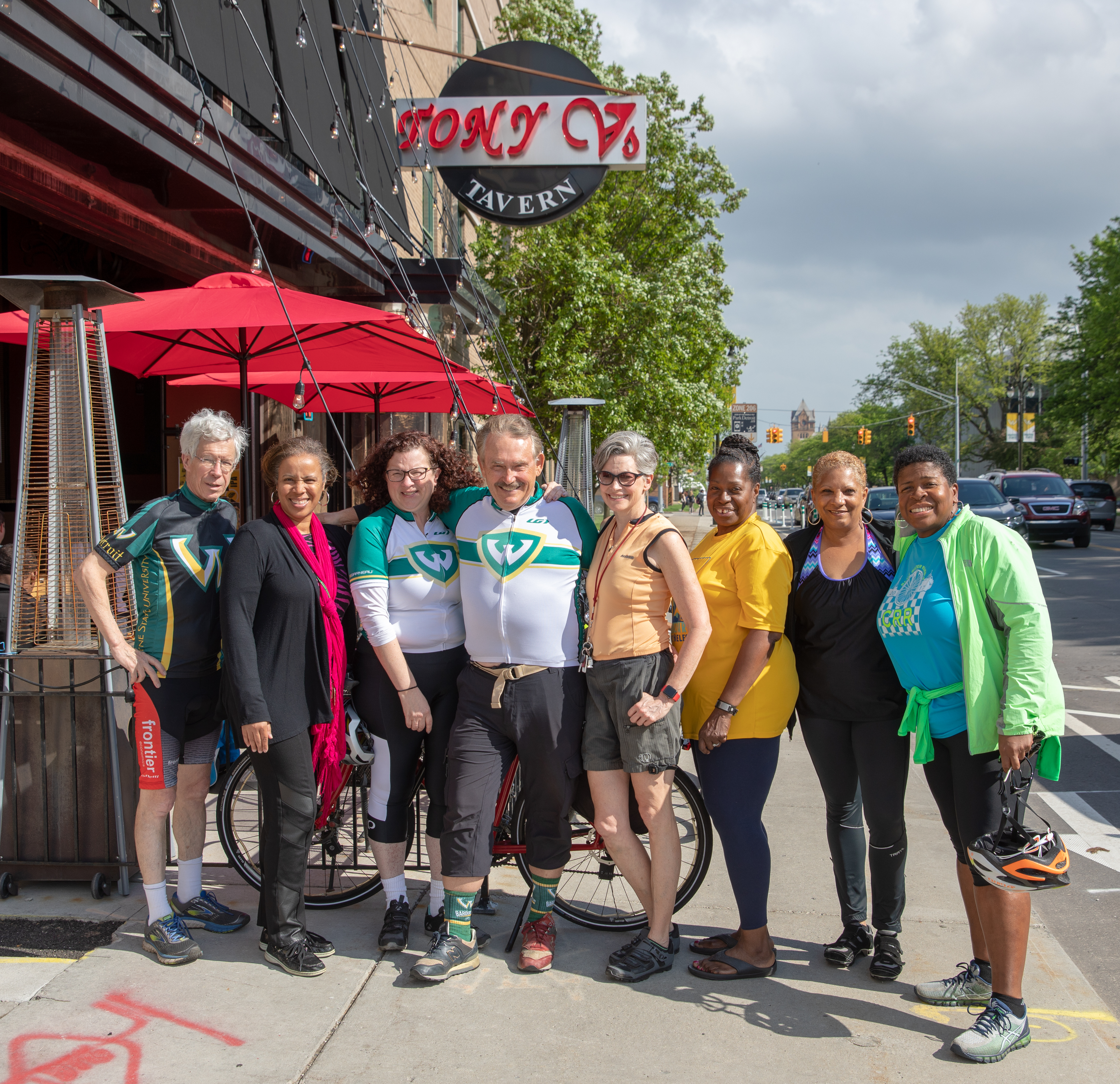 Participating in the training rides and completing the Baroudeur provide many cyclists with a well-earned sense of pride. Cynthia Merritt, an academic advisor in the College of Liberal Arts and Sciences, has participated since the inaugural event.

“I never thought I’d be able to go from riding the Slow Roll to cycling 100 miles in a day, but here we are. That gives me a great sense of accomplishment,” she said. “It’s physical training but it’s also mental training too. Even if you think something is impossible or challenging, you can do it — and that’s a message I’m able to share with the students I work with.”

Cyclists who participate in the Barouduer are also giving back to current and future Warriors. “I was fortunate enough to be supported through my studies by scholarships,” said Pam Murray, a former triathlete and an alumna of the College of Fine, Performing and Communication Arts. “I love cycling and I especially love the Baroudeur because it allows me to pay it forward for current students.”

The event, which raised more than $10,000 for students in need last year, inspires generosity, rain or shine.

“There are some rides that I’ll wait to register for until I can see a good weather forecast,” said Cassandra Spratling, an adjunct professor of journalism and former Detroit Free Press staff writer who documented her experience training for and riding in the inaugural Baroudeur in 2015. “I sign up on day one for the Baroudeur, because I know that no matter the weather, I’m helping students succeed.”

Baroudeur training rides are held every Tuesday leading up to the event on Saturday, Aug. 18. These free, no-drop rides are open to cyclists of all skill levels, with a minimum of three distinct groups based on speed and distance. The group departs at 6 p.m. from Parking Lot 34 on campus. To learn more, visit baroudeur.wayne.edu/training or contact Rob MacGregor at rmacgregor@wayne.edu.