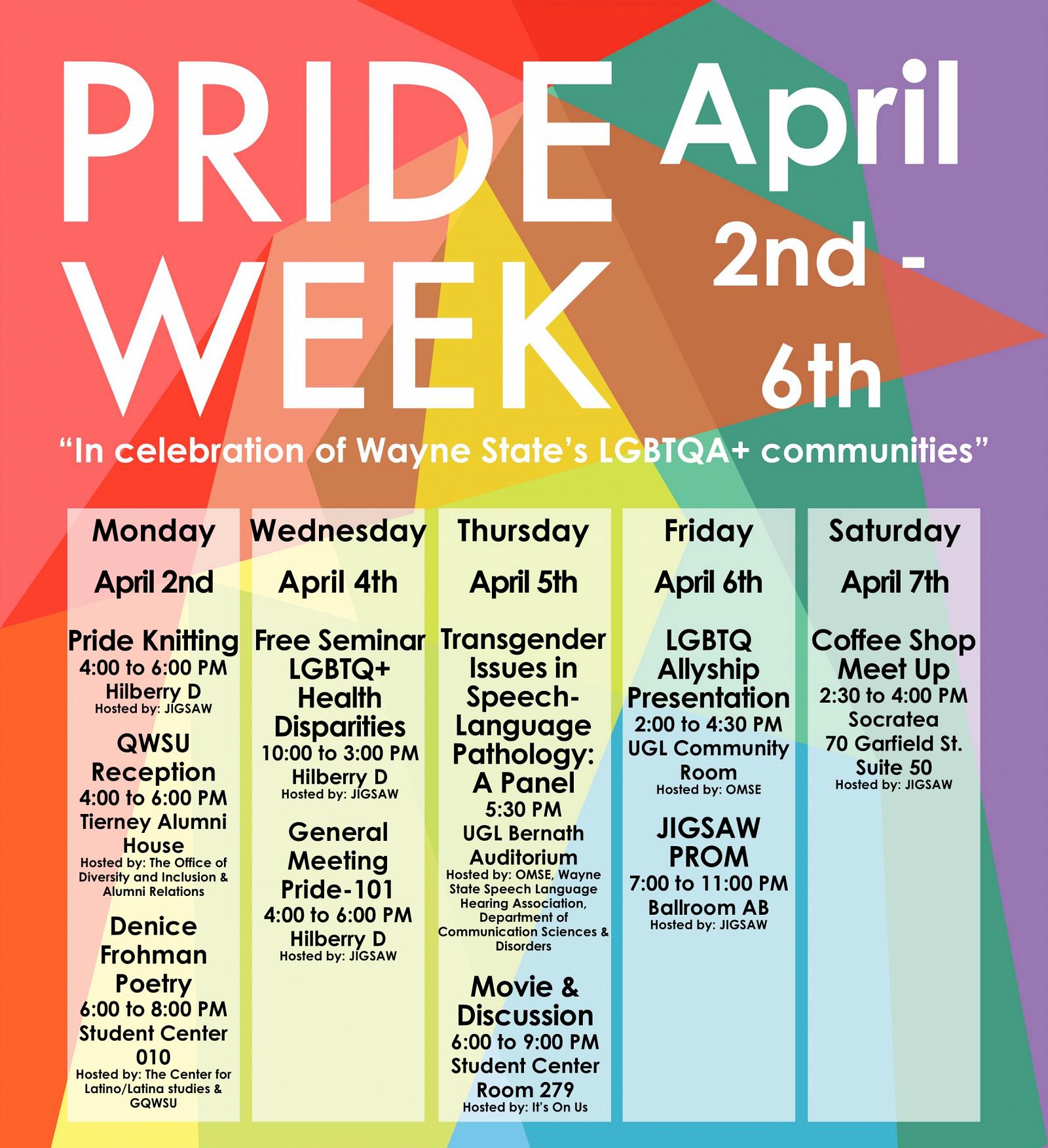 The Office of Multicultural Student Engagement (OMSE) knows that community is key — it’s a place and it’s an atmosphere that the group works hard to cultivate on campus through a range of programming, including the annual Pride Week celebration on April 2-6, 2018.

“Our LGBTQ community is as diverse as our student body,” said Tom Molina-Duarte, an advisor for student engagement and academic advisor at OMSE. “There is not just one type of LGBTQ student — they could commute or live in campus housing, be a veteran or be returning to college after time away, and represent a range of ethnicities, among other characteristics. This gives us a lot of opportunities to connect.”

During Pride Week, OMSE — which is overseen by Associate Provost for Diversity and Inclusion and Chief Diversity Officer Marquita Chamblee — will host a variety of events in collaboration with campus partners. There will be everything from discussions around identity and allyship to a health disparities seminar to a movie-themed prom.

Proceeding from pride to joy, OMSE will host its annual Rainbow Graduation, Awards and Homecoming a month later on May 4, just ahead of the university-wide Commencement at Ford Field on May 8. Rainbow Graduation is a more intimate celebration, and is one of WSU’s signature LGBTQ community events. To participate in the ceremony, students should RSVP by April 27.

“Rainbow Graduation is a unique way to honor the achievements of LGBTQ students and allies,” said Molina-Duarte. “Because it’s also a homecoming, it reminds alumni that they will always have a Wayne State community they can return to.”

In addition to Pride Week and Rainbow Graduation, OMSE hosts Coming Out Week each October, the National Day of Racial Healing in January, monthly forum discussions, film screenings, workshops and more. OMSE works closely with the student organization JIGSAW (Joining Intersectionality, Gender, Sexuality and Allies at Wayne), which helps to forge and strengthen bonds and empower all Warriors to learn how they can support marginalized cohorts. There also are active groups on campus that bring together LGBTQ students of color, graduate students, and faculty and staff.

To learn more about Pride Week, Rainbow Graduation or OMSE, write to tom.molinaduarte@wayne.edu.

A history of forward-thinking
Wayne State has long been a safe harbor for enlightenment and progress. In 1972, the university’s Gay Liberation Front took part in Michigan’s first public LGBTQ march in Lansing to mark the three-year anniversary of the Stonewall uprising — nearly a week of protests and violence following the June 1969 NYC police raid on a Greenwich Village gay club. The demonstrations served as a catalyst for the gay rights movement in the United States and around the world. To raise funds for their trip to Lansing, WSU’s Gay Liberation Front sold apples from a fruit cart on campus.

Throughout the ’70s and ’80s, the LGBTQ community continued to organize. In 1984, the Detroit Area Gay/Lesbian Council held the first ever Pride Festival at Wayne State and welcomed elected officials and community leaders as participants.

In 2012, alumna Dana Nessel, J.D. ’94, spearheaded the Michigan case of DeBoer v. Snyder with co-counsel Wayne Law Adjunct Professor Kenneth Mogill and Wayne Law Distinguished Professor Robert Sedler. They filed on behalf of April DeBoer and Jayne Rowse, a lesbian couple in Hazel Park who sought the right to marry so they could have joint custody of their adopted children. This case helped pave the way for the U.S. Supreme Court’s 2015 landmark decision that legalized same-sex marriage across the nation.

Now and into the future, Wayne State aims to support the LGBTQ community across campus, says OMSE Director Leonard Savala, adding, “We are constantly looking for ways to engage students and keep them on a path toward graduation — the ultimate goal.”