The official portrait of former Dean Jack D. Sobel, M.D., is positioned among the gallery of paintings of the school’s previous deans.

The hanging of the portrait, a tradition that takes place almost immediately after a dean’s term in the office is completed, was delayed for nearly two years by the COVID-19 pandemic. The 20-x-24-inch oil painting by James Tennison now hangs in its rightful place in the hallway along the wall across from the administrative offices on the first floor of Scott Hall. 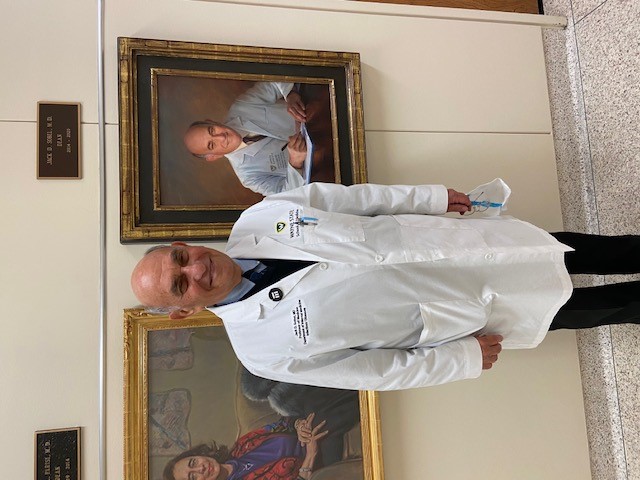 The portrait was initially revealed at a reception given by President M. Roy Wilson for Dean Sobel in late March.

Dean Sobel, who was appointed interim dean in November 2014, full dean in June 2015, and interim vice president of WSU Health Affairs, remains a member of the faculty, conducting research and providing care for patients.

A longtime member of the faculty, with extensive experience in both clinical practice and medical administration, he joined the School of Medicine as a professor of Internal Medicine in 1985. One of the world’s foremost authorities on yeast infections, he was named chief of the Division of Infectious Diseases.

During his deanship, WSU opened the Integrative Biosciences Center in 2015. The $93 million facility dedicated to studying and eliminating health disparities that affect Detroit residents supports researchers from varying fields and enhances their ability to collaborate to solve problems related to human health and society.

That same year, the School of Medicine adopted a new mission statement, the wording of which, Dr. Sobel said, “is much more reflective of who we are and what we strive to accomplish.”
He also oversaw the opening of new clinics or associations with existing clinics, including the opening of the Detroit Public Health Sexually Transmitted Disease Clinic at 50 East Canfield and Woodward Avenue in 2016. The clinic provides screening, diagnosis, treatment and prevention services. Wayne State University and the Wayne State University Physician Group (now Wayne Health) also inked an agreement with Health Emergency Lifeline Programs to collaborate with the Corktown Health Center, Michigan's first nonprofit medical home dedicated to the health needs of the LGBTQ+ community.

Arguably his biggest accomplishment – and challenge – was his recognition in 2015 that the School of Medicine’s longtime role of educating substantial numbers of students from segments of the population considered underrepresented in medicine had diminished, and his efforts to re-establish that position.

The number of minority students had begun to dwindle in the late 1990s and early 2000s, the unintended victim of financial restraints and budget cuts. The decrease bottomed out with the incoming class of 2015. That year’s class of 290 first-year medical students contained five African-American students and two Hispanic students, the lowest numbers in those categories in the school’s modern history. The lack of minority students led to a citation by the Liaison Committee on Medical Education in June 2015. The national accrediting body gave the school of medicine two years to remedy the issue.

Dean Sobel had recognized the lack of diversity in the student body a full six months before the LCME report and took action to reverse the decline. At the beginning of 2015, six months before the citation, he formed the Wayne State University School of Medicine Diversity and Inclusion Task Force to address the paucity of minority students. The task force developed a number of recommendations and presented its findings to the dean in May 2015. Those recommendations included creating the position of vice dean of Diversity and Inclusion, as well as securing funding to establish the Office of Diversity and Inclusion, and to resurrect student recruitment efforts.

Dean Sobel also oversaw a curriculum revision to include an organ systems-based curriculum that blends and reinforces basic sciences and clinical experiences from day one, integrating classroom, self-directed learning and small-group learning with clinical skills, cases, experience and training.

In the fall of 2018, the School of Medicine exceeded an ambitious $190 million fundraising goal. The historic amount for the school’s fundraising efforts was part of the university’s Pivotal Moments Campaign, launched in 2014 with the goal of raising $750 million.