“We've been really successful, and I'm really proud of this program,” said Julia Farner, assistant professor of nursing and Air Force veteran, who teaches many of the program’s clinicals. “I love what it offers our students. Every student who has reached clinical with me has graduated and is currently working as a nurse or is grad school — or both.”

Farner is one of two veterans who help facilitate the program. VBSN students are admitted once a year into an 18-month cohort and do their clinical rotations at the John D. Dingell VA Medical Center in Detroit.

“The program has exceeded my expectations,” said current VBSN student Ryan Oke, a nine-year veteran of the Air Force and current member of the National Guard. “The level we’ve learned at has been amazing. I have a medical background — I was an EMT and firefighter — so I thought this was going to be a breeze. But it really opened my eyes to how much this school digs deep into not just getting you to pass the NCLEX, but to prep you to be a great nurse. It's blown my expectations out of the water with the curriculum.”

A major highlight of the VBSN program for the students is getting a chance to help other veterans at the VA.

“As a veteran, you just want to take care of other veterans,” said Jordan Turner, who graduated from the program in December and now works as an ICU nurse at Henry Ford Hospital in Detroit. “I have two great-uncles that are both World War II vets, and they are going to the VA, so I want them to be getting the best care. One day, I’ll be going to the VA, so hopefully someone will be giving me great care.”

There are many negative stigmas in the veteran community about the VA, but Farner said the students in the VBSN program are able to connect with the patients and give them more confidence in the care they receive.

“We've seen a huge difference with having the veteran students there,” Farner said. “There's plenty of research that says there's an extraordinary amount of distrust with veterans and the medical community for many, many reasons. Vets tend to have really complex health histories — both physical and mental health. What I've seen is, we’ll go into the VA, and they will tell us, ‘This patient has been hard to work or interact with.’ The veteran student will go in there and once the patient knows they are a vet too, usually their eyes light up and the student is able to build a rapport. There’s just a bond between veterans who have some of the same shared experiences.

“I've seen patients open up to students, and students make a lot of progress with being able to provide them with good solid care, both because the patient trusts them, but also because the students have a better understanding than, perhaps, some of the other nurses without a military background,” Farner added. “They know how to communicate with the veteran population and some of the challenges that they may have experienced dealing with the healthcare system.”

Turner admitted he had some negative perceptions about the VA before he started doing clinical rotations there, but now he’s hopeful people will see the improvements.

“I'm not even going to sugarcoat, everybody thinks the VA sucks,” Turner said. “I think by taking Wayne State nursing students in there, and showing veterans that the care is better, is huge. Coming out of the military, there is that negative stigma about the VA, but I got to see firsthand how good the care is, and I would want to get my own care there. It’s also a great place to work, and it’s a good atmosphere for a veteran to work in. A lot of the graduates want to go work at the VA, which I think is really cool.”

The cohort style of the VBSN program gives students a support system of other veterans to lean on during their time in the program.

The students start and complete the program on the same schedule, so they are all going through the program at the same time and facing some of the same challenges and adjustments.

“It's hugely beneficial for them because there's plenty of research that says sometimes they struggle in the classroom because there's a different communication style, there are different experiences,” Farner said of VBSN students. “Veterans tend to be a little bit older than your traditional students and have different life experiences. Being in a group with other people who understand that is really beneficial to them. They really build a bond together — even to the point where I had a number of students who graduated from the program reaching out to me saying, ‘I'd love to help with the program.’ It's really cool for me to see. I’m a veteran as well, so I understand that camaraderie. I understand that bond, and it's great for me to see the students come together.”

Turner said he would often hang out after class with some of his cohort members, and many have kept in touch after graduation.

“For me, it was helpful to have people you have something in common with instead of trying to fit in with these 19- or 20-year-old nursing students,” Turner said. “We all still talk. It's crazy — some of us talk, like, every day. During the program, we were texting each other and hanging out. It’s nice to have someone to study with or have a someone to rely on if you need to vent because you did bad on a test. We could all hang out and do something to get their mind off of it.”

I’on Jarmond served 20 years in the Navy before retiring. He recently graduated from the program and is currently enrolled in the doctor of nursing practice with a family nurse practitioner clinical specialty program at Wayne State.

Jarmond felt like the cohort was a team, working together to make sure all of them graduated.

“What I loved about it was how we stayed together, because that's kind of like what we do in the military, no man left behind,” Jarmond said. “We're all from different walks of life, different services and stuff, but when we were in the veteran program, we naturally gravitated toward each other. We had a sense of camaraderie. I think that’s really important because you can't accomplish much in this world without teamwork. I think having a military background, you kind of get that, and then, when they put us together in a program like this, it works out well because we already know what we have to do.”

“I'm not from Detroit, I'm from Oklahoma,” said current VBSN student Casey Guevara, who served nine years in the National Guard in Oklahoma and Texas. “I moved here at the beginning of a pandemic, and I’m put in this group of people that I’ve never met before. But we've all been in a situation where we've been shipped off, we don’t know anyone, and we’re expected to bond and work together, so we’ve done it before. I came in and there just wasn’t a question, we all knew we’re in this together. It was really nice.” 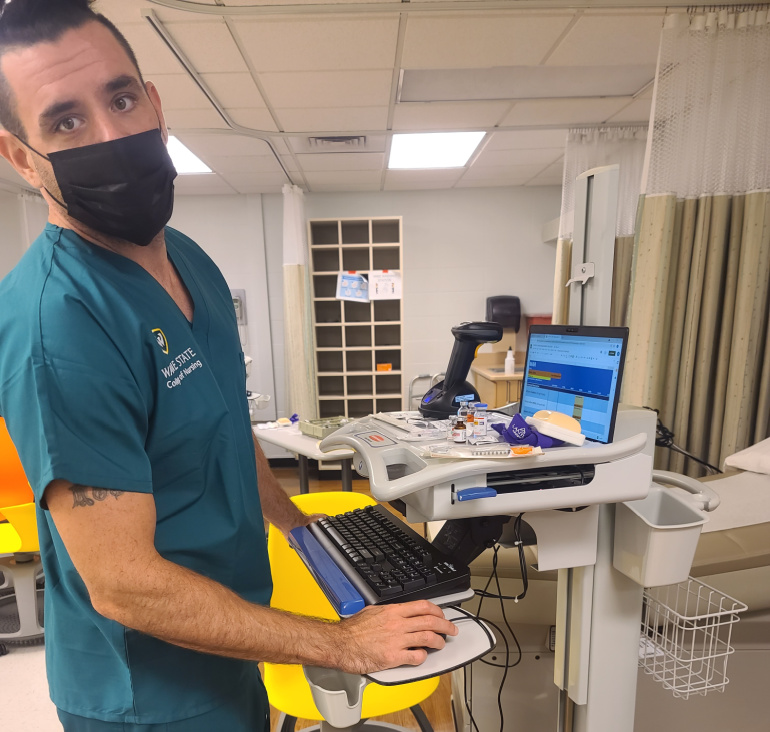 Many of the students in the program also appreciate that the program has veterans like Farner in key roles.

“She's very passionate,” Oke said of Farner. “Other professors give us the knowledge we need to pass their specific class, but Dr. Farner is with us throughout the entire program. She does everything in her power to not only teach us what we need to know for clinicals, but make sure that we're going to be successful in the entire program and be successful once we're done with the program. She wants us to be great nurses. When we started, she kind of laid out the ground rule that none of us will fail, because she will not allow it.”

“She was probably the highlight of the program for me,” Turner said of Farner. “She was able to meet the needs of every student in the program. She showed she actually cares. She really got to know us and did a good job of keeping us together because we kind of relied on each other the whole time.”

Jarmond said he’s seen members of his cohort have success after graduation because of the quality of the program.

“I think it's a great program — the statistics speak for themselves as far as the NCLEX,” Jarmond said. “I felt I was overly prepared when I took the NCLEX, and I passed it the first time. Wayne State has so many resources, and I always refer people to Wayne State when they ask me about nursing school. The nursing program is very tough — it was no cakewalk. But it's very doable with the resources and the faculty. Kudos to everyone involved. It’s why I decided to stay at Wayne State for my FNP program. I came back to Wayne State because I believe in it.”

Farner enjoys hearing the praise from her students because she is very passionate about the program and seeing the students succeed.

“I love this program,” Farner said. “I think it does really great things for our veteran students and our community. I've seen huge changes in the VA after having our students there. It’s changed how the nurses interact with patients since we’ve been there because they’ve seen our students have success working with the veterans.