Set design major making the most of opportunities at Wayne State

During the height of the COVID-19 pandemic, people found new ways to connect while doing the things they enjoyed. Alec Ehnis-Clark was part of a group of Wayne State University theatre students who did just that by staging virtual shows for students in the Detroit Public Schools Community District.

“We would decide on themes every week, and five or six of us would make videos aimed toward kids that were theatrical,” Ehnis-Clark said. “We would do staged readings over Zoom or make individual videos based off of children’s books and upload those to the official theatre YouTube page.”

Ehnis-Clark will graduate this May with a bachelor of fine arts in theatre design tech (scenic). During his college career, Ehnis-Clark designed sets and props for several productions, but he noted that the virtual shows allowed him to get even more creative.

“It was nice to be able to visualize something and know that I have a captive audience,” he said. “With children’s theatre specifically, there’s a lot more creative freedom and doing things outside of the box. It’s fun to try to figure that out.

“A lot of the books that we used I read when I was a kid,” he added, “so it was nice to revisit those and visualize them in a way that I think would be appealing to kids. Having feedback was nice too, because it showed that it was worth it and entertaining, which is the main goal.”

Last fall, Ehnis-Clark designed the set for the Department of Theatre and Dance’s production of Everybody.

“It was it was in Hillberry Theatre, which is a big stage comparatively,” he said. “It was awesome because it was this huge set that I could design, and it was a fulfilling process. I was working on it over the summer, so I put a lot extra time into it — and I think that paid off with the look of the show.”

Ehnis-Clark submitted his work on Everybody to the Kennedy Center American College Theater Festival and earned the Jane Childs DTM Legacy Award for his standout design. He said he was confident designing Everybody because of the experiences he had at Wayne State.

“The professors spend a lot of time teaching the whole process,” he said. “You never feel rushed at all when you are learning how to design. There are a lot of resources artistically and lessons on how to how to do things. Hands-on set building is really important.

“We also get to do full productions, which is the most fulfilling part,” Ehnis-Clark continued. “That’s what we’re here to do, and the faculty is helpful in establishing that and being there to help us.” 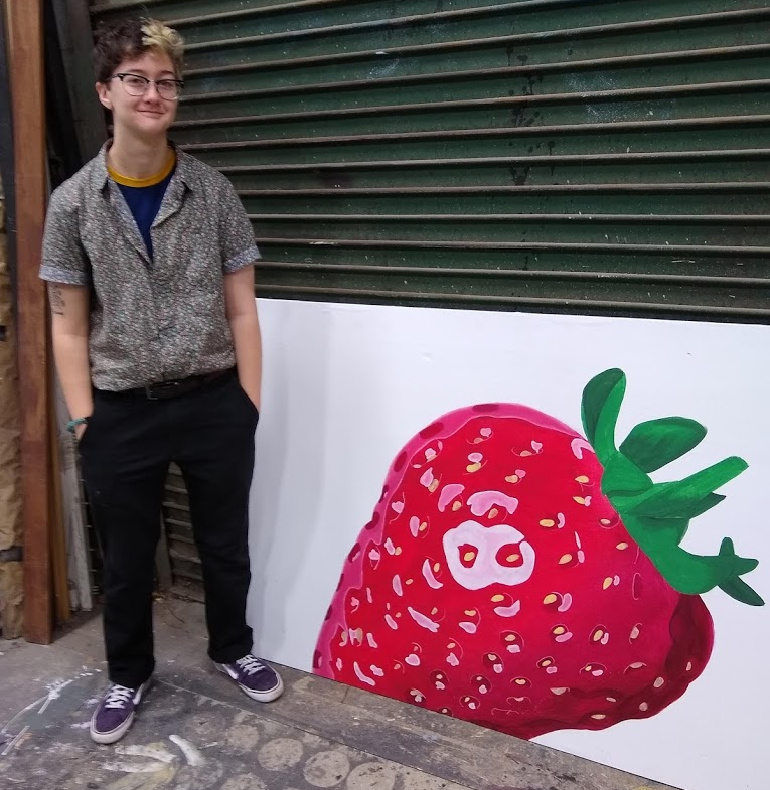 Ehnis-Clark enjoyed having access to work in the scenery shop and the theatre at Wayne State. He also earned a minor in art history, which has helped him analyze and process different designs.

“The freedom of expression and the access I had to the theatre here was rewarding and helped me grow a lot,” he said. “I wouldn't be able to do this if I didn’t have a scenery shop down the street and theatres right there that I could work in.

Ehnis-Clark also worked at the Ringwald Theatre in Ferndale and plans to stay in metro Detroit for a year or so after graduation to continue building his portfolio before applying to graduate school. His ultimate goal is work in the Chicago theatre scene.

“My family is really supportive of me doing theatre,” he said. “My parents both did theatre in college. They always come to see my shows. They’re very supportive about my designs.

“My friends are supportive too,” Ehnis-Clark added. “They’re mostly theatre and arts people, although they don’t usually do scenic design — but we compare our theatre stories, and it’s helpful because theatre is a big time commitment. It can get a little overwhelming, but having other people that know the process and can talk through it with you is really nice.”