While athletes from around the world compete at the Olympics, there was once hope Detroit would enjoy that same spotlight.

Between 1940 and 1972, Detroit tried and failed nine times to bring the Summer Games to the city. While the city still has yet to host the Olympics, one of those attempts changed the face of Wayne State University.

The Matthaei Physical Education Center was built in 1965 as part of the city’s bid to bring the 1968 Olympics — ultimately held in Mexico City — to Detroit. Covering 42 acres and nearly 94,000 square feet, the facility was part of the larger vision of its namesake — Frederick C. Matthaei. 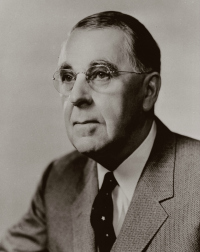 Matthaei — a native of Detroit and graduate from the University of Michigan — made it his life’s mission to bring the Olympics to his home town. In 1936, he formed the Detroit Olympic Committee and served as chairman until 1964. The 1964 Olympics were the closest he’d get to bringing the world’s athletes to the Motor City.

In one of his appeals to the International Olympic Committee, Matthaei, who was quoted in the Nov. 18, 1954, Detroit Free Press, told the committee: “Detroit in an hour of need became the Arsenal of Democracy. Its war goods helped the cause of freedom. Now it wants the chance to work for lasting peace, by staging the Olympic Games.”

After failing to earn the bid in 1960 and 1964, Matthaei attempted once more to make the case that Detroit could host the Summer Olympics. As Matthaei publicly passed the hopeful Olympic torch to then Michigan Gov. George Romney and Detroit Mayor Jerome Cavanagh, he was busy organizing the bid behind the scenes. 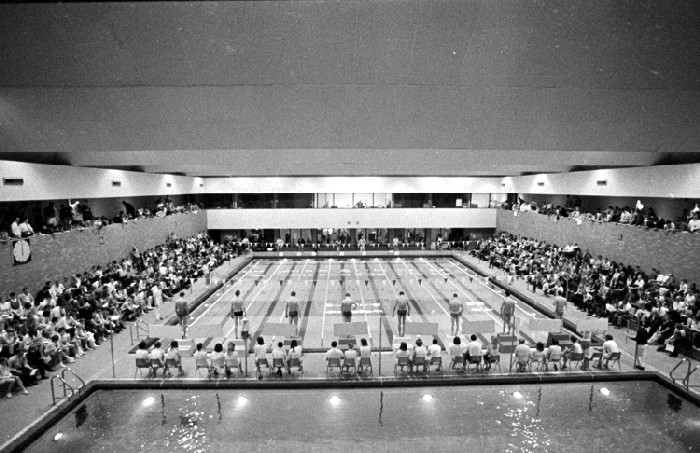 Ground was broken June 15, 1965, for the Frederick C. Matthaei Physical Education and Recreation Building. At the time, it represented the first major step in Wayne State’s physical education building program and was the first WSU structure on its “west campus” southwest of the John Lodge-Edsel Ford expressway.

The 27,000 square feet of inside space was built to be divided into three separate units for men’s and women’s basketball, fencing, volleyball and other activities. In addition, it was built with two swimming pools (an eight-lane 25-yard competition pool plus a separate 45-foot-by-60-foot diving pool).

All of this was before Jerome “Buck” Jerzy’s time. Jerzy, 81, was sports information director at Wayne State from 1959 to 1962. He remembers the WSU basketball team playing its games at the University of Detroit Mercy’s Calihan Hall. 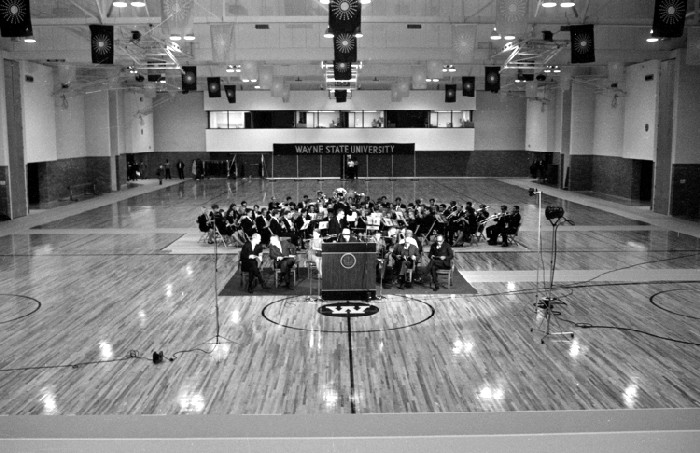 “We used to practice behind Old Main, in like a little Quonset hut,” Jerzy said. “Tartar Field, for the football team, used to be on the northwest corner of Lodge and I-94. The press box was on scaffolding.”

Jerzy said he remembered Matthaei being a big name in the city, mostly to do with his Olympics push. But at the time Jerzy was here, Matthaei wasn’t as involved in Wayne State.

When the Matthaei Physical Education Center was dedicated on Oct. 27, 1967 (photo, left), it included such notable guest speakers as then-U.S. Supreme Court Justice Byron White. In addition to serving on the highest court in the land, White had also been an All-American college player who later played pro football for Pittsburgh and Detroit. White and Matthaei were friends who met while White was with the Lions in 1940 and 1941.

In the end, Matthaei’s preoccupation with the Olympics helped to give WSU a natatorium, three basketball courts, offices for both athletics and kinesiology, classrooms, a dance studio, the WSU Athletic Hall of Fame, and two weight rooms (one for classes and one for WSU student-athletes).  In the Hall of Fame, 231 honorees are recognized for contributions dating back 99 years. The hall was completed in 2001.

Parquet flooring was added in the summer of 2004 — in the style of the Boston Garden — and re-done in the summer of 2014. New bleachers were installed in July 2011 following the addition of chairback seats behind both the home and visitors bench area.

This article was first published on August 9, 2016.