On a brisk autumn morning at Munger Elementary School in southwest Detroit, a first-floor kindergarten class is in full swing. As teacher Lisa Briegel runs through the day’s first lesson — a phonics exercise emphasizing words with similar-ending syllables — the 5-year-olds arrayed in front of her wriggle and bounce in their seats, some raising hands to be called on while others blurt answers in impatient outbursts.

Nearly all of the 30 or so children appear engaged. But for all their wide-eyed captivation, no student in this kindergarten classroom is as focused as the tall, 40-something woman assisting Briegel from the rear of the room, her hands clasped, her eyes studying the teacher’s every word and gesture. 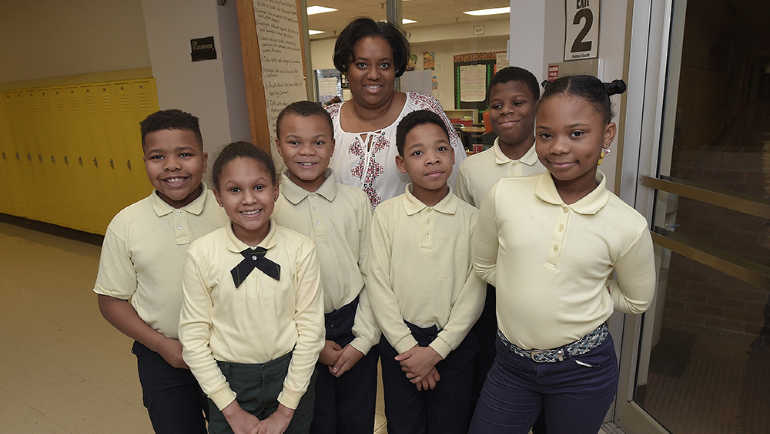 Along with six other College of Education students, McCall has been stationed at Munger as part of their participation in the university’s cutting-edge TeachDETROIT residency program, which embeds aspiring teachers in city schools for hands-on classroom training, mentorship from veteran teachers and real-life interaction with students’ families.

“This is a much better approach than the traditional way of training teachers,” said Rambo-McCall. “When you go to college, often you’re just sitting in a university classroom for four years. You need that undergraduate work, but you also want to begin work in your field.

“With this model, you go into a public school classroom and you’re actually teaching. You find out early whether teaching is for you or not. I think a model like this would’ve eliminated a lot of bad teachers. They’d know this might not be a good fit for them without having to waste four or five years pursuing a degree.”

Indeed, by applying a discerning, clinical approach to training, TeachDETROIT turns Detroit public schools into equal parts training grounds and classrooms for its WSU cohorts. Participants  — most of whom already come equipped with at least a bachelor’s degree — enroll for up to 12 months in the program, splitting time between classwork at Wayne State’s campus and training alongside veteran teachers in real public school classrooms.

Established in 2015, TeachDETROIT has become a model program for education experts nationwide and a vital asset to the Detroit Public School Community District, which has grappled with shortages of capable teachers and other resources for years.

“If you are in public education and you care about the achievement gap and you care about every kid — especially children of color living in poverty — getting a great education, then Detroit is the place to be, for a lot of reasons,” said Jennifer Lewis, a veteran mathematics teacher and professor of mathematics education who, along with other WSU faculty, founded the program in 2015. Jeffery Robinson, a veteran Detroit educator, is also a partner in the program.

“As the city tries to find itself again,” Lewis continued, “there is really a discussion about how education is key if Detroit is ever going to come up again. All my interest and all my work has been on creating excellent public schools, especially for children of color living in poverty. We know how to do that. It’s not rocket science. We actually know how to do it, we could do it.”

Still, Lewis noted, many universities stick to training methods that don’t necessarily prep teachers for some of the challenges they face in Detroit.

“We are trying to prepare people very broadly,” she said. “So if you want to teach in Farmington Hills or Chicago or somewhere in Texas, that’s the training. I knew that this involved something special. I knew that to work in Detroit, you have to train in Detroit. And you’d have to find great teachers in Detroit to learn from, in part because you almost need to prove to people that it’s possible. If you have people who are doing amazing work with the most under-resourced and under-served kids then you see that and think, ‘Hey, I can do this, too.’ And those are the people you want to learn from — not just from the textbooks on campus.

To underscore her point, Lewis noted that from the time each new cohort starts in the spring/summer semester, TeachDETROIT students spend far more time in elementary school classrooms than on the WSU campus. Residency begins almost immediately.

In fact, even as TeachDETROIT students take their initial university courses in the spring — covering subjects like bilingual and multicultural education — they also shuttle to and from local public schools, where they prepare for placement in a public school environment.

“We want them thinking early in their training about serving all kids and to recognize that all kids come with strengths,” explained TeachDETROIT project coordinator Barrie Frankel, who assumed oversight of the program’s day-to-day operations in 2018 after Lewis took a position with the Detroit Public Schools Community District. “It’s really important in this environment to orient yourself that way.”

Early in the process, the brand-new teacher trainees gather in one classroom. Lewis and Frankel say this helps ensure that the students — most of whom are graduate students — enter the training process with the right outlook.

“We put them together in one classroom so that we all see the same thing and can process the same thing,” said Frankel. “They’re all teaching the same activities and watching each other.”

The trainees begin with small tasks in the summer, working with one or two children in controlled settings. Eventually, they are paired with veteran teachers who work with them to expand their skill sets.

“By the time they’re at a school in the fall they actually have some really nice skills under their belts,” said Lewis. “They start by just teaching one child, then they teach two, then three, then they’re teaching a small group. By fall, all of them are teaching small groups, and some are starting to teach the whole class.”

The initiative has trained its teachers — about 25 students in total — in schools throughout the city. TeachDETROIT students currently work out of Munger, Coleman A. Young and Bennett elementary schools. Previously, the program also worked out of University Prep Science and Math Elementary school.

“We also end up in schools that want to host us and that have teachers who are interested in learning to help other teachers teach, an idea that is not automatically baked in with all veteran teachers,” said Lewis. “You might be a great teacher, but it’s very different from helping an adult learn a new profession. It turns out to be a very different skill set, and teachers are insanely busy. They do not sit down all day and they have 30 cases in front of them at the same time. It’s just nuts. And so to say, ‘Yeah I’m willing to take part of my day every single day to talk it through with a student teacher’ — that’s asking a lot and not everybody wants to do that. But at the schools where we work, the teachers want to host and the principals want to host us, too.”

“I really enjoy watching the teachers I work with,” said Rambo-McCall who, along with another TeachDETROIT student, shares time with teachers Lisa Briegel and Amanda Hohf in one classroom. “They have different styles, so you get to learn a lot. You see what works well for one or the other, and they’re both super knowledgeable. I can ask them anything, share ideas and let them know what I discovered while doing things like going over lesson plans with them.”

For Victoria Diego, another TeachDETROIT participant, the streamlined nature of the training is as attractive as the chance to learn directly from veteran teachers. Diego had already obtained an M.B.A. and a law degree years before deciding to seek her teacher’s certification, so, like McCall, she was looking for a chance to delve directly into her area of study rather than first wade through undergrad courses she didn’t see as relevant to her aims.

“I was in the military, so I can see that TeachDETROIT does some of what the Army does in that it provides what they call ‘just-in-time training,’” said Diego. “They’ll put you in a position, and then they’ll get you certified, get you educated so you can do that job. The TeachDETROIT program, to me, seemed to be modeled after that, so I thought that was for me the way to go.”

While TeachDETROIT allows participants a more direct path to a teaching certificate, the steps students take are still deliberate and, in many instances, slow.

“They meet at the schools where they will be working,” said Lewis. “And they learn the same things — like theory — with us, and we read the same textbooks. They do the same little lectures, but then they actually have to do what we’re learning in the theory. So, for example, if you’re learning how to teach reading, if you’re learning how to help children learn beginning sounds, we actually script a little lesson for them where they take that theory and try it out with third graders.”

Initially, TeachDETROIT students are given only a few minutes to share the lesson with the children before they turn the reins back over to the veteran teachers. The student teachers then have their performance critiqued;   this feedback process is one of the major areas where TeachDETROIT sets itself apart.

“It’s all very gradual,” said Lewis. “You start out with teaching 10 minutes. Then by the end of that first week, it’s 20 minutes. By the end of the second week, you’re doing 40 minutes and now maybe your group is getting a little bigger, so you start out with two children and then maybe by the end of the second week, it’s six children. It’s growing in complexity. It’s all day, so it’s very intense. If you’ve been a traditional college student, you’re not used to being around children starting at 8 a.m. The summer is an intense experience, but we really like it because we’re all together. We are all in the same classroom.”

And the evaluation process isn’t based on just random observations. Under the TeachDETROIT model, student teachers are filmed while working in the classroom, their performances later dissected by TeachDETROIT leadership and peers in an effort to help the burgeoning teachers improve. In some ways, the film study reminds less of teachers being trained than of football players prepping for a big game.

The comparison is not unintentional. “What we did in conceiving the program originally was look at the way other professions train,” Lewis said. “Especially professions where there are very high stakes, and there’s a big investment in excellence. One of them was a medical model, which is how we came up with something sort of like grand rounds. Almost like that. And the other actually came from sports, such as how professional athletes video themselves and get a critique every day.”

Frankel, who said she learned through more traditional training models, said she hoped the TeachDETROIT approach would catch on elsewhere.

“I wouldn’t be surprised if all of a sudden there is a movement toward this because, other than the fact that it’s a really effective way of learning, it’s a really effective way of teaching,” said Frankel. “Our students don’t work from a textbook. For the most part, they videotape themselves, discuss their learning, videotape their teacher and observing that. It’s real-life learning.”

And for those in TeachDETROIT, there’s no better way to prepare for real-life teaching.