‘Tales from the Reuther Library’ podcast explores Detroit’s haunted past

This year, the Walter P. Reuther Library launched a new podcast, Tales from the Reuther Library, that offers an opportunity for archivists and long-term researchers to share stories they've uncovered in the Reuther's archival collections documenting the American labor movement, modern Detroit and, of course, Wayne State University. 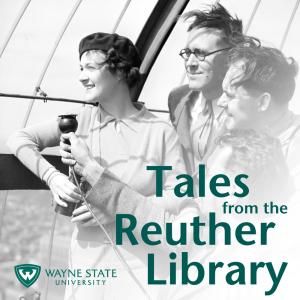 Just in time for Halloween, a spooktacular episode will air later this week featuring supernatural stories found in the Reuther Library's Folklore Archive, the oldest and largest record of urban folk traditions in the United States, compiled from thousands of Wayne State student field research projects conducted between 1939 and 1995.

"It's an approachable way to share what we and our researchers have learned from all the boxes and folders in this building," said Dan Golodner, co-producer and American Federation of Teachers archivist. "History nerds might not have the time to dig through all those boxes themselves or to read someone's dissertation, but they might find time to listen to those stories while driving to work, washing dishes or walking on the treadmill."

Future episodes will include 1970s-era workplace opioid treatment attempts and a closer look at the Wayne State University Mace. Listen to Tales from the Reuther Library at reuther.wayne.edu/podcasts or subscribe on your favorite podcast app.

"It's a new way to share our history," said Troy Eller English, podcast co-producer and Society of Women Engineers archivist. "And it's fun."