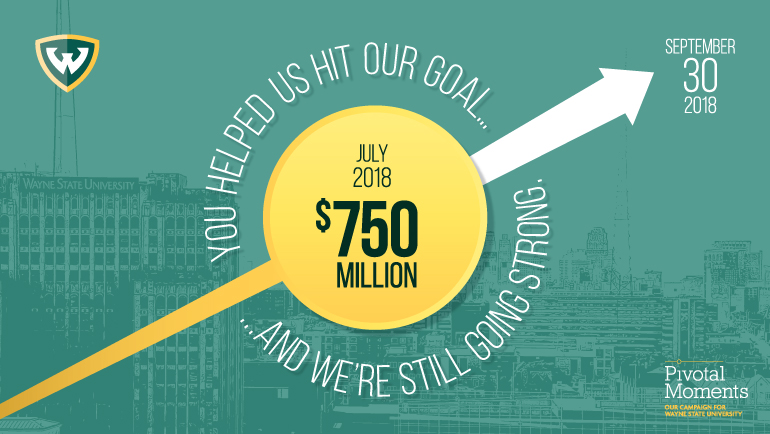 Wayne State University has successfully reached the $750 million goal for its comprehensive fundraising campaign, Pivotal Moments: Our Campaign for Wayne State University, three months early. Alumni and friends will still have time to participate as the campaign moves toward its targeted close date of September 30, 2018.

“This is a very special moment for Wayne State,” President M. Roy Wilson said. “This campaign was timed to conclude this year while celebrating our 150th anniversary, and we have been embracing our look back while working toward the future. The impact of the support we received from our alumni, friends, and faculty and staff during Pivotal Moments — nearly 84,000 donors and counting — is already being felt and will endure for decades.”

Publicly launched in October 2014, Pivotal Moments is Wayne State’s most ambitious fundraising campaign, supporting students and programs throughout the university. The campaign focuses on key priorities of student success, research and faculty support, facilities and spaces, and community outreach.

The primary fundraising goal involves student support. In that area, more than $125 million has been raised to create new or enhance existing scholarship funds for students. Another key goal of the campaign is for at least one-quarter of funds raised to be new gifts toward the university’s endowment. To date, the amount of new endowment commitments has exceeded the goal by five percent. An additional $23.7 million has been designated for non-endowed scholarship support.

“Wayne State has been in Detroit making an impact for 150 years,” said Susan Burns, vice president of development and alumni affairs. “The gifts received during this campaign allow us to look forward, build on our strengths and take students and faculty to higher levels of achievement.”

To mark the end of the successful campaign, in tandem with its 150th anniversary, Wayne State will host a special on-campus celebration on Friday, October 26, 2018.

Some of the significant gifts in support of Wayne State throughout the Pivotal Moments campaign include: