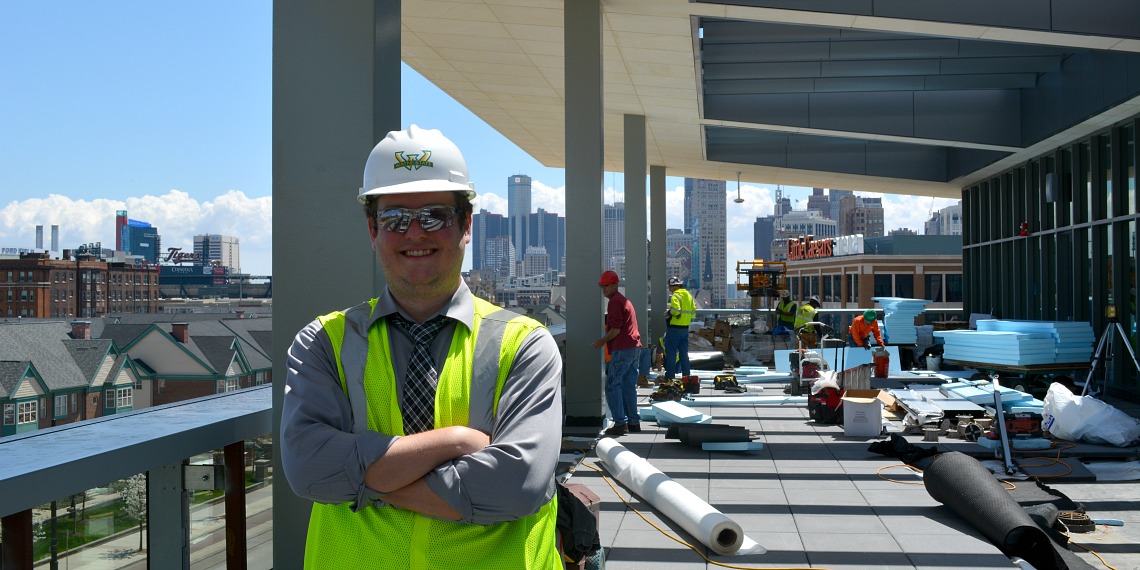 When Marc Ledent was 18 years old, he took a summer job on a construction site. Little did he know that six years later he would oversee some of Wayne State University’s largest building projects.

As construction project manager at Wayne State, the now 24-year-old Ledent supervises development of the $59 million Mike Ilitch School of Business, which will open in fall 2018. No small feat, Ledent was recently recognized for his current and past work in Crain’s Detroit Business’ “Twenty in in their 20s” list. The coveted recognition program highlights young professionals who are making their marks in the region.

“To be honest, I was surprised they selected me,” Ledent said. “I looked in their past lists once I was nominated, and there really aren’t a lot of construction-type people. It’s usually more entrepreneurial and things like that. I’m humbled to be included.”

Ledent’s current role is to monitor the Mike Ilitch School of Business’ project budget and schedule, working with consultants and contractors to ensure that everyone is on the same page. Ledent, who came to Wayne State in September 2017, had only been on the job a few months before his current leadership position fell into his lap after the retirement of his supervisor, Anne-Lee Vandenbussche. The ease with which he picked up the increased responsibility hasn’t gone unnoticed.

“I’ve been consistently impressed with Marc’s management of this project, especially considering that he came on board midstream,” said Mike Ilitch School of Business Dean Robert Forsythe.

Although it’s not uncommon for Ledent to put in 50- to 60-hour work weeks to keep up with the work load associated with projects of this size, he said it’s been worth it to help carry the project to the finish line.

“What I really get out of this is going down to the project site, seeing what we’ve done and being a part of that,” he said. “It’s cool to see the tangible results of your work and feel that closeness to it. It’s not abstract.”

Ledent, who graduated from the University of Michigan-Dearborn, also is on track to complete his master’s in civil engineering in Wayne State’s College of Engineering by the end of this year.  Coming to work for Wayne State, he said, was an easy decision to make.

“After I had the job interview, it felt right,” Ledent said. “Working in Detroit again played a factor, too. I’ve worked in Detroit, practically, since I was 18 years old. To be able to come back, keep building things down here and be part of that renaissance, it was hard to turn down.”

During the 2015 and 2016 construction seasons, Ledent worked extensively on the M-1 RAIL project in downtown. The experience on a large-scale, full-reconstruction project exposed Ledent to many more aspects of roadway construction, and helped prepare him for his current position. The M-1 RAIL, a public-private partnership project, also gave Ledent perspective on how to balance the initiatives of multiple owners and stakeholders.

“I learned the importance of working with a diverse group of people,” Ledent said. “And as great as this honor of being named to the Crain’s list has been, I wouldn’t be where I am if it weren’t for all the great people I currently work with.”

The construction team for the Mike Ilitch School of Business project includes Christman-Brinker as the construction manager and Smith Group JJR as the architect. Ledent emphasized how working with this group of dedicated professionals ensured that the project remained on track, despite the change in management mid-project. “It has truly been an honor to be a part of this great team,” he said. “I cannot give them enough credit for all of their hard work on this project.”

Ledent will get no rest after his work is finished at the Mike Ilitch School of Business. Immediately, he will turn his attention to the $65 million Hilberry Gateway Performance Complex project, which will expand the theatre with a new lobby, jazz center, learning space and performing arts labs.

“Being one of the youngest project managers in our office, to get these two projects, it is very humbling,” Ledent said. “And the timing of it works out almost perfectly — one is going to finish while the other is starting. It keeps me in this big project mindset.”