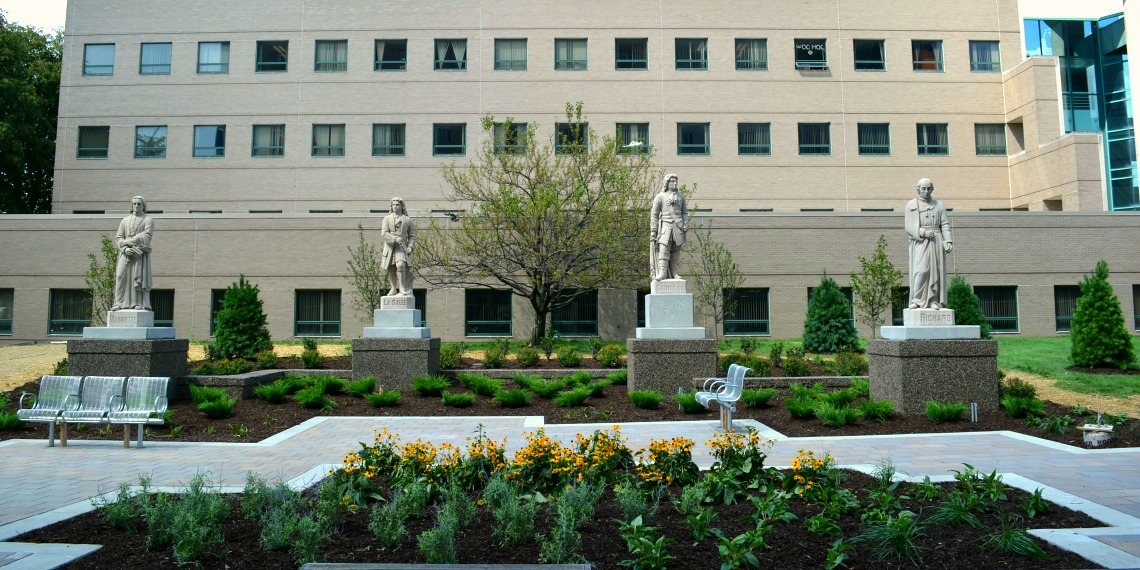 Wayne State employees in the Faculty/Administration Building (FAB) and students in the Towers Residential Suites have four new neighbors.

“They needed to relocate during construction of the new Anthony Wayne Drive Apartments because of the lay-down area and the need for the construction site to have room to build,” said Fran Ahern, interim senior director for design and construction services in the Office of Facilities Planning and Management. “And if we were going to move them, why not move them to a place where more people can see them?”

Carved in sandstone, the 10-foot figures represent the four French pioneers who helped open up the territory of Michigan and establish Detroit — city founder Cadillac, Jesuit missionary Marquette, explorer de La Salle and Richard, co-founder of the University of Michigan. Richard gave the city its motto, “Speramus meliora; resurget cineribus,” which translated into English means, “We hope for better things; it will rise from the ashes.”

Origins of the Fantastic Four

Sculpted by Julius Theodore Melchers, considered Detroit's foremost sculptor, the Fantastic Four graced the original Detroit City Hall from 1885 until the building was demolished in 1961. Saved and gifted to the university by the Detroit Common Council, they were placed on the Ludington Mall near General Lectures/St. Andrew’s Hall in 1973. Over time, the elements took their toll. In 2010, they celebrated their 125th birthday, with the Women of Wayne Alumni Association supporting their conservation. 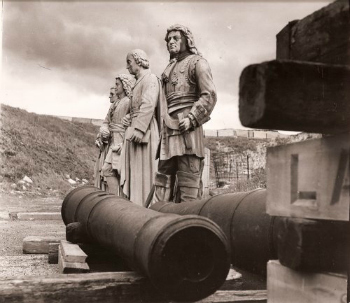 According to historicdetroit.org, Bela Hubbard, a lumber baron, real estate mogul and historian, commissioned Melchers in 1884 to carve “larger than life” sandstone statues of the four pioneers. Architect John M. Donaldson did a model for Marquette; Melchers did the other three.

Melchers emigrated from Germany to Detroit in 1855 after working on the Crystal Palace in London. Known as both a sculptor and a woodcarver, he made a partial living by carving cigar-store Indians. In Prussia, he had apprenticed with a sculptor and subsequently studied with leading academic sculptors at the Ecole des Beaux Arts in Paris.

Melchers worked in wood, plaster and stone, having a workshop for nearly 40 years, which produced architectural sculpture, church carvings, patterns for decorative castings and shop figures. He conducted classes in drawing and modeling, making a major contribution to fledgling artists in Detroit. His son, Gari, also a well-known Detroit sculptor, had a house built for his father in Indian Village, which still stands today.

When they stood near St. Andrew’s Hall, the sculptures were somewhat off the beaten path. Displayed at different heights and in an asymmetric design of pedestals, plantings and walls, the quartet were seen in the round on a five-acre, park-like informal setting adjacent to St. Andrews. One statue, however, was not like the others; Cadillac was the only one to face south toward the Detroit River. In the new FAB location, all four now face the water, a nod to the journeys that brought them to Detroit.

“They were kind of a hidden gem that not too many people knew about,” Ahern said of their former home. “We thought the FAB greenspace was another one of those pathways into campus that would be a good place to showcase them. It’s also going to be a nice place to hang out.”

After their displacement, the four were in storage and received a cleaning at building and restoration company Grunwell-Cashero Co.’s Southwest Detroit location while the university prepared their new, permanent home. Construction began July 15 and work began to ensure the statues were set to debut for the fall semester. Right on schedule, the statues were in their new home before students moved in the weekend of Aug. 25 and 26.

Rhode Island-based Gilbane Building Company is the general contractor for the Anthony Wayne Drive Apartments development, which will include 841 beds, a 7,700-square-foot Campus Health Center and 17,000 square feet of retail space. For Randy Zylstra, a project executive for Gilbane’s Michigan operations, finding the perfect home for the Fantastic Four was extra rewarding.

“This has been special because it is a focal point of the university. It’s a very highly traveled and visible area,” Zylstra said. “It means a lot to Gilbane to be able to do something like this for Wayne State and have something for everyone to view for many, many years.”