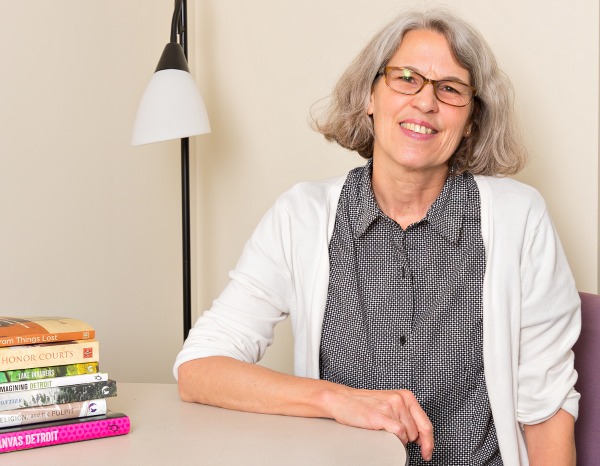 Kathryn Wildfong has been appointed to a two-year term as interim director of Wayne State University Press, effective June 19. She replaces Jane Ferreyra, who will be pursuing new opportunities following more than 14 years as director.

Wildfong, formerly the associate director and editor-in-chief at Wayne State University Press, developed the Press’s extensive list of books in regional nonfiction and Jewish studies. She has worked at the Press since 1984, beginning as a part-time copy editor and proofreader while a graduate student in the English department. She is a resident of Ferndale, Michigan.

Hired full time in 1987 as a production editor, Wildfong moved into positions of increasing responsibility — first in the manuscript editing department and then in acquisitions — and has been editor-in-chief since 2009.

She has a bachelor’s in English and a master’s in comparative literature, both from Wayne State University.

“I’ve had the very good fortune to work closely with Jane Ferreyra during her tenure at Wayne State Press, and I’m very well aware that she is a tough act to follow,” said Wildfong. “But I’m equally fortunate to be surrounded by such smart, creative and hard-working colleagues at the Press, and excited by the challenges and opportunities for growth and change that lie ahead.”

Wayne State University Press, established more than 75 years ago, publishes approximately 40 new books and 11 journals per year. The Press is a leading publisher of books about the Great Lakes, Judaica, African American studies, and a wide range of other scholarly and general interest titles.