Michigan’s University Research Corridor was responsible for $2.15 billion in research and development (R&D) spending in fiscal year 2015, an increase of 53 percent since 2007, according to the 10th Annual Economic Impact and Benchmark Report released today. The report also notes the URC contributed $16.5 billion to Michigan’s economy, an increase of $3.7 billion since 2007, the year the URC was formed and began benchmarking its impact on the state of Michigan.

“Celebrating ten years of this unique collaboration, Michigan’s leading research universities continue to advance research and are making a direct economic impact on every county in the state,” said URC Executive Director Jeff Mason. “This report demonstrates the collective power of the URC universities, which are highly competitive with the most respected clusters in the country and make a significant contribution to our state’s economy.”

Over the past decade, URC research has led to advances in medicine, mobility, business and society as a whole, and investments and advancements in research continue to grow in size, scale and impact.

The URC attracted $0.94 of every federal dollar spent on academic research in Michigan, and accounts for 94 percent of all R&D conducted at higher education institutions in the state. Nearly $500 million in new tax revenues are attributable to the URC, as well as a net jobs impact of 68,896 in the state.

“The economic impact of the URC is a critical component of Michigan’s economy,” said University of Michigan President Mark Schlissel. “The coordination and partnership between our three institutions truly make a difference. We develop innovations that improve lives and drive economic growth in communities here in Michigan, across our nation and around the globe.” 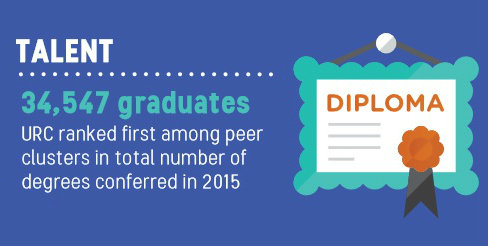 The URC also ranked first in the talent composite score, a measurement of total number of degrees conferred and total number of high-tech degrees. The URC conferred 34,547 degrees, including 2,392 medical degrees, the highest number of advanced degrees in the medicine and biological science fields of any peer university innovation cluster. In fall 2015, the URC educated more than 155,000 students from across the state (70 percent), country (17 percent) and world (13 percent).

“Our URC universities develop an important pool of talent for the state and lead the country in producing advanced degree life science graduates,” MSU President Lou Anna K. Simon said. “Our faculty members are leaders in their fields of study and attract some of the world’s brightest students and junior faculty, inspiring younger scholars to excel and preparing them to confront the world’s biggest challenges.”

Since 2002, the three URC universities have cultivated 210 start-up companies, including 79 that have formed in the past five years. Twenty-two start-ups were produced in 2015, exceeding the URC’s five-year average and surpassing annual totals in each of the previous four years. The URC also has surpassed its five-year average for the number of patents issued, licensing and options activity, and invention disclosures.

“The URC is conducting cutting-edge research that has real-world implications in the communities we serve,” said Wayne State University President M. Roy Wilson. “When the R&D happening at the URC is taken out of the lab and into the market it drives a variety of business results, creating new jobs and generating investments in our communities.”

The report found that every county in Michigan has benefitted from economic activities tied to the URC, including spending on operations, student spending and incremental alumni earnings. The report also includes a breakdown of the URC’s economic impact in 10 regions statewide, including the effect of the additional money URC alumni living in Michigan earn because of their university degrees. As of summer 2016, the URC universities had more than 1.2 million graduates worldwide. The 651,000 living in Michigan account for more than 9.5 percent of the state’s population over age 24.