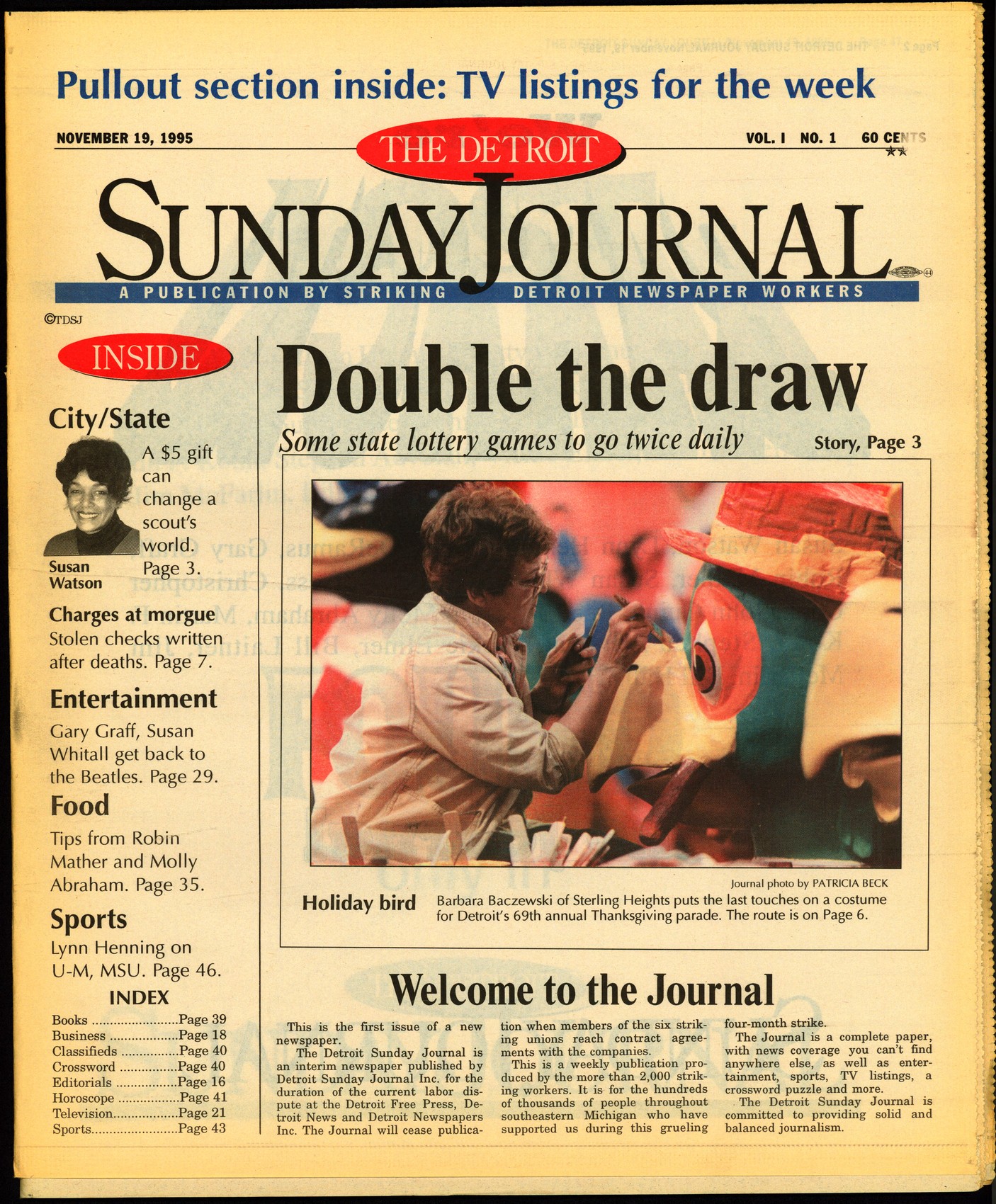 The Wayne State University Libraries recently launched a digital collection containing all issues of the Detroit Sunday Journal, the publication produced by newspaper union workers who went on strike from the Detroit News and Detroit Free Press in July 1995. Spanning four years and just over 200 editions, the Sunday Journal was a weekly tabloid newspaper that was available through the mail, in stores and at corner boxes throughout Southeast Michigan.

“It was journalism off the leash,” said Tom Schram, former publisher of the Sunday Journal. “Strike newspapers in America had been primarily stopgap publications produced by outside interests. The Sunday Journal was funded by unions. All workers received the same meager strike pay, but we were motivated, skilled professionals, unencumbered by any formal structure or hierarchy and therefore had a chance to produce an amazing, high-quality product. Some weeks we met those standards; some weeks we did not. But the goal and the effort were always there.”

The libraries digitized every issue of the Sunday Journal, from Nov. 19, 1995, to Nov. 21, 1999. Though the newspaper strike formally ended in 1997, the paper continued to run as workers were slowly rehired and ongoing disputes were settled. "The Sunday Journal is a key piece of Detroit's historical record, a counterpoint to the narrative of relentless media consolidation” said Joshua Neds-Fox, coordinator for digital publishing at Wayne State. “We’re really proud to see this newspaper digitized, available in full text, fully searchable and to know that the work of a lot of dedicated librarians, archivists and students is culminating in this vital collection.”

The Sunday Journal was one of the longest-lived strike newspapers ever and will likely be the last major one, given the diminished state of the print industry and the rise of accessible and inexpensive online journalism. Two former Sunday Journal reporters have gone on to win Pulitzer Prizes, journalism’s most prestigious award. Paige St. John won the 2011 Pulitzer Prize for Investigative Reporting at the Sarasota Herald-Tribune and Jim Schaefer won the 2009 Pulitzer Prize for Local Reporting at the Detroit Free Press.

View the collection at http://digital.library.wayne.edu/digitalcollections/item?id=wayne:collectionDSJ.

Wayne State University is a premier urban research institution offering more than 380 academic programs through 13 schools and colleges to more than 27,000 students.