The year in review: 2020’s top stories from the School of Medicine

The year 2020 doesn’t mimic any other year in the School of Medicine’s 152-year history of urban clinical and research excellence. From the COVID-19 pandemic that disrupted normal patterns of life and education, to civil unrest throughout American cities and a new health care home for Detroit and more, these are the stories of the School of Medicine in the year 2020. They represent the innovation and grit of the school’s faculty, staff and students, who continue to exhibit leadership when leaders are needed. 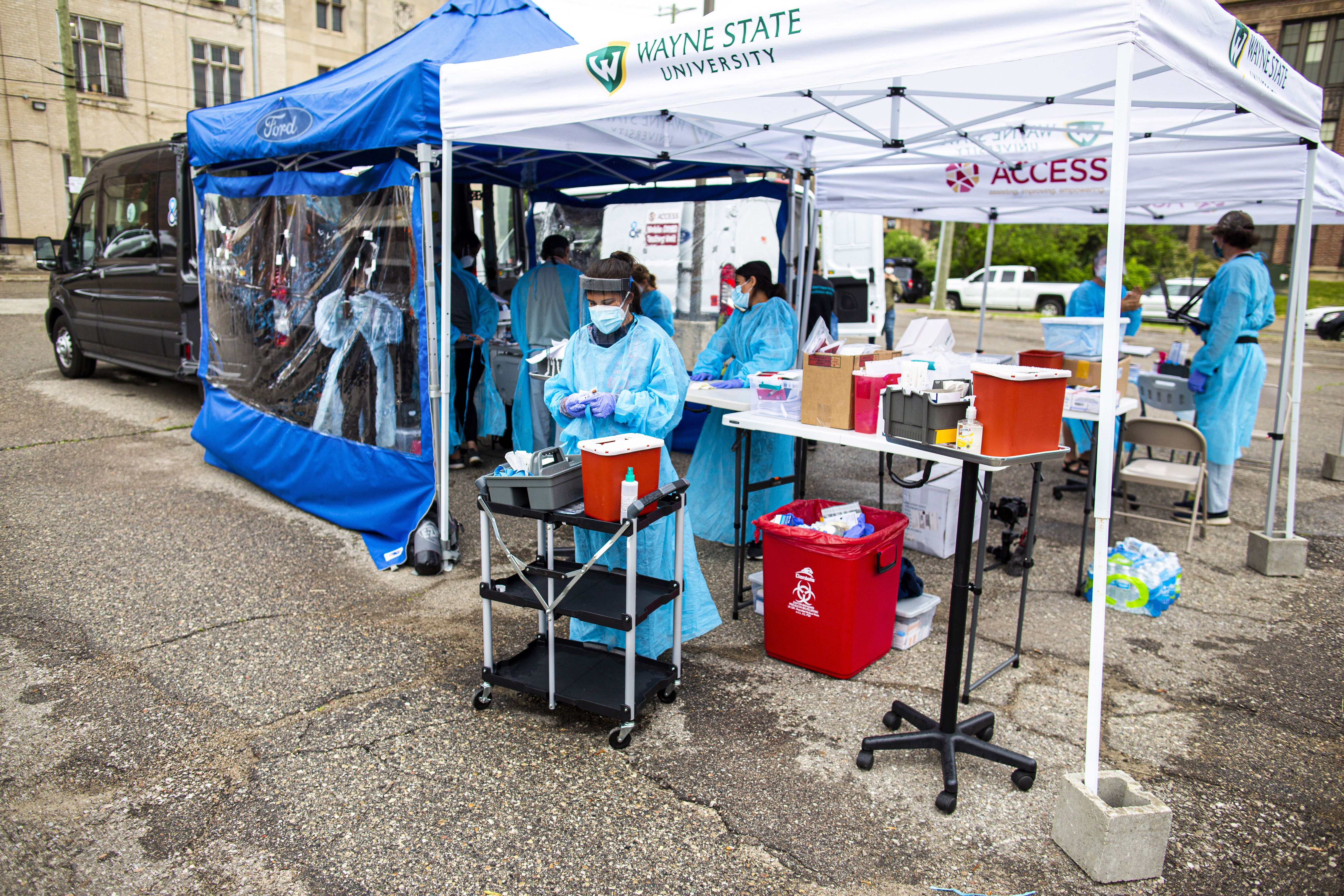 Mobilizing in the initial face of COVID-19

In March, Wayne Health faculty established the first drive-through COVID-19 testing site in Detroit, testing thousands of police officers, firefighters and health care workers, some of whom could not get tested at their own hospitals. The testing expanded to the greater community in June and went mobile. Through a coalition of Wayne Health, Wayne State University School of Medicine, ACCESS and the Ford Motor Co., the mobile testing units have visited nearly 200 locations across the state and tested more than 30,000 people. All sites offer free testing. A prescription is not required for someone to be tested. The units go to schools, churches, nursing homes and other municipal centers throughout Michigan six days a week, and started doing so at a time when testing was hard to come by. The units offer other health services as well. State officials are building upon the program now by increasing the mobile testing infrastructure from three to five vehicles with financial support from Ford and film director Steven Soderbergh, all outfitted with vaccine storage and distribution capabilities. 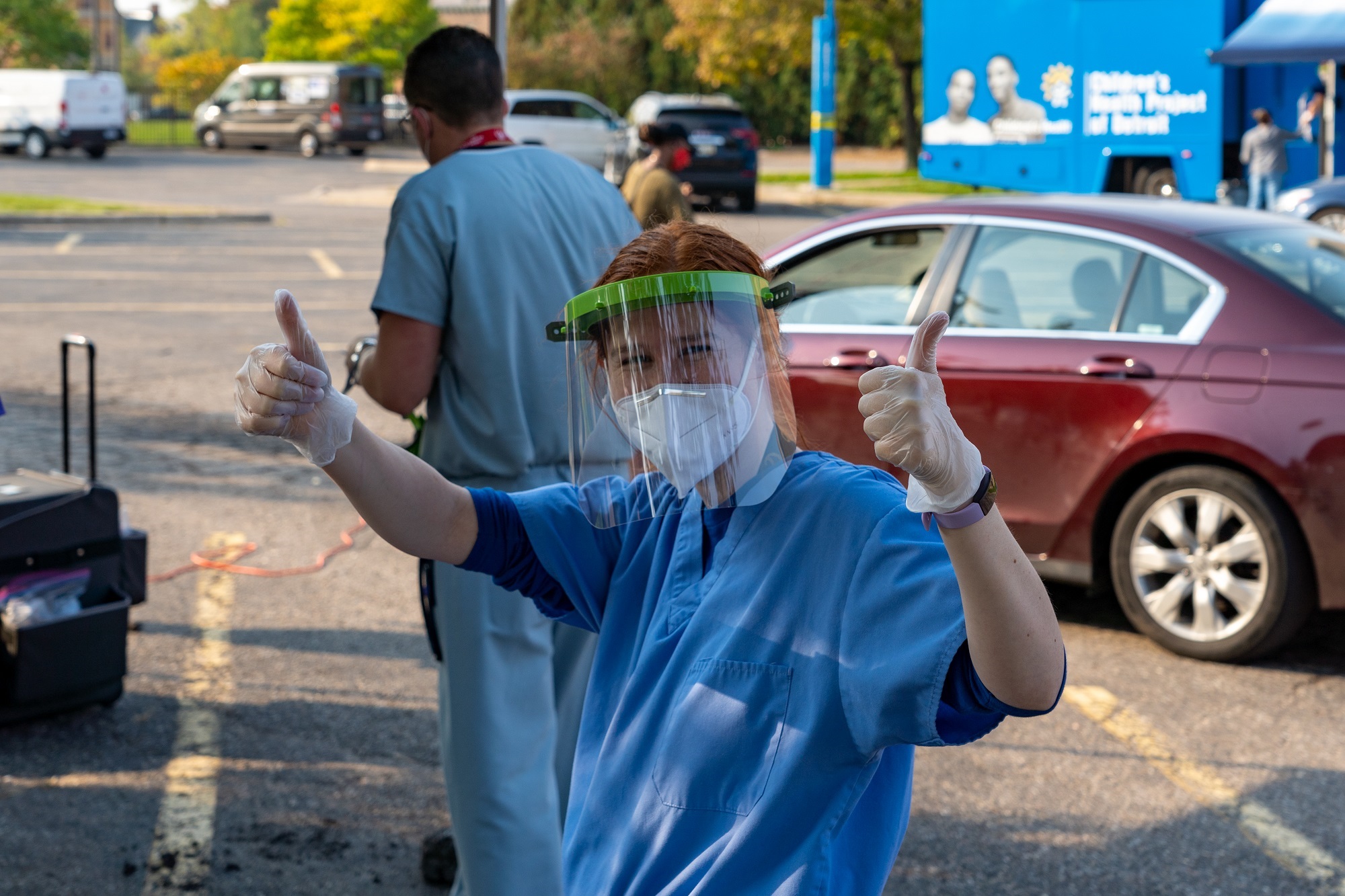 Students, faculty and staff band together to fight back

In April, during the early stages of the pandemic, students wasted little time figuring out how they could help the community, especially after the Association of American Medical Colleges paused in-person learning and clinical rotations. They collected, created and raised money to purchase personal protective equipment for Wayne’s affiliated hospitals. They provided child care and household management for frontline workers battling the virus at work. They assisted in manufacturing hand sanitizer in WSU labs – it was hard to get at the time – to donate to Detroit’s police officers.

That same month Street Medicine Detroit, a School of Medicine student-led organization, committed to serving the city’s homeless and vulnerable population by building six Field Hand-Washing Stations and placing them near soup kitchens and in homeless encampments throughout the city. The stations allow those who live on the streets to clean and sanitize their hands if they don’t have access to a sink or bathroom. Many months later, with help from several other community organizations and Professor of Medicine Teena Chopra, M.D., more than 18 of the stations, including robust portable sinks, exist in Detroit, Troy and Rochester. The stations are in neighborhoods like Nardin Park, home of Auntie Na’s Village; outside Sikh gurdwaras; and in parks. (A map of the locations is available here).

Associate Professor of Ophthalmology, Visual and Anatomical Sciences Ryan Thummel, Ph.D., and his son Eli used their own 3D printer to manufacture face shields for emergency department workers, as did medical student Rafael Ramos and others. School of Medicine faculty used existing lab supplies to put together more than 12,000 test kits for the drive-through test site later opened by the city of Detroit. And in March, Wayne Health purchased four new devices that provided rapid, on-site test processing and placed them in the Detroit Medical Center for faster results in tested patients. WSU was also involved in a number of the national vaccine testing programs, and in conjunction with Johns Hopkins is conducting outpatient clinical trials involving convalescent blood plasma from infected donors in antibody research. 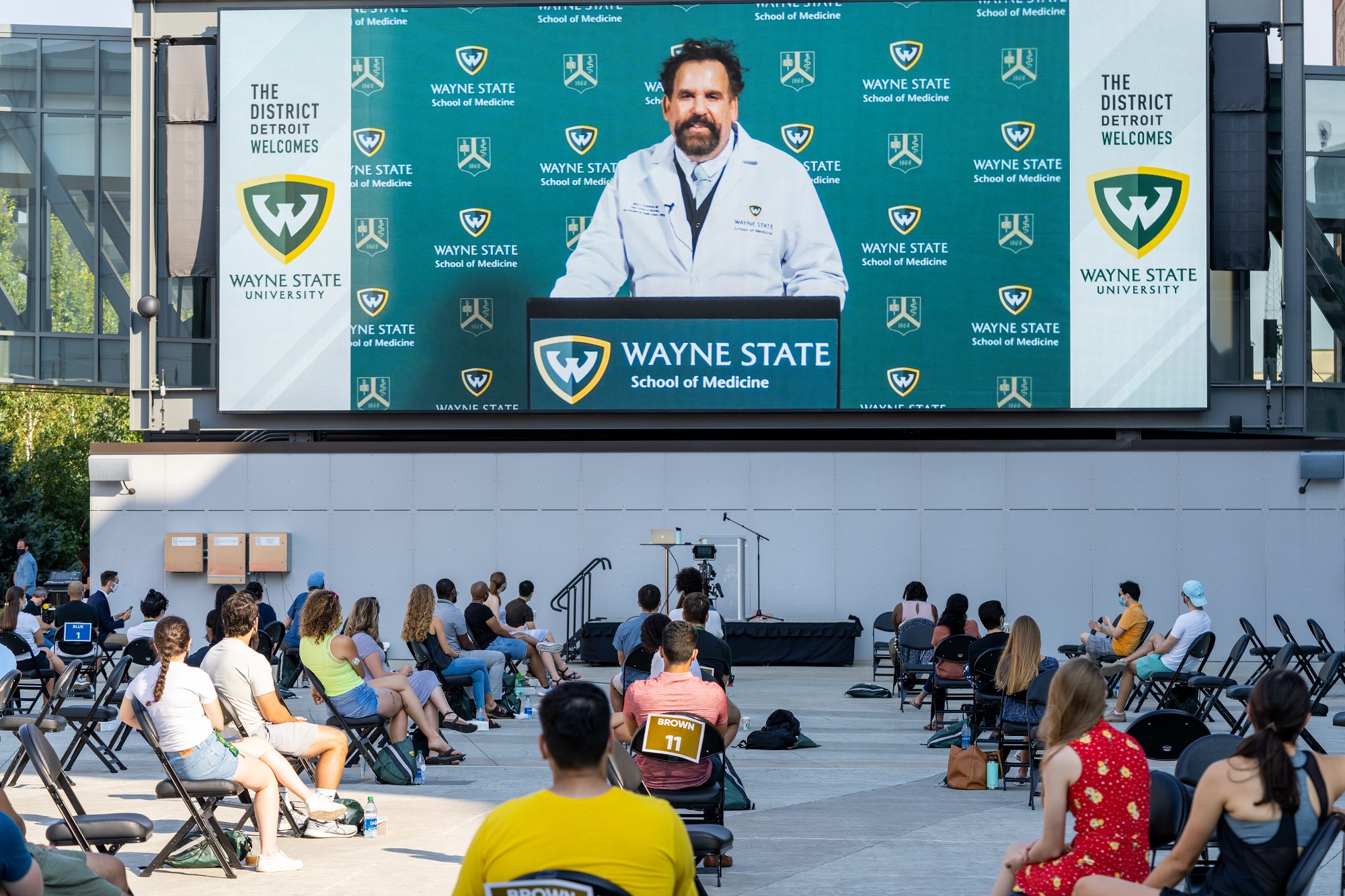 Mark Schweitzer, M.D., a preeminent radiologist from New York, was appointed dean of the Wayne State University School of Medicine and vice president of Health Affairs for the university in January. His first day in the office was April 27.

He acclimated fast, hosting virtual town halls with students, faculty and staff regularly to keep them updated on the ever-evolving situation the pandemic presented, as well as embracing the challenge of solving problems, particularly when those solutions make a difference in the community. He has already made several strides in student leadership initiatives and continues to work toward cultivating and growing philanthropy to enhance the school’s medical research portfolio. 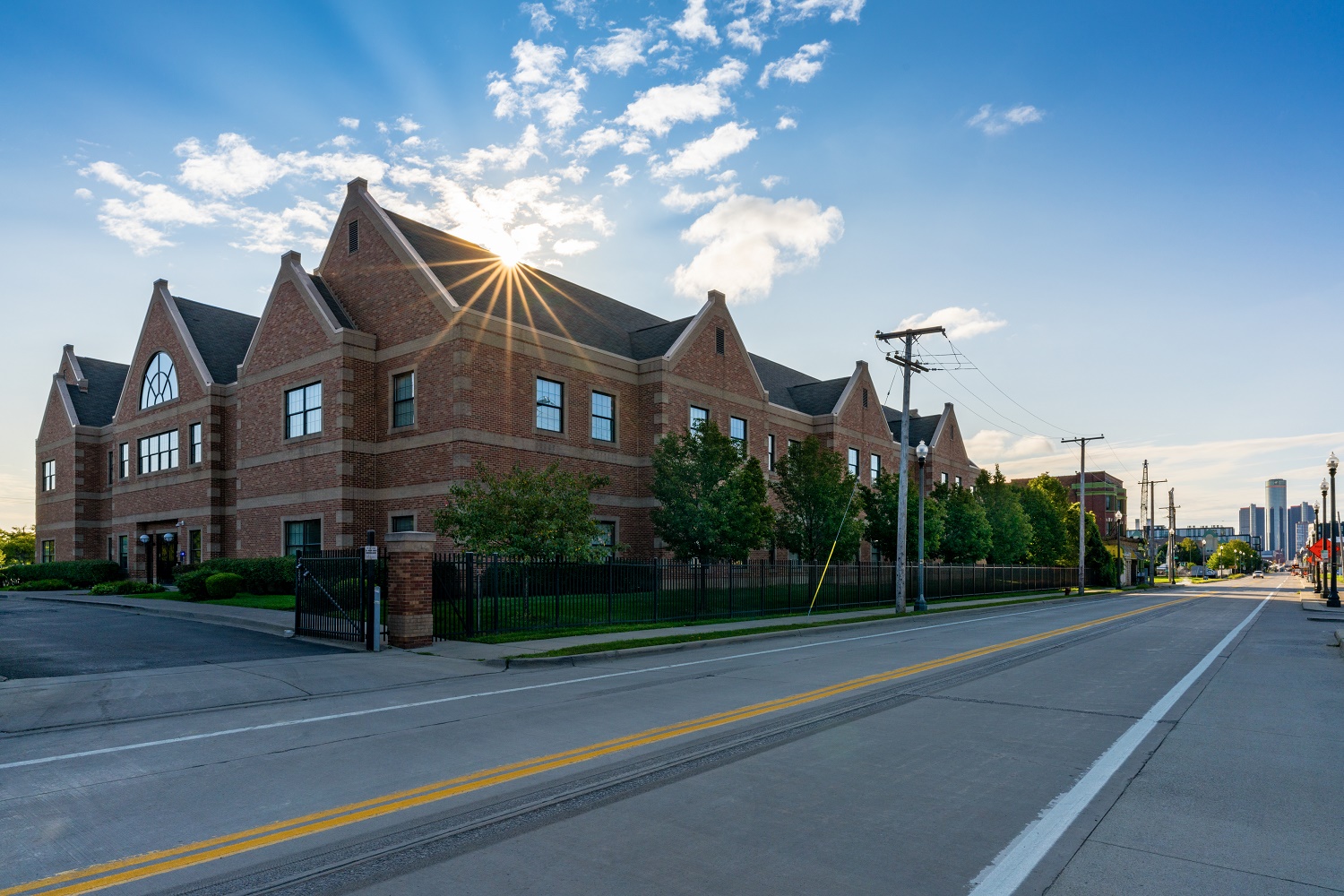 The location is also home to the new Center for Population Health Accountability, offering novel, community-based and mobile approaches to “whole-person” care, addressing physical and behavioral health needs, and facilitating access to partner programs to address social determinants of health such as poverty, housing, transportation and access to food that impact well-being. 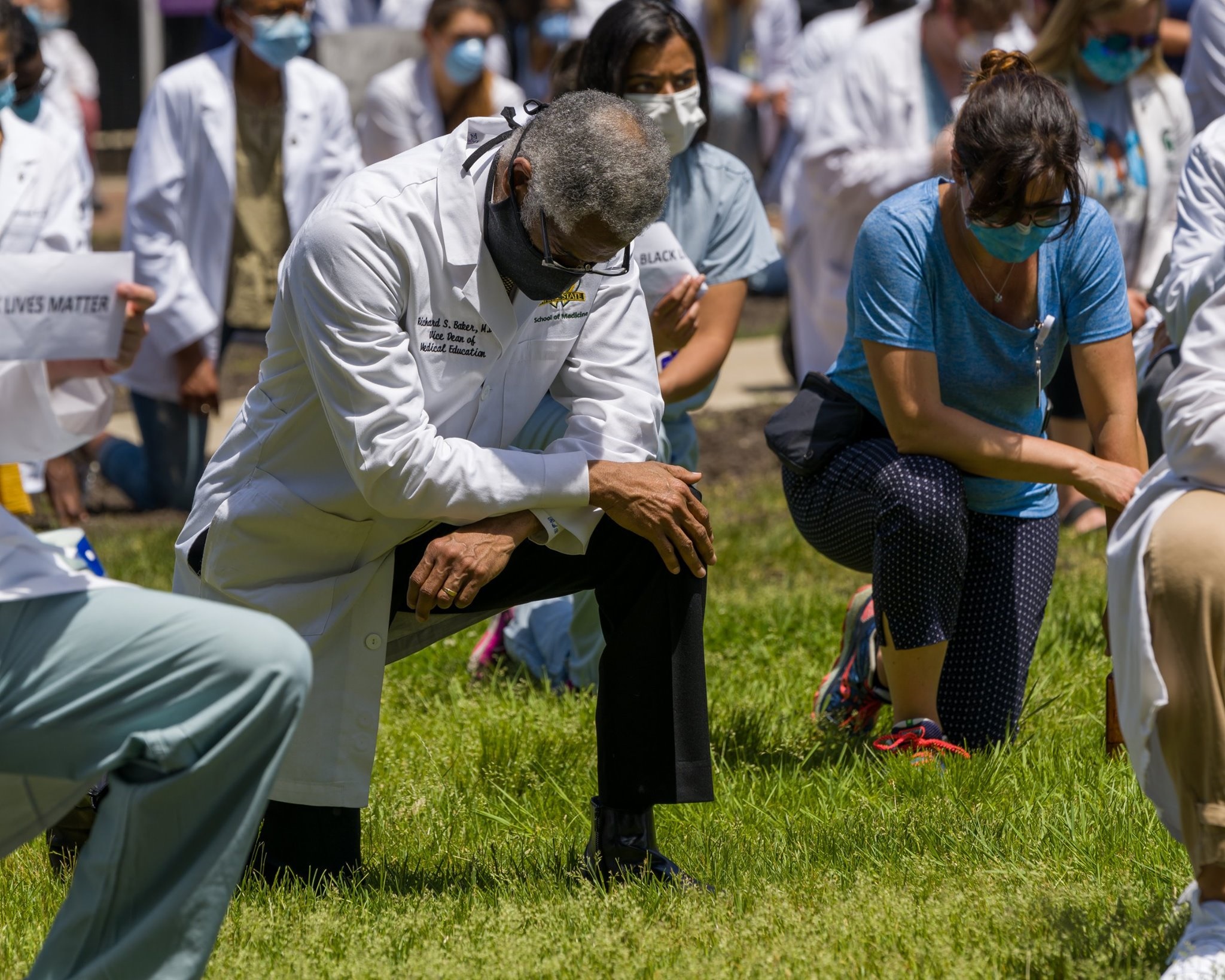 Faculty, students and staff participated in the White Coats for Black Lives first kneel-in, an initiative launched in June. Participants kneeled outdoors for 10 minutes and held a period of silent reflection regarding the public health crisis of systemic racism in the wake of the death of George Floyd, and many more before him. They joined professionals from the Barbara Ann Karmanos Cancer Institute and Detroit Medical Center. “WSU physicians not only care for their communities, they lead them. They are the catalyst that battles health disparities, many of which have their roots in systemic racism. Racism is a disease, and our vocation is to fight disease,” wrote Dean Schweitzer in a May 31 message about civil unrest. “Every life is sacred and is a thread in the pattern that is our nation. That pattern will remain torn and unrealized as long as some Americans continue to lead lives cut short – either through senseless violence or by social determinants of health that dictate higher rates of disease, a lesser quality of life, a worse education -- simply because of race or ZIP code.” 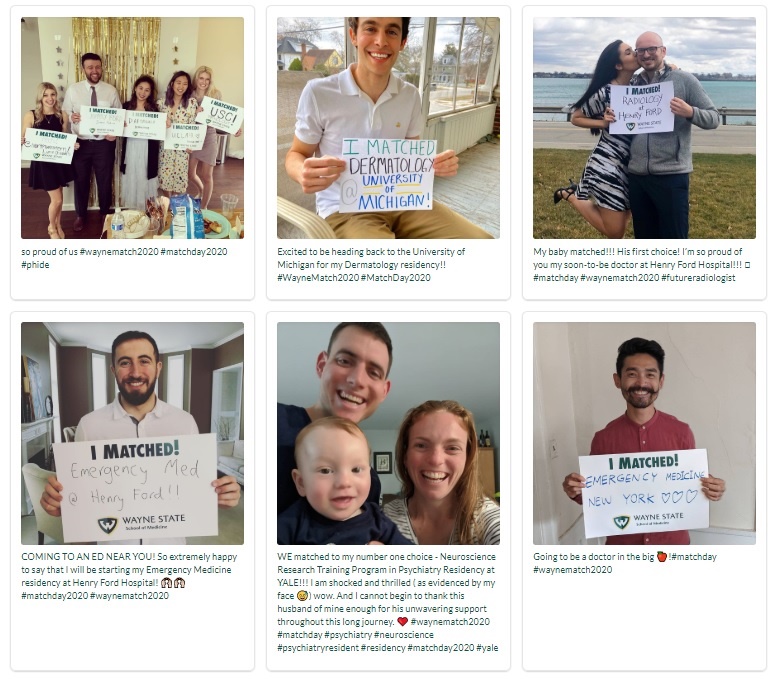 With COVID-19 case numbers rising in February, less than a month from what is arguably one of the most anticipated events in a medical student’s academic career, School of Medicine officials made the hard decision to cancel its in-person version of Match Day. Residency assignments would still need to be announced, and celebrated, as they always were. A team of leadership, administration and staff worked diligently and quickly to put together a virtual Match Day that still felt authentic, joyous and important. By May, with the pandemic showing no signs of abating, they reluctantly embraced hosting virtual versions of the School of Medicine master’s and doctoral commencements, and medical Class of 2020 commencement. They also welcomed the incoming Class of 2024 with a hybrid of in-person and online events, including a safe and socially-distanced orientation and distribution of the coveted white coat. 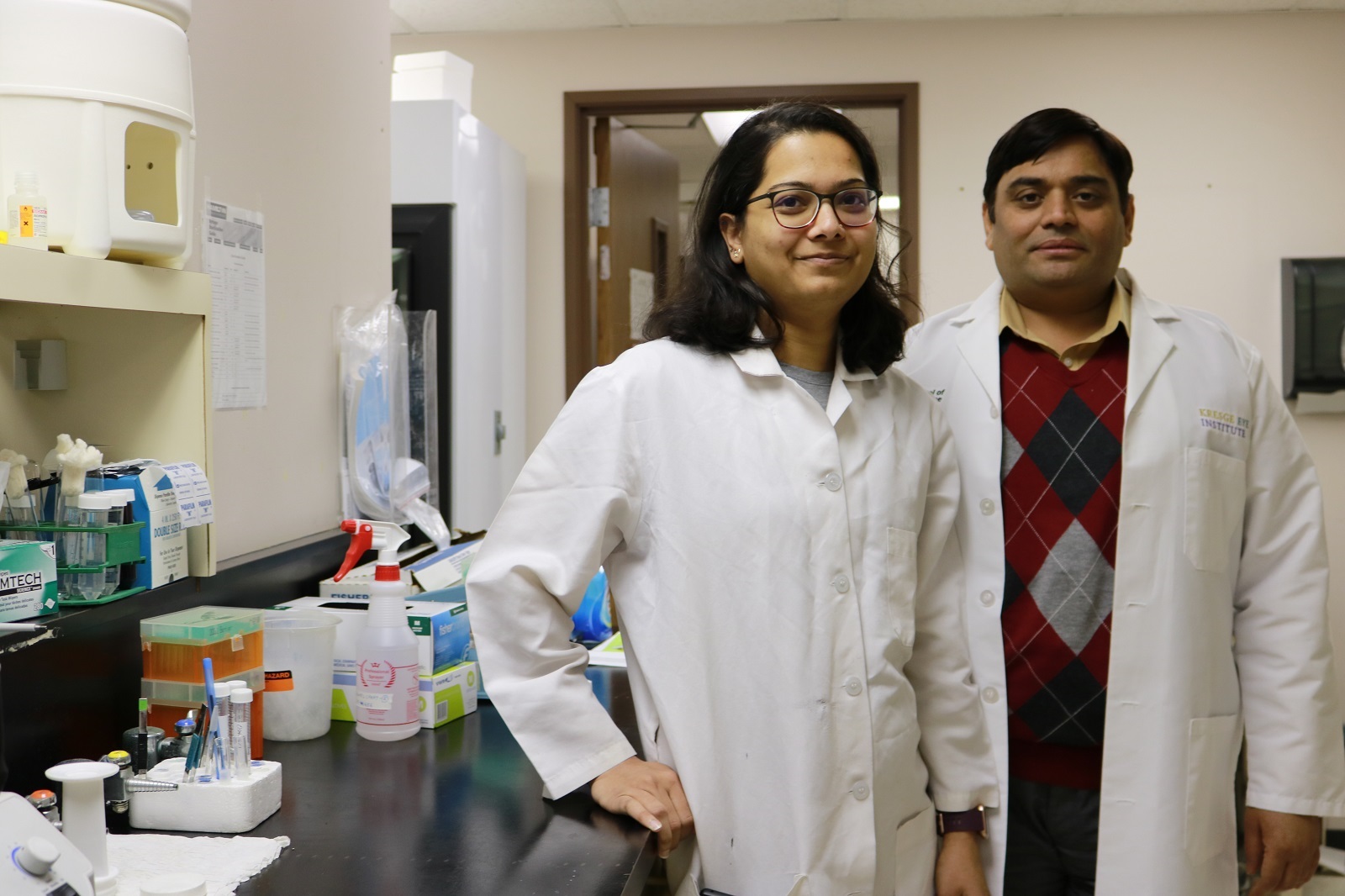 Discovering more to better the community

Researchers didn’t slow in the midst of the pandemic, with some pivoting to COVID-19 research that utilized their lab’s expertise. That included the lab of Professor of Oncology Hayley Thompson, Ph.D., the associate center director of Community Outreach and Engagement at the Barbara Ann Karmanos Cancer Institute, who launched a survey in June to ask community members about their experiences with health care during the pandemic. Questions focused on cancer prevention, screening and treatment, as well as COVID-19 concerns, social distancing and impacts on diverse communities. Results will inform practical policies and systems change to support vulnerable populations that disproportionately carry the COVID-19 burden.

A month earlier, a hospital-based infection control team led by Teena Chopra, M.D., M.P.H., a professor of Infectious Diseases and corporate medical director of Infection Prevention Hospital Epidemiology and Antibiotic Stewardship at WSU and the Detroit Medical Center, published news of a concerning trend in older, severely ill patients testing positive for COVID-19 – they also tested positive for Clostridioides difficile, sometimes called C. diff or CDI. The case of one COVID-19 patient who required three fecal transplants and later died triggered Dr. Chopra to have her team look at all COVID-19 patients treated at DMC hospitals. What they found was published in Emerging Infectious Diseases, a journal of the CDC.

In October, medical students were the catalysts for a new study inspecting the mental health of health care workers during the early stages of the pandemic in the Detroit area. Third-year students Sydney Daviskiba and Megan MacKenzie worked with faculty in the Department of Psychiatry and Behavioral Neurosciences on a survey using standardized scales for stress, anxiety, depression and post-traumatic stress disorder that asked a variety of questions about clinical experiences, and provided the opportunity for participants to give open-ended accounts of their experiences as frontline health care workers. “Rapid Assessment of Mental Health of Detroit-area Health Care Workers During the Coronavirus Disease 2019 Pandemic” was published in the Annals of Clinical Psychiatry.

In November, postdoctoral fellow Sneha Singh, Ph.D., working in the lab of Associate Professor of Ophthalmology, Visual and Anatomical Sciences Ashok Kumar, Ph.D., after an analysis of donated ocular tissue, revealed that COVID-19 patients might harbor the virus in their eyes. The finding caused alarm for eye donor organizations, leading them to screen cornea tissue before acceptance for transplant surgeries.

Applications to attend the medical doctor program hit a historical high this year. With a week left to go before this year’s admissions cycle closes, the Office of Admissions received 10,177 applications from aspiring doctors who wanted to be part of the Class of 2025. The number is the most the school has ever received in its 152-year history. To date, 1,454 interviews have been requested, 739 interviews have been completed and 252 offers have been sent to fill the 300 or so positions available. 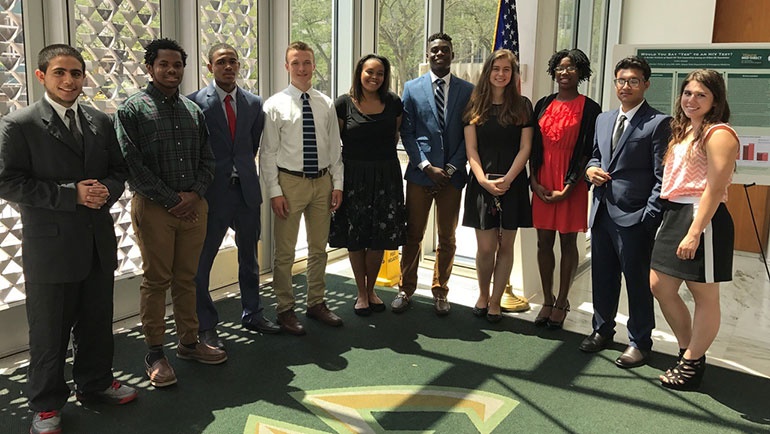 In August, the nine students who made up the first cohort to participate in Wayne Med-Direct began their first year of medical school. Med-Direct focuses on placing highly-talented, traditionally underrepresented undergraduate students at Wayne State on the academic fast track to the School of Medicine with full undergraduate and graduate scholarships.

Collectively, their success marked a milestone for the high-profile program, which WSU President M. Roy Wilson announced in 2015 and which has received significant support from noted alumni such as entrepreneur and philanthropist Mort Harris. Not only does the cohort’s passage from undergraduate programs into medical school affirm Wilson’s initial confidence in the program’s mission to foster greater diversity within the medical ranks, it also suggests bright prospects for the program moving forward.