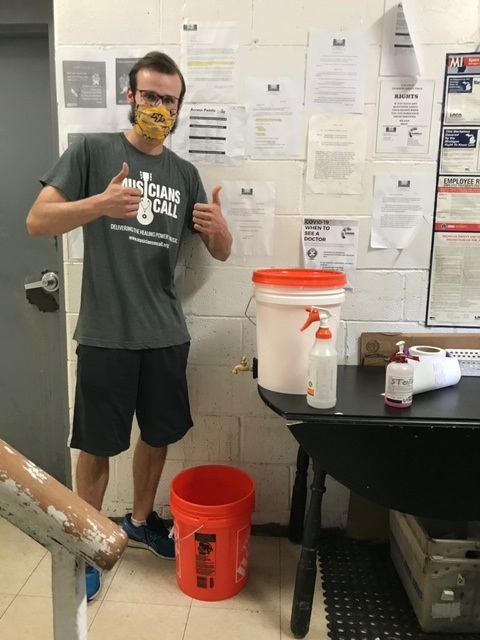 The U.S. Centers for Disease Control and Prevention lists hand-washing as one of the best ways to prevent the spread of COVID-19. Detroit was in the early stages of the pandemic in April when Street Medicine Detroit, a Wayne State University School of Medicine student-led organization, committed to serving the city’s homeless and vulnerable population by building six Field Hand-Washing Stations and placing them near soup kitchens and in homeless encampments throughout the city. The stations allow those who live on the streets to clean and sanitize their hands if they don’t have access to a sink or bathroom.

Three months later, more than 14 of these stations, including two robust portable sinks, exist in Detroit, Troy and Rochester. The stations are in neighborhoods like Nardin Park, home of Auntie Na’s Village; outside Sikh gurdwaras; and in parks. (A map of the locations is available here).

The expansion happened when several community organizations decided to focus their energy on fighting the pandemic by banding together for the greater good.

The groups – Street Medicine Detroit, The Blessing Basket, Pani and Simran Global – found a common champion in Wayne State University’s Teena Chopra, M.D., a professor of Medicine and an Infectious Diseases specialist who spent her pre-COVID free time teaching children at her daughter’s preschool and elementary school proper handwashing techniques to prevent the spread of germs.

More recently, Dr. Chopra has been on the front lines of the coronavirus pandemic, serving as the corporate medical director of Infection Prevention and Hospital Epidemiology and Antibiotic Stewardship for WSU and the Detroit Medical Center. With the title came countless interviews with local, national and even international media who wanted to know how Detroit was doing in its fight against COVID-19.

She also continued the role of faculty mentor of the Infectious Diseases Interest Group of the WSU School of Medicine, formed two years ago to attract students to the field. The specialty, she said, is vital now more than ever to population health. “We want to tell them how important this field is, and how interesting it is, and troubleshoot so many problems. I’ve never been more challenged during these times,” she said.

It is in this group that she connected with several students already involved in creating the stations, including one of the student leaders with Street Medicine Detroit.

“To see the passion in them, as a mentor? I was so inspired by the students,” Dr. Chopra said.

Since the Field Hand-Washing Stations were implemented in Detroit, SMD and DSC have continued to receive positive feedback from encampment residents, as well as requests for assistance from programs around the country interested in setting up stations of their own. Dr. Chopra has even enlisted her local Home Depot to donate supplies, which her husband and 6-year-old daughter – founder of Simran Global – used to craft several stations.

She wants to expand the project further in Michigan. For example, a WSU engineer is developing a sensor that would measure how much each station is used. Other partnerships like it are more than welcome, Dr. Chopra said.

“Anybody who is interested and passionate, I would love to expand with them,” she added.

To donate to the cause, visit warriorfunder.wayne.edu/handwashing.