Reach Out to Youth shows students they have futures in medicine 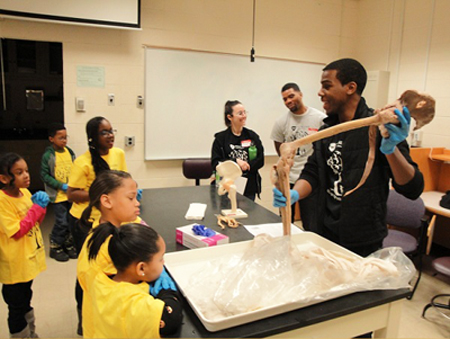 More than 100 children got a leg up on what it takes to become a doctor or medical researcher at the Wayne State University School of Medicine during the 30th annual Reach Out to Youth event.

Presented by the School of Medicine's Black Medical Association chapter Feb. 2, Reach Out to Youth seeks to introduce children ages 7 to 11 in underrepresented populations to the possibility of careers in science and medicine. The event provides children a look into the world of medicine and an understanding that they can cultivate careers in that world. Students explore medicine and science through hands-on workshops and activities presented by medical students and faculty throughout Scott Hall and the Mazurek Medical Education Commons.

"Reach Out to Youth is important because it gives children who are historically underrepresented in medicine the opportunity to be exposed to the field of health and science in a fun, educational and motivational way," said Macda Gerard, 27, a second-year medical student and co-vice president of Internal Affairs for the WSU School of Medicine's Black Medical Association. "It's important to me to volunteer because I want to be part of what sparks an interest and a love for science and medicine in the children. When they see us as medical students, whether it's through teaching them about their muscles, showing them a real human heart or conducting experiments, I want them to see themselves and to be encouraged to walk boldly in pursuit of their dreams."

The theme of this year's conference was "Hustle to Gain More Muscle." Children received an up-close exploration of how the muscular-skeletal system of the human body works by examining human shoulders and arms, and legs and knees, among other science stations. They also saw human hearts and learned how they function, from WSU medical students who volunteered for the day.

While the younger visitors explored the science of medicine, their parents attended workshops presented by School of Medicine administrators, students and physicians on preparing their children for careers in medicine, healthy lifestyles, building muscle, and obesity.

The annual program is important "because underrepresented kids need to see someone who looks like them going into the medical field," said second-year medical student Destiny Omni Kellam, 27.

Kellam, co-vice president of BAM, plans to go into Emergency Medicine. "Community outreach in the city of Detroit -- or any city with a large number of underrepresented minorities for that matter -- is very close to my heart. I am always striving to impact the youth who have a hand in tomorrow's future."

Kristina Hart, 28 also a second-year medical student, serves as the Co-curricular liaison and webmaster for BAM, agreed. She has firsthand experience with the event.

"Reach Out to Youth sparks the interest of medicine in young minds. I myself attended Reach Out to Youth when I was a young girl and today I am living my dream of becoming a physician here at Wayne State School of Medicine."

Hart plans to become a neurosurgeon. "I am a product of Detroit Public Schools. It is essential for young Detroiters to see doctors of color here at Wayne State. Representation matters, and it shows the kids that they too can become doctors."

That is the very reason WSU School of Medicine graduates Carolyn King, M.D. '93, and Donald Tynes, M.D. '95, created Reach Out to Youth while at WSU 30 years ago.

"Dr. Carolyn King and I planned the program on Wayne State University main campus the year before starting medical school," explained Dr. Tynes, chief medical officer for the Benton Harbor Health Center and the Benton Harbor Mental Health Center, and medical director of the Southwest Michigan Limb Preservation Center: Save The Leg. "We saw the shortage of African-Americans in the field of medicine, low self-esteem and lack of role models. We just thought of starting the program and getting it into the public schools. We were young and never thought further than that. We were just doing it!"

The program has expanded to a second location, Michigan State University medical schools, and Dr. Tynes and Dr. King hope to spread it further.

"We never thought it would last beyond the first event, but when it did for 10 years, I realized the need for this program was larger than me," said Dr. King, a child and adolescent psychiatrist at Pine Rest Christian Mental Health Services in Grand Rapids, Mich. "I wasn't the only little urban girl who wanted to be a doctor and needed mentoring. When this became obvious, the vision grew to create a Reach Out To Youth in every medical school on the planet."

"It's important to create more Reach Out To Youth programs because of unintentional implicit bias in the human heart and because data show individuals from impoverished communities go back to those areas and make a significant impact, said Dr. Tynes, who also serves as pastor of Keep It Real Ministry Church. "We need doctors from all the underserved communities in the world.