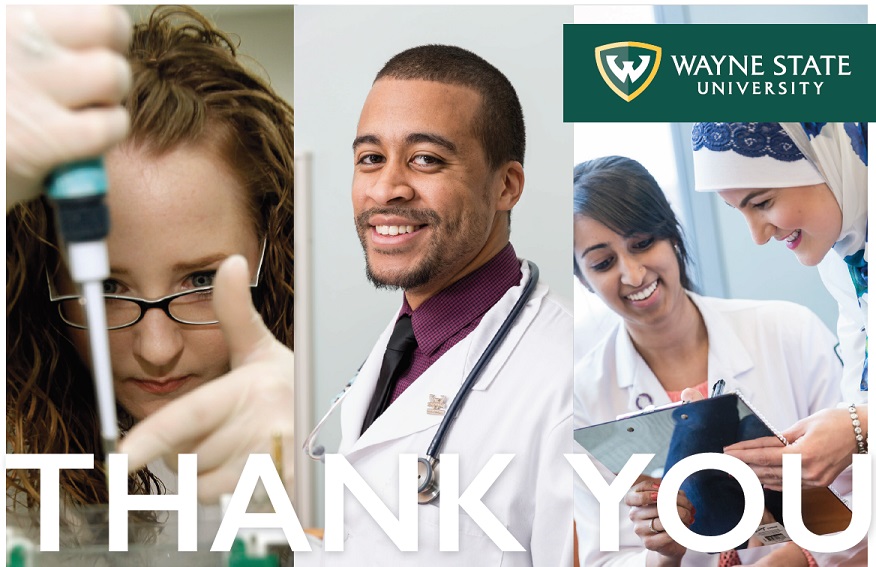 Publicly launched in 2014, the $750 million university-wide campaign was the most ambitious comprehensive fundraising effort in Wayne State's 150-year history. More than 9,000 donors combined to achieve this milestone, including nearly 5,200 alumni and another 330 current or former members of Wayne State faculty and staff.

Support for the School of Medicine during the campaign propels leadership's strategic priorities. Endowed funds for research will ensure the School of Medicine continues its legacy of discovery and innovation. Investment in the school's talented faculty and leadership means recruiting the best and the brightest to train the next generation of compassionate, patient-centered physicians and researchers. Annual and endowed scholarships will have a lasting impact on future generations of talented medical and graduate students.

The recipient of an award created during the Pivotal Moments campaign, medical student Arjune Dhanekula, said that Wayne State's culture of philanthropy has changed his perspective on the medical field. "The scholarship is a symbol of the social support we have as medical students," Dhanekula said. "It really has reminded me to be grateful of where I am in life."

Collectively, gifts of all sizes have shaped the landscape of the School of Medicine for the better. Notable gifts supporting the school include:

• Cumulative gifts of $1 million or more from more than 35 donors made up of alumni, community leaders, current and former patients, as well as corporations, foundations and organizations.

Strong leadership was instrumental in fundraising success at the School of Medicine. Outstanding volunteers, including the school's campaign committee, led by Drs. Pamela and Brooks Bock, Dean Jack D. Sobel, M.D., and his leadership team, and the Faculty Council on Philanthropy, led by David Rosenberg, M.D., chair of the Department of Psychiatry and Behavioral Neurosciences, represented a community-wide groundswell of support for the campaign.

From scholarships to research to community outreach, the generous contributions received during the Pivotal Moments campaign have meant new horizons for faculty, researchers and students alike. Exceeding this ambitious goal ensures that the School of Medicine community can continue to do what it does best: graduate a diverse group of physicians and biomedical scientists who will transform the promise of access to equal health care into a reality for all.

To learn more about how to support the School of Medicine, contact Senior Director of Major Gifts Lori Robitaille at 313-993-4070 or lrobitai@med.wayne.edu.