AAP honors Dr. Lynn Smitherman for her fight on behalf of diversity, equality and inclusion 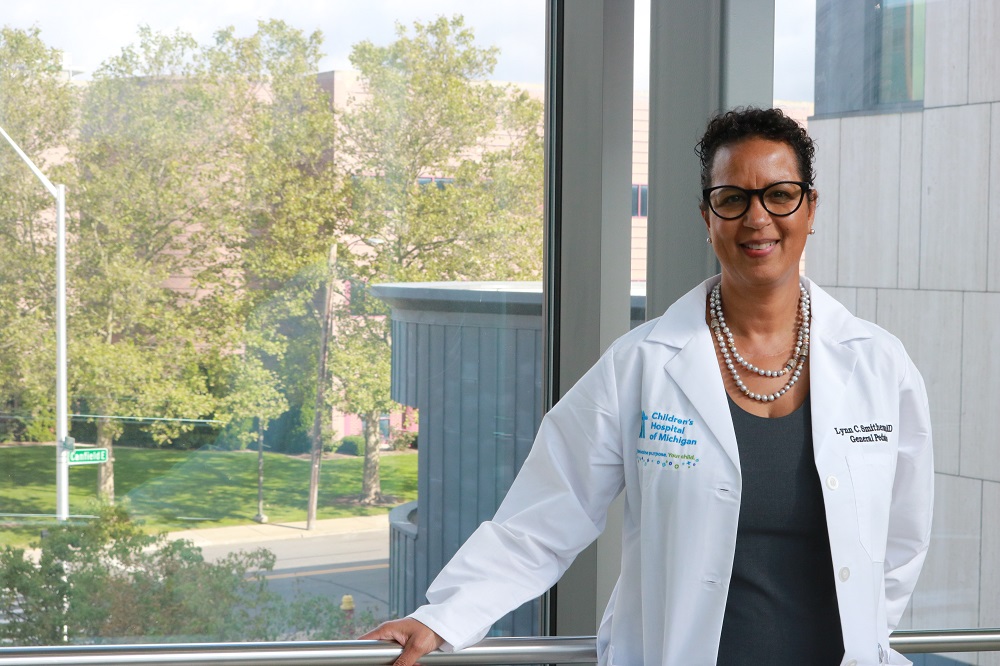 A Wayne State University School of Medicine faculty member has been recognized by the American Academy of Pediatrics for her work in raising awareness of the importance of diversity, equity and inclusion, both in medicine and in society at large.

Lynn Smitherman, M.D., associate professor of Wayne Pediatrics, received the 2020 Special Achievement Award from the Michigan chapter of the academy.

Dr. Smitherman, a member of the American Academy of Pediatrics’ Task Force Addressing Bias and Discrimination, played a critical role in developing a national policy statement that recognized for the first time the impact racism has on the health of American children and teens. The statement, “The Impact of Racism on Child and Adolescent Health,” was issued by the AAP in July 2019.

The statement is a call for action by the nation’s pediatricians to reduce the impact of racism and improve the health of American children. The AAP believes that racism has a significant impact on children’s health. The academy says that pediatricians must play a part in improving the health condition of children through listening to families, creating culturally safe medical homes and becoming advocates for social justice in their communities.

Joseph Wright, M.D., M.P.H., chair of the AAP Task Force on Addressing Bias and Discrimination, and senior vice president and chief medical officer at the University of Maryland Capital Region Health, said in 2019 that the policy statement was the first of its kind to incorporate the word “racism” in its title.

“Prejudice, discrimination, bias and racism are learned attitudes and behaviors through living in and observing a society where prejudices exist,” said Dr. Smitherman, who also serves as vice chair of Medical Education and clerkship director of Wayne Pediatrics. “Our children’s opinions about others are influenced by what the people around them think, do and say. Initially such attitudes are quite flexible. However, as children grow older such attitudes become more difficult to change. And they begin developing attitudes about various groups of people in society as early as age 3 or 4. So we must all be careful about what we do and say to and around our children. This suggests that prejudice does not come from children’s awareness of differences among people, but from their perception of negative attitudes they are taught about those differences. As a member of the AAP, I am committed to using policy, advocacy and education to encourage an inclusive society. Celebrating the diversity of our children and their families, and promoting nurturing, inclusive environments means actively opposing intolerance, bigotry, bias, discrimination and racism at every level of our society. I am appreciative of the opportunity that I have been given to work with the AAP to push this agenda forward.”

According to the AAP, a growing body of research has found that racism harms children’s mental and physical health. Children and teens who are targets of racism are impacted the most, but bystanders are also harmed. Studies have found that young adults who were bystanders to racism as a child experienced physiological and psychological effects when asked to recall the event – similar to the effects experienced by first-responders after disasters. Research has also examined the impact of racism on specific health measures, such as pre-term birth, low birth weight and mental health. The stress of being the victim of racism can cause physical reactions that can lead to long-term health problems like diabetes, heart disease and depression.

The policy that Dr. Smitherman helped develop stipulates that racism is a social determinant of health that has a profound impact on the health status of children, adolescents, emerging adults and their families, and that the failure to address racism will “continue to undermine health equity for all children.” Pediatricians, the report states, should be at the forefront of addressing racism as a core social determinant of health.
Despite some programs that have seen improvements in the health of children, the report noted, African-American, Hispanic and American Indian children continue to contend with health stressors such as comparatively higher rates of parental unemployment and significantly lower household net wealth, which are barriers to opportunities and services that optimize health.

The statement calls on pediatricians to: ensure that all patients and families are welcomed in their practices and that they will be treated with mutual respect; create “culturally-safe” medical homes in which physicians and staff are sensitive to the racism that children and families experience; assess patients for stressors and social determinants of health associated with racism; and assess patients who report experiencing racism for mental health conditions, including signs of post-traumatic stress, anxiety, grief and depression.

In terms of advocacy, pediatricians should lobby community leaders: to develop safe playgrounds and healthy food markets to reduce disparities in obesity and undernutrition; for higher quality education in segregated communities; to implement federal and local policies that lead to implicit-bias training in schools and robust training of educators in culturally-competent classroom management; to increase access to mental health resources in schools; to implement multicultural and multilingual school curriculum that are reflective of their communities; to advance social justice policies; and to advocate for fair housing practices and access to housing loans that prohibit the practice of redlining.