Their story started over slices of Detroit-style pizza, celebrating after a unit exam in their second year at the Wayne State University School of Medicine.

Doctors Mark and Georgean (Gigi) deBlois were classmates, just two of more than 200 students in the Class of 1980. “Thinking back, I remember a fair bit about med school ... . I see the huge lecture hall, the gross anatomy labs ...,” Gigi said.

“I’m fortunately not burdened with those memories,” Mark said with a laugh.

Originally from Virginia, Mark moved to Michigan after service in the military. He then worked as a mechanical engineer while completing prerequisite courses to apply to medical school. “Turns out engineering is not such a bad background for medicine, although I was older than most of the other students,” he said. 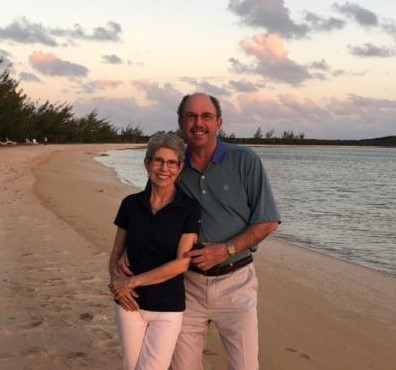 Gigi was native to Detroit. An avid reader, she originally began undergraduate studies in history and French language at Duke. After dropping out at the end of her sophomore year, she found work as a clerk typist in a hospital pharmacy. She resumed her studies a year later, transferring to Wayne State University to pursue a bachelor’s degree in Biology. This eventually led to a scholarship for her master’s program. As part of her scholarship requirements, she taught various labs, including histology, embryology and physiology. “Most of the students in these courses were pre-med. I thought, well, I’m teaching them. I ought to take the MCAT and apply to med school. My father had always encouraged me to pursue medicine.”

Both enrolled in the WSU School of Medicine in 1976, but it took another year for them to connect. “We met after a big test. Lots of second-year med students gathered at Buddy’s, and we sat next to each other,” Gigi said. They finished their senior electives in March, and married the first weekend in April.

Matching as a couple to residencies can often be difficult, but both were selected for the Medical College of Virginia, now Virginia Commonwealth University. Mark’s engineering background translated well to orthopedic surgery, while Gigi’s love of books complemented pathology. The education they received at the School of Medicine enabled them to thrive in their residencies.
“I felt extremely well-prepared. We had a solid med school education. Ultimately, we both enjoyed extremely successful careers. I transitioned from pathology to the role of chief medical officer at an HCA hospital in 2012,” Gigi said.

Mark retired in 2015, while Gigi continued working until 2017. “Other than maternity leaves for our two daughters, I never stopped working. With two incomes, both in private practice, we were able to save a substantial amount. Initially it’s a little scary to think of retirement, that you will no longer be getting a paycheck. But we realize how fortunate we are. Mark and I feel we owe Wayne State a great deal. We wanted to do something major that would make an impact for the medical school.”

To fulfill this goal, the couple established the Drs. Georgean G. deBlois and Mark E. deBlois Endowed Scholarship. Their generous $1 million gift will provide a full-tuition scholarship for students through their entire four years of medical school.

“We started med school and as I recall, tuition was $900 a semester. It was manageable. My parents paid for it, and I also worked, while Mark had the G.I. Bill. It’s really shocking and devastating to hear some of the local practices say that new physician hires are coming in with a quarter of a million dollars of educational debt. That is an enormous hole to dig out of at that point in your life when you're trying to establish a family and own a home,” Gigi said.

With this meaningful philanthropy, Mark and Gigi hope to encourage physicians-in-training as they journey through the School of Medicine and into their medical careers.

Brianna Sohl, a fourth-year medical student, detailed how scholarships have allowed her to focus on the opportunities ahead. “My experiences are not unique in how our medical alumni funding allows our students to develop leadership skills, create and sustain educational initiatives, and serve the Detroit community. The activities we are able to do now, as medical students, create the foundation of priorities that will guide us as future physicians ... . I am incredibly thankful for our medical alumni and their generous donations.”

To learn more about how to support the School of Medicine, or to establish a similar scholarship, contact Kelley Denk in the Office of Development and Alumni Affairs at kdenk@med.wayne.edu.