Two Wayne State University School of Medicine faculty members have been recognized as among the world’s top 2% of scholars in their field in a study conducted by a group of experts.

The study, “Updated science-wide author databases of standardized citation indicators,” published recently in the journal PLOS Biology, used a composite indicator based on six citation metrics to rank the scientists.

John Ioannidis, M.D., professor of Medicine, and of Epidemiology and Population Health, at Stanford University, compiled data from 1996 to 2019 in the Scopus database, the largest abstract and 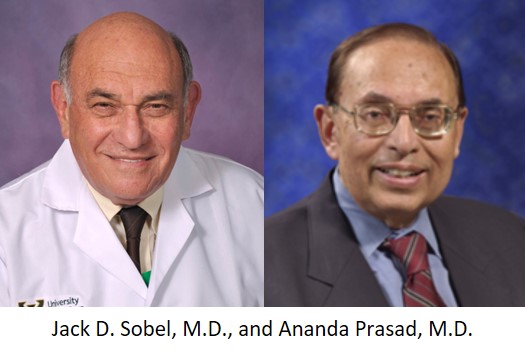 citation database of peer-reviewed literature. He then created a database of 100,000 top scientists based on information on citations, productivity and impact or h-index, co-authorship adjusted hm-index and other factors. He classified the researchers into 22 scientific fields and 176 sub-fields.

Dr. Sobel is a WSU distinguished professor and longtime faculty member of the School of Medicine, who in addition to serving as dean of the School of Medicine, was chief of the Division of Infectious Diseases and associate chair of Research for the Department of Internal Medicine. He also served as chair of Internal Medicine before he was named dean.

Also a professor of Immunology and Microbiology, and of Obstetrics and Gynecology, Dr. Sobel is one of the world’s foremost authorities on bacterial vaginosis. Widely published, he has been involved in basic science, translational and clinical research since the inception of his Infectious Diseases Research Fellowship in 1976 at the National Institutes of Health Laboratory of Clinical Investigation. He has served as a consultant for the U.S. Centers for Disease Control and Prevention’s special committee for recommending guidelines for the treatment of sexually transmitted diseases. He also served as president of the Michigan Infectious Diseases Society from 1997 to 1999, and is a member of the Infectious Diseases Society of America and its Practice Guidelines Committee.

Dr. Prasad, who joined the School of Medicine in 1963, is also a WSU distinguished professor of Internal Medicine and a pioneering researcher in the importance of zinc in the human diet. A native of India, he has made important strides researching the mineral, as well as contributing significantly to the field of hematology and sickle cell disease.

Dr. Prasad's work with zinc began when one of his former professors received an invitation from the Shah of Iran to establish a medical curriculum at the University of Shiraz Medical School and invited Dr. Prasad to accompany him. Two weeks after his arrival, a 21-year-old man who looked like an 8-year-old boy came to Dr. Prasad. The patient lacked secondary male characteristics, was considered mentally lethargic and ate clay. Dr. Prasad diagnosed the man's condition as extreme anemia, but couldn't understand how such a condition came about because most males do not develop anemia without bleeding. The condition was so prevalent in Iran that it was considered epidemic. Dr. Prasad studied the condition and hypothesized that because plants do not grow without sufficient zinc, perhaps people do not either.

In 1961, Dr. Prasad published an article in the American Journal of Medicine suggesting for the first time that zinc deficiency could account for human growth retardation. In a subsequent paper based on studies done in similar patients from Egypt, Dr. Prasad established that the study subjects suffered zinc deficiency. That study, published in The Journal of Laboratory and Clinical Medicine in 1963, was republished in 1990 as a landmark article by the same journal.

After the publication of these papers, Dr. Prasad started administering zinc through clinical trials, and his subjects began growing taller and developing male characteristics. In 1975, he suggested the National Research Council set the Recommended Daily Allowance for zinc at 15 milligrams per day.

His zinc studies have saved countless lives in African and Asian countries, including India, Pakistan and Bangladesh. In these areas, the mortality rate from infantile diarrhea approached 85 percent. When the United Nations Educational, Scientific and Cultural Organization adopted zinc supplements to combat infant diarrhea in these regions, that mortality rate dropped to 15 percent.

In December 2009, TIME magazine named zinc the “miracle mineral,” and in 2011, Dr. Prasad received a congressional commendation for his lifelong studies involving zinc.