Two Wayne State University School of Medicine oncology researchers have published a comprehensive review of their clinical research on nuclear protein transport pathways and the development of a small molecule inhibitor recently approved as an anti-cancer drug.

Ramzi Mohammad, Ph.D., and Asfar Azmi, Ph.D., both professors of Oncology, published “The nuclear export protein XPO1 - from biology to targeted therapy” in Nature Reviews Clinical Oncology. Drs. Mohammad and Azmi, with co-author Hafiz Uddin, Ph.D., a postdoctoral fellow in the Department of Oncology, detail the work of the team during more than a decade in researching the pre-clinical development of nuclear transport inhibitors. Their work was critical in developing Selinexor, sold under the brand name XPOVIO, a drug now approved by the U.S. Food and Drug Administration for the treatment of cancer patients with relapsed or refractory multiple myeloma and non-Hodgkin’s lymphoma. The Barbara Ann Karmanos Cancer Institute, where Dr. Mohammad serves as a member of the Molecular Therapeutics Research Program, and Dr. Azmi serves as co-leader of the Tumor Biology and Microenvironment Research Program, was a site for the study.

The article details the crucial role Exportin 1, or XPO1, plays in maintaining cellular homeostasis, and how dysregulation of the protein plays a pivotal role in the development of solid and hematological malignancies. Exportin 1 also is associated with resistance to several standard-of-care therapies, including chemotherapies and targeted therapies, making it an attractive target of 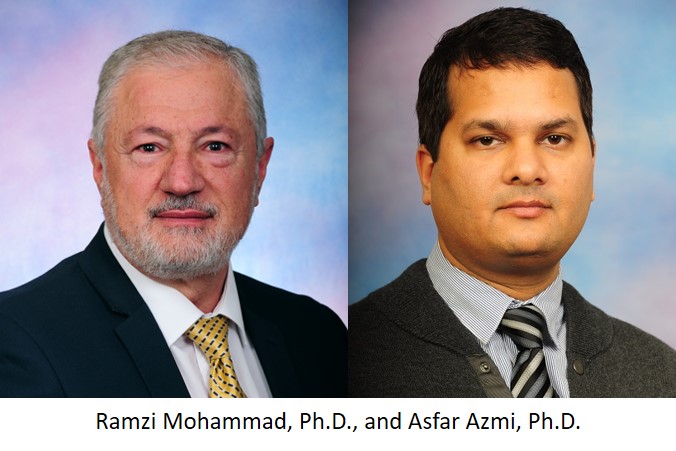 novel cancer therapies. While a number of selective inhibitors of nuclear export have been developed, only Selinexor has been clinically validated.

Selinexor works by binding to Exportin 1 and blocking the transport of proteins involved in cancer cell growth from the cell nucleus, arresting the cell cycle and leading to cancer cell death. The drug is now being developed further under the Cooperative Research and Development Agreement with the National Cancer Institute’s Cancer Therapy Evaluation Program.

“Protein movement within cells is important for their normal function,” Dr. Mohammad said. “Such movement is guided by specialized carrier proteins or transporters. Exportin 1, or XPO1, is the major exporter of nuclear proteins. In cancer, XPO1 becomes hyperactive and displaces the tumor suppressors to the incorrect compartment, thereby inactivating their function. XPOVIO is a drug that blocks such transport and retains the tumor suppressors in the correct cellular compartment, allowing them to control tumor growth.”

“This is a joint effort beginning from our basic science group, which was supported by collaborative pharma partner Karyopharm Therapeutics Inc., as well as clinical investigators at Karmanos who collectively helped move a concept from the lab to FDA approval,” Dr. Azmi said. “We continue to find ways to improve the efficacy of this drug through the discovery of novel combinations. There is a need to identify prognostic and therapeutic biomarkers that could guide a more tailored XPOVIO therapy and is currently being intensively investigated by our group.”