A research team led by Francesca Luca, Ph.D., and Roger Pique-Regi, Ph.D., both associate professors of the Wayne State University Center for Molecular Medicine and Genetics, and of the Department of Obstetrics and Gynecology, has published a study that annotated environmental components that can increase or decrease disease risk through changes in gene expression in 43 genes that could exacerbate or buffer the genetic risk for cardiovascular disease.

The results of the study, whose first authors are Anthony Findley, an M.D./Ph.D. student, and Allison Richards, Ph.D., a research scientist, highlight the importance of evaluating genetic risk in the context of gene-environment interactions to improve precision medicine. 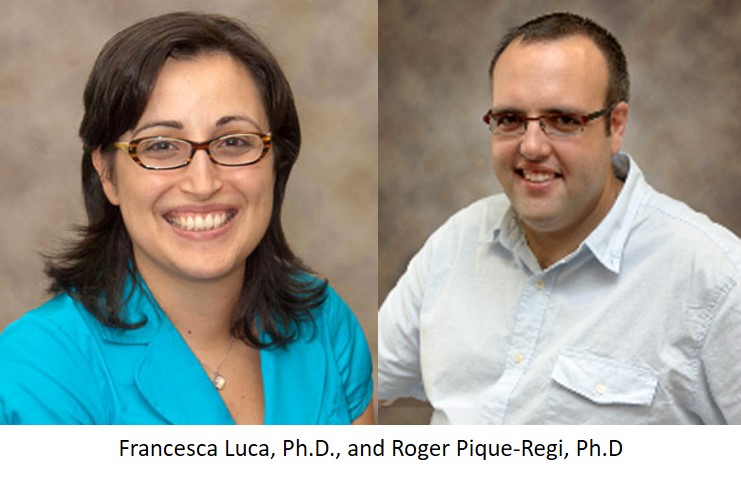 Interpreting Coronary Artery Disease Risk Through Gene–Environment Interactions in Gene Regulation was published in Genetics, the journal of the Genetics Society of America.

The study, said Dr. Luca, “illustrates that  combining genome-wide molecular data with large-scale population-based studies is a powerful approach to investigate how genes and the environment interact to influence risk of cardiovascular disease.”

By identifying regions of DNA important for endothelial cell response to different common environmental exposures, the researchers discovered that caffeine can influence the risk of cardiovascular disease. The study demonstrates the potentially beneficial and/or detrimental effects of certain environmental exposures on the cardiovascular disease risk differ depending on individual DNA sequence.

The study focused on cardiovascular disease, the research team said, because it is the leading cause of death, both in the United States and worldwide. Also, the disease is highly multifactorial, with large contributions from both environmental and genetic risk factors. “By treating endothelial cells under a controlled environment, we can discover how these genetic and environmental risk factors influence each other at the molecular level,” she said. “Our lab has developed expertise in cardiovascular research, with additional projects using endothelial cells to develop new assays to test the regulatory activity of genetic variants. The approach outlined in this paper can be applied to many different diseases; for example, our lab has also focused on how bacteria in the human gut affect gene expression in the colon, and also on the effect of psychosocial stress on asthma.”

While the work identified regions of the genome important for how endothelial cells respond to the environment and can influence the risk of cardiovascular disease, the researchers do not yet know exactly which genetic variants are directly responsible. A former graduate student, Cynthia Kalita, developed an assay to test thousands of genetic variants for gene regulatory activity. The researchers can test the variants discovered in their study using that assay to validate and explore the mechanisms by which they exert their effects, Dr. Luca said. They also are developing computational/statistical methods that can yield better personalized risk scores.

“We have extended our approach to study cardiomyocytes, which are the muscle cells of the heart. Healthy heart tissue is difficult to obtain, so we have collaborated with researchers at the University of Chicago to derive cardiomyocytes from stem cells,” Dr. Luca said. “This will allow us to shift our focus from the vasculature to the heart itself, where we can study diseases like cardiomyopathies and arrhythmias.”

As the cost of DNA sequencing continues to decrease, the research team expects that genetic testing will play a greater role in preventive health care. “To fully realize the potential of precision medicine, we need to consider both genetic and environmental risk factors of disease, and how they interact. While there are already direct-to-consumer tests that prescribe an individualized diet based on DNA, these products currently offer no demonstrated clinical value. However, with very large numbers of individuals for whom we have both DNA sequencing and information on diet and lifestyle, we may one day be able to offer better recommendations.”