The Male Contraceptive Initiative, a private non-profit foundation, announced a grant to two professors at the Wayne State University School of Medicine to support research and development of male contraceptive methods.

Zhibing Zhang, Ph.D., associate professor of Physiology and of Obstetrics and Gynecology, and James Granneman, Ph.D., professor of  Molecular Medicine and Genetics, and of Internal Medicine, will receive $150,000 to aid in their work toward developing a novel form of male contraception. 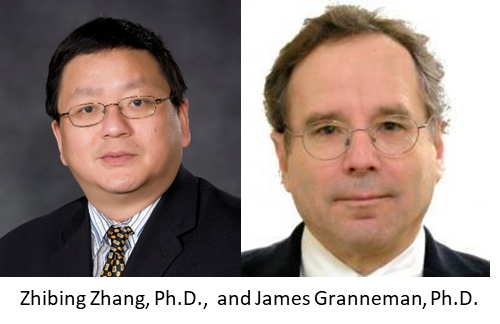 Their project focuses on targeting the interaction of MEIG1 and PACRG, two proteins required for sperm to be fully functional.

“MEIG1 and PACRG are present only in male germ cells and their interaction is essential for cargo transport to build functional sperm,” Dr. Zhang said. “We found that genetic alteration of a single amino acid in MEIG1 disrupts the MEIG1/PACRG interaction and results in complete male infertility. Based on this genetic validation, we are developing a robust screen for compounds that disrupt the MEIG1/PACRG interaction. We anticipate that lead compounds can be developed into be safe, effective and reversible male contraceptives.”

The collaborative project highlights the need for teamwork in the male contraceptive field by combining resources from the fields of reproductive biology as well as high-throughput compound screening, focusing on the downstream impact of potential drugs.

“More and more men are expressing the desire to participate in contraception with their partners. We are confident that the time is right to emphatically get behind the talent and energy in the field to achieve a real vision for a contraceptive future,” said MCI Executive Director Heather Vahdat.