James Collins, M.D., former director of Medical Student Education and assistant dean of Admissions for the Wayne State University School of Medicine, has died. He was 93.

Dean Jack D. Sobel, M.D., who announced the death of Dr. Collins, said he was “was integral to the profession of 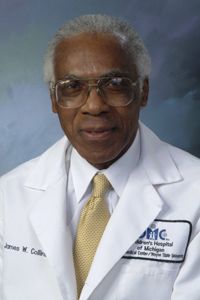 Pediatrics and a powerhouse for social justice in Detroit and in medicine."

A 1949 graduate of Wayne State University, Dr. Collins, along with three other African American physicians, were appointed to the staff of Harper Hospital, finally integrating the hospital staff of the Detroit Medical Center in 1960.

Dr. Collins received the School of Medicine’s 2018 Trailblazer Award, which recognizes alumni and faculty who, through their perseverance and dedication, have forged paths through previously unexplored territory to become pioneers in their field of medicine and medical research. A charter member of the WSU School of Medicine Academy of Scholars, he also was a member of the school’s Minority Recruitment Committee to address the lack of African American students.

After receiving his medical degree in 1953 from the University of Michigan, Dr. Collins completed an internship at St. Lawrence Hospital in Lansing and a residency in Pediatrics at Children’s Hospital of Michigan, the second African American resident to enter the program. He originally was denied practice privileges because of his race, but he fought and eventually gained privileges. He remained an active member of Children’s Hospital of Michigan and the Wayne State University School of Medicine faculty until his retirement in 2017.

He earned many accolades for his work to enhance social justice in medicine, including the State of Michigan Special Tribute and Recognition Award for Exemplary Leadership in the Field of Medicine, the Teacher of the Year Award and the Faculty Award from the Wayne State University Black Medical Association.

“If you did not know Dr. Collins, or even know of him, you would benefit from learning of his personal achievements and his work on behalf of others,” Dean Sobel said. “We have lost another of our pioneering giants. I know that you will join me in mourning the passing of this dear and great man.”