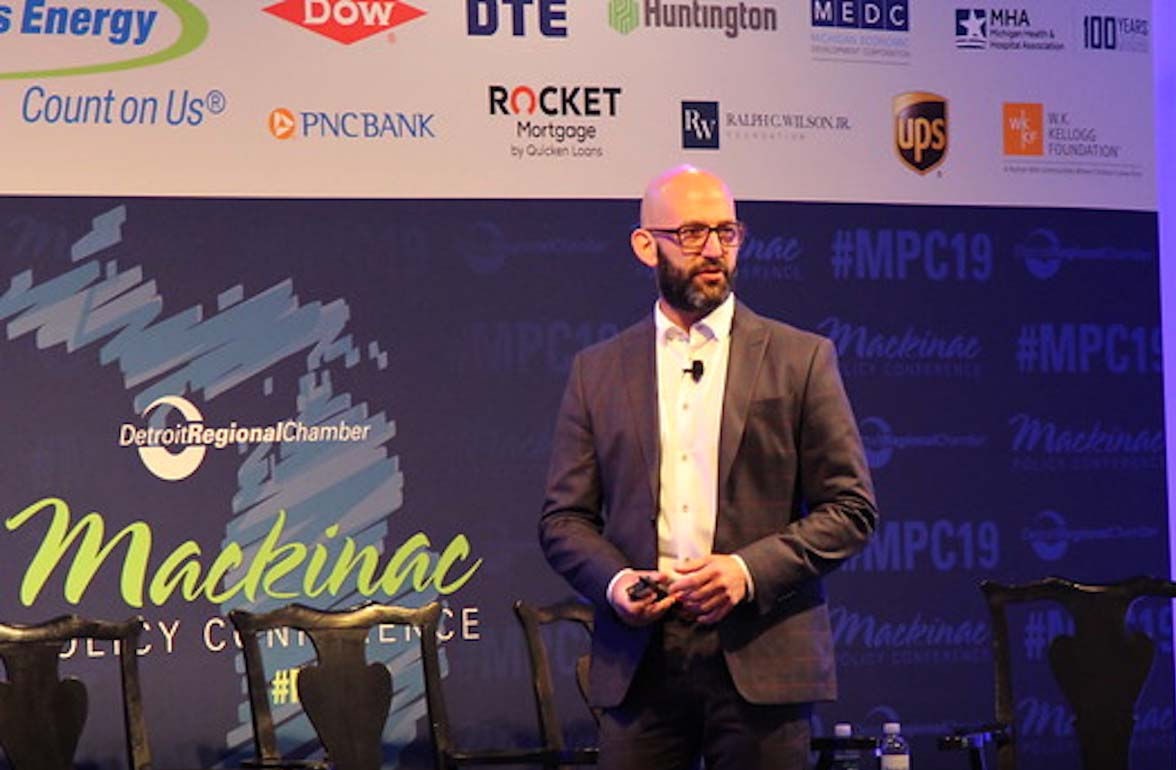 If you live in southeast Michigan, your ZIP code may determine how long you live.

Live in the 48236 ZIP of Grosse Pointe and at birth you can expect to live to an average of 82 years. Just a few short miles away, however, if you’re born and live in the Detroit ZIP of 48201, you can shave 13 years off that respectable mark.

The 13-year loss can be attributed to numerous factors, including a lack of access to healthy food, health care and safe places to exercise. Resource limitations and socioeconomic disparities in the 48201 ZIP code also contribute to soaring levels of toxic stress and poor health. That stress often manifests in the form of disproportionate levels of high blood pressure, which, if uncontrolled, brings on a host of illness guaranteed to shorten lifespan.

The good news, as attendees of the Detroit Regional Chamber’s annual Mackinac Policy Conference heard Thursday morning, is that a radically new form of mapping health data by census tract may give policymakers, researchers and health care providers the information they need to design targeted efforts to improve health in areas with a long history of worse outcomes.

The goal, said Phillip Levy, M.D., M.P.H., assistant vice president of Translational Science and Clinical Research Innovation for Wayne State University, is to develop a precision approach to population health, guided by data provided by drilling down as far as possible, perhaps even to individual neighborhoods. Such data can provide policymakers with information to laser-focus efforts for substantial impact where the need is greatest.

Known as PHOENIX, the Population Health OutcomEs aNd Information EXchange, this novel geocoded map will be housed at Wayne State University using de-identified electronic health records in combination with information on population level social determinants to paint an overall picture of health in Michigan area by area, using color-coding to graphically display differences. Working with the Detroit Health Department and the Wayne County Department of Health, Veterans and Community Wellness, Dr. Levy and his team have already begun to explore how PHOENIX can change the health of communities.

PHOENIX is the first interactive, shared database of its kind, providing the ability to visualize disease-specific hotspots with detail to the neighborhood level while also enabling identification of contributing risk-enhancing factors, projection of health benefits that result from targeted interventions and longitudinal tracking of health outcomes over time, Dr. Levy said. Such insight is key to improving the health and wellbeing of residents across Michigan — and especially in the city of Detroit, he said. The payoff for using the data to identify areas of greatest need, and then addressing that need, he said, extends beyond the targeted area.
“When you look at data like this, it’s not enough to ask ‘Why,’ you have to ask ‘How can we not work on this?’” said Levy, who is also a practicing emergency room physician. He added that reducing blood pressure in the population of Detroit by as little as one or two points overall would start to close the health disparity gap.

“Staying healthy allows people to be vibrant contributors, to family, providing emotional and physical support, and to the tax base, which helps schools and community services, bettering the overall quality of life, and prospects for the future," Dr. Levy said. "A healthier population also decreases dependence on health care systems, reducing the amount of money and time spent on medical care, enabling direction of such resources to other community needs."

In preparation for PHOENIX, in late 2016 Dr. Levy started tracking blood pressure data from every patient entering Detroit Medical Center and Henry Ford Health System emergency rooms. In just more than two years, he and his team compiled blood pressure data, cleaned of personal information and tracked by location, for more than 550,000 emergency room visits. Information such as age, employment and other socioeconomic factors were then layered on top.

PHOENIX is envisioned as key component of a broader initiative. Dr. Levy said, that includes a revolutionary approach to community engagement: giving community members information and letting them drive the process.

“We're looking at a completely different vision: fully integrating a community and university to solve health care disparities and inequities,” he said. “We will have all oars rowing in the same direction. This includes our partner health care systems, the city of Detroit and the state of Michigan, with whom we are now collaborating on a number of initiatives. In short order, Wayne State will be the go-to source for appraisal of and solutions to regional population health issues.”

PHOENIX is only the latest component of Wayne State’s Precision Population Health initiatives and ongoing efforts to combat health disparities. Whereas public health historically has been focused on disease, Precision Population Health considers the environments in which people live — whether they have access to healthy food, transportation, schools and workforce training, for instance.

In other words, said Dr. Levy, Precision Population Health is about unraveling the DNA of a community.

“It’s about delivering the right intervention to the right people at the right time, and each step is vital,” said Tim Lawther, deputy director for the Detroit Health Department, who participated as  a panelist in the Mackinac Policy Conference session. “We have to understand that the choices folks make (related to health) are determined by choices they have in their communities.”

“A lot of data exists but it’s in vacuums,” said Kim Trent, chair of the Board of Governors for Wayne State University, who introduced the presentation and panel discussion about PHOENIX and population health.

Canady said population health efforts underway at Wayne State are not just about acquiring data but understanding the story that needs to be told about the data. That story, she said, is about creating a culture of health nationwide.

“We are not aspiring to good health. You get people young and you do it as part of the education system,” Appel said. “A lot of this conference is dedicated to talent and workforce, but if we have a workforce that at age 30 is already suffering hypertension, we will never have what we need as far as vibrancy of community. Employment policy is health policy. We need people who are healthy enough to live, work and play. We are losing that. The data will help us see where those losses are.”