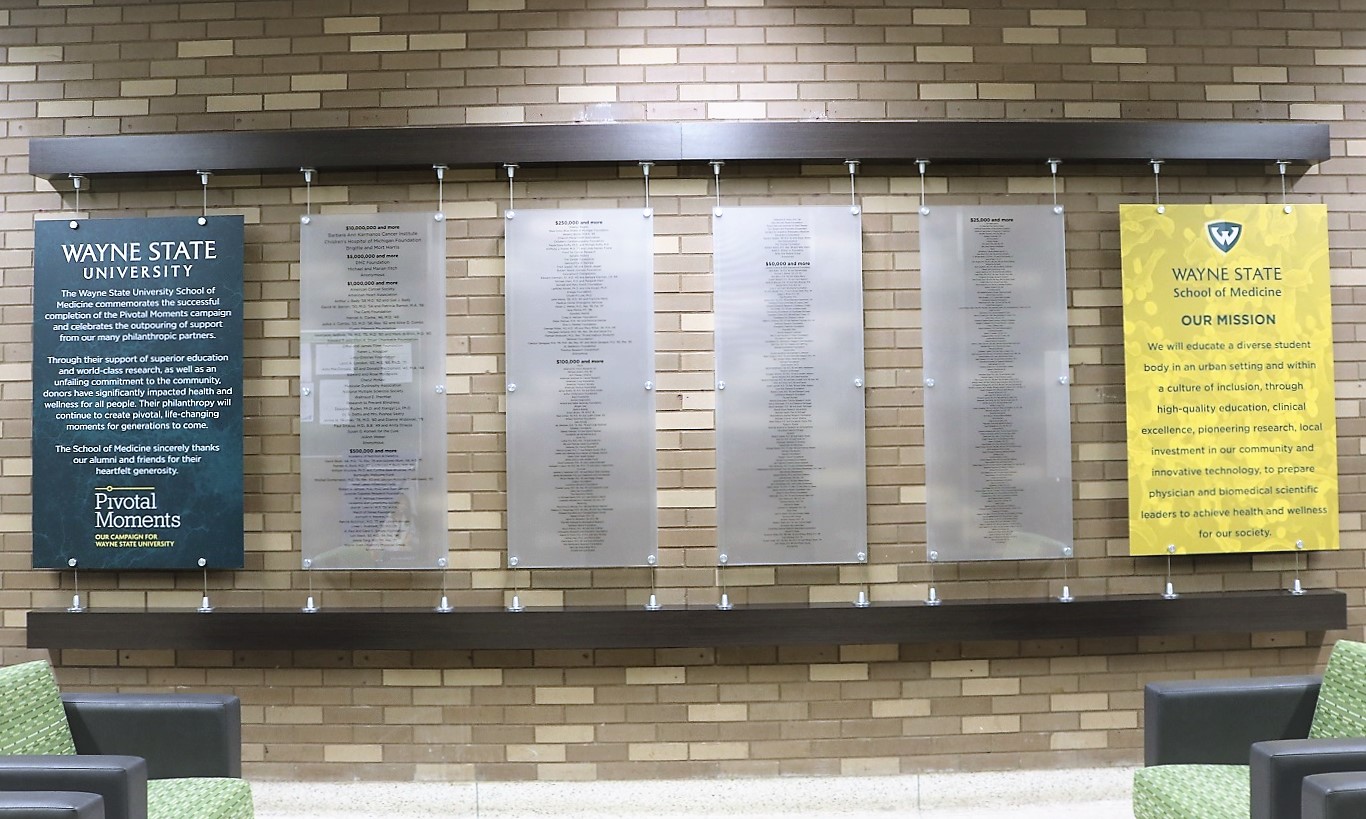 Visitors to the Wayne State University School of Medicine’s Scott Hall may notice the lengthy brick wall across from the first floor elevators received a facelift recently.

The installation of six floating panels complimented by rich dark hardwood commemorates the successful completion of the Pivotal Moments campaign at the School of Medicine and celebrates the outpouring of support from its many philanthropic partners.  The School of Medicine raised $190 million during the campaign, which publicly launched in 2014.

The first panel reads, “Through their support of superior education and world-class research, as well as an unfailing commitment to the community, donors have significantly impacted health and wellness for all people. Their philanthropy will continue to create pivotal, life-changing moments for generations to come.” The final panel showcases the school’s mission statement. In between, four glass panels feature approximately 400 donors, organized by cumulative giving levels from $25,000 to $10 million. All donors are recognized for their total contributions to the School of Medicine over the duration of the campaign.

The university-wide Pivotal Moments campaign was the most ambitious comprehensive fundraising effort in Wayne State's 150-year history. More than 84,000 alumni, neighbors and friends, including corporations and foundations, combined to achieve a $776.5 million milestone, exceeding the university’s goal of $750 million.

Support for the School of Medicine during the campaign will propel several strategic priorities. Endowed funds for research will ensure the School of Medicine continues its legacy of discovery and innovation. Investment in the school's talented faculty and leadership means recruiting and retaining the best and the brightest to train the next generation of compassionate, patient-centered physicians and researchers. And, both annual and endowed scholarships will have a lasting impact on future generations of brilliant medical and graduate students.

Notable gifts supporting the school include:

• Cumulative gifts of $1 million or more from more than 35 donors made up of alumni, community leaders, current and former patients, as well as corporations, foundations and organizations.

To learn more about how to support the School of Medicine, contact Senior Director of Major Gifts Lori Robitaille at 313-993-4070 or lrobitai@med.wayne.edu.