To recognize exemplary service, the new faculty classification of Distinguished Service Professor was 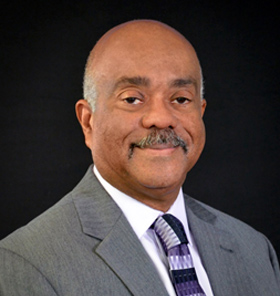 established. This classification is to be used in rare instances to designate senior members of the university faculty who have made extraordinary contributions to the university outside their own disciplines or who, by unusual service outside of the university, have brought great honor and recognition to the institution. The title of Distinguished Service Professor is bestowed upon the recipient by the president of the university upon the advice of the provost.

Dr. Gray is in the inaugural class of the first five faculty members to receive the distinction.

“I am honored and excited to be in the inaugural cohort of Wayne State Distinguished Service Professors,” said Dr. Gray, a Detroit resident. “I learned from my parents early in life that serving others is the highest calling one can have, and I have attempted to live by that philosophy my entire adult life. It is especially meaningful for me, because of WSU’s remarkable 150-year history of service to the City of Detroit and its citizens, as well as the state and the country. I am proud to be part of that legacy.”

A child and family advocate, Dr. Gray has been honored numerous times for his humanitarian efforts related to pediatric health care, particularly with children with special needs. He has served on a variety of state and national committees and organizations, and is one of the founding commissioners on the U.S. Medicaid and CHIP Payment and Access Commission.

He has served as chief medical consultant for the Michigan Department of Community Health - Children's Special Health Services and as vice president and medical director of Clinical Affairs for Blue Care Network.

A former president and chief executive officer of the DMC Children’s Hospital of Michigan, and a former WSU associate dean for Graduate Medical Education, Dr. Gray's history with Children's Hospital of Michigan dates to the late 1970s, when he served as chief pediatric resident. While with CHM, he also served as vice president of Graduate Medical Education, pediatric residency program director, chief of staff and chief operating officer. Under his leadership, the residency program developed several innovative programs and successfully recruited a significant number of minorities.

Over the span of his career, he has shown a remarkable devotion to the service of children, has served on the board of one of the first public charter schools in Detroit for nearly a decade and was the board chair of the Plymouth Educational Center for five years. As leader of the United Way for Southeastern Michigan, he focused on the issues confronting many Detroit children and families, including educational achievement and equity, food insecurity, homelessness and other social determinants of health.

Other WSU faculty who received the honor include:

Loraleigh Keashly, Ph.D., professor of Communications, uses her considerable insight into questions of supportive and effective work relationships to inform her service activities, committee membership and administrative duties at Wayne State. In the last four years alone, she has served on a broad range of committees and commissions, including the WSU Accessibility Initiative and RCM Budget Implementation Team. She has served as chair of the Department of Theatre and Dance Review Committee and the WSU Daycare Implementation Committee, and as a member of the WSU Diversity Campus Climate Working Group, the WSU Higher Learning Commission and the WSU General Education Reform Committee. She is actively sought out as a committee member at the university level. She has consulted with the U.S. Veterans Administration and the U.S. Air Force, and was recently asked to work with the United Nations High Commission on Refugees. She is regularly consulted by other universities about issues of work climate in higher education.

Peter Lichtenberg, Ph.D., is the director of the Institute of Gerontology and the Merrill Palmer Skillman Institute, and the founding director of the Wayne State University Lifespan Alliance. A professor of Psychology and Physical Medicine and Rehabilitation, Dr. Lichtenberg’s national, state and local service efforts are extensive and impactful. As director of the Institute of Gerontology, he collaborated with volunteers and community advisors to transform the IOG into a community-engaged institute that provides education and training to older adults and the professionals who serve them. The IOG now integrates older adults into all of its community programming and events. One of the highlights of those efforts is the creation of the Art of Aging Successfully Conference, which draws more than 500 older adults and artists each year — the conference is now in its 17th year. Dr. Lichtenberg also brought the Healthier Black Elders Center into the IOG in 2002. His service has resulted in widespread impact beyond his own field of psychology. As the leader of Psychologists in Long Term Care, he served on the first working group to develop, and co-write, practice standards for psychology for competency evaluations for the VA system. From 1999 to 2011, he chaired the Michigan Dementia Coalition, a group of more than 30 individuals from state government, aging networks, universities and leading provider organizations.

Kami Pothuckuchi, Ph.D., professor of Urban Planning, has been an icon in community engagement and service on behalf of Wayne State. She started the annual Wayne State Farmers Market and co-founded what became the Detroit Food Policy Council. She was a lead author of Detroit’s Food Security Policy, adopted by the Detroit City Council in 2009, and is the author of the first Detroit Food Policy Council annual report in 2010. Her analysis of the lessons from the Detroit FRESH project offers a crucial roadmap to enhanced food security in declining neighborhoods, and her writings about urban agriculture are influential among urban farmers, urban planners and policy-makers. She has received a number of awards, including the 2017 College Community Challenge Legacy Award for Outstanding Service, Ford Motor Company Fund; the 2013 Dr. Arthur L. Johnson Community Leadership Award, Wayne State University; the 2011 Michigan Plaque Award for SEED Wayne, Keep Michigan Beautiful; the 2010 Faculty Service Award, Wayne State University Alumni Association; and the 2008 Community Engagement Award (Faculty), Irvin D. Reid Honors College, WSU.

William Volz, Ph.D., professor of  professor of business law and ethics, has applied his academic expertise in management, business law and ethics to a broad array of settings, both within and outside the university, since coming to Wayne State in 1978. An insight into the benefits of his service is illustrated in his leadership as a board member in mental health-related organizations in the metropolitan Detroit community. He provided valuable service on the governing board for the Henry Ford Health System Behavioral Services. More recently, through his American Legion Post, Dr. Volz has fostered support for the Piquette Square initiative for veterans in Midtown Detroit. This project, created by the nonprofit Southwest Solutions, offers housing, counseling and support for homeless veterans. As a member of the Finance Committee and the Board of Trustees for the Detroit Historical Society, he contributed his expertise in budgeting and finance during the creation of the museum’s  “Project 1967” exhibit.