Chaur-Dong Hsu, M.D., M.P.H., FACOG, professor and chair of the Wayne State University Department of Obstetrics and Gynecology, is now the lead university faculty member overseeing WSU’s contract for the Perinatology Research Branch of the National Institute of Child Health and Human Development/National Institutes of Health.

He succeeds Sonia Hassan, M.D., in the role of project site manager in the contract between WSU and NICHD. 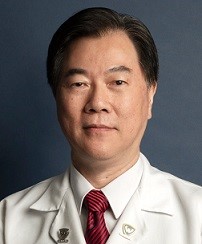 Dr. Hsu, an obstetrician/gynecologist and subspecialist in Maternal-Fetal Medicine, will “be a key leader in overseeing the now 26-year relationship between the Perinatology Research Branch and the Wayne State University School of Medicine,” said Jack D. Sobel, M.D., dean of the School of Medicine, in making the announcement April 5. He will continue serving as chair of Obstetrics and Gynecology.

The Perinatology Research Branch, an arm of the NIH, is dedicated to maternal-fetal research and combating preterm birth. It is the only center of its kind outside of the NIH’s Bethesda, Md., headquarters. Since locating at WSU, it has assisted more than 25,000 mothers.

Dr. Hsu also will serve as director of the Perinatal Research Initiative for WSU. This is in keeping with the current reporting structure, in which the project site manager for the contract between WSU and the NICHD is also director of the initiative.

He has led as chair three departments of Obstetrics and Gynecology, and directed several residency and fellowship programs. He has been a principal investigator of the Women’s Reproductive Health Research Career Development Program at Wayne State University, funded by the Extramural Program of NICHD/NIH.

Dr. Hsu’s research focuses on personalized obstetrics, specifically, preeclampsia and intra-amniotic infection. His research led to his election to the Board of Directors (and positions as secretary and treasurer) of the North American Society for the Study of Hypertension in Pregnancy. An NIH-funded investigator with more than 200 publications and abstracts, he is nationally and internationally known for his work.

At the Nassau University Medical Center, Dr. Hsu was credited with developing an evidence-based set of interventions known as “Hsu's Bundle,” which reduces C-section surgical site infections to nearly zero.