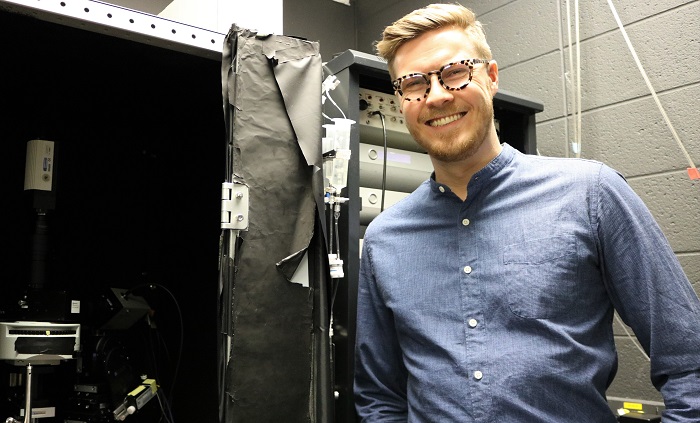 A post-undergraduate detour to Germany to research the role of literature in the development of a socialist canon in post-World War II Eastern Germany, fueled by an international grant from the German government, nearly derailed Wayne State University M.S/M.D. student Leo Hall's other passions - science and medicine.

After two years of medical school at the School of Medicine, Hall is in the middle of another research detour, but this time he's staying on track. Hall is spending the year pursuing his master's degree from the Department of Ophthalmology, Visual and Anatomical Sciences, performing experiments in the lab of WSU Assistant Professor Tomomi Ichinose, Ph.D.

Hall's mentorship in the Ichinose lab began before he became a medical student at WSU. "We are very happy to have him back to lab for a year. Since he restarted last summer, he is working very seriously. He has greatly contributed to lab's productivity," she said.

Hall received the 2018 Medical Student Eye Research Fellowship from the nonprofit Research to Prevent Blindness last year. He is one of a few students selected nationally for the honor, and the first student from Wayne State University in recent memory.
.
"It is a great achievement and was a great opportunity for him to learn how to write a medical research grant proposal," Dr. Ichinose said. "Grant writing is an important step for conducting one's own research. Because he was funded, now he learns how to manage the grant."

The $30,000 award will cover his stipend and lab expenses, as well as support the purchase of equipment and materials needed to perform experiments in Dr. Ichinose's lab.

"I am so happy for Leo Hall and Dr. Ichinose for obtaining one of the most difficult student research grants to achieve. This is a testimony to the capabilities of our outstanding medical students and the enriching academic and clinical environment that can support each student's growth," said Associate Professor Anju Goyal, M.D., the department's Medical Student Education Director.

Hall will use his award to build on his current research project in the Ichinose lab - "Alpha-7 nicotinic acetylcholine receptors in bipolar cells play a role in direction selectivity in mouse retina" - and hone his electrophysiological expertise through targeted training exercises and experiments.

"I feel greatly humbled and honored to have received this award," he said. "It is truly a testament to the mentoring I have received at Wayne State, specifically from Dr. Ichinose and members of the Department of Ophthalmology, Visual and Anatomical Sciences, that I was positioned to be the recipient of such a prestigious fellowship."

He received his undergraduate degree in German Literature and Pre-Health studies at the University of Notre Dame, then moved to Germany, where he considered getting his doctorate.

"Although I love German literature and feel fortunate to have had the opportunity to travel abroad to undertake in-depth scholarly work, I realized my passions lied elsewhere," Hall said.

Within the Department of Ophthalmology, Visual and Anatomical Sciences, Hall is the first medical student to take a year off to conduct research while at the same time completing a master's degree.

"This option allowed me to stay close to my research mentor, my friends and most importantly, my family," Hall said.

As early as 2014, "we felt that creating a special Translational Student Scholar year focusing on basic science research with some clinical experience could help students bridge their basic science knowledge, and enhance their capabilities as a resident and potentially future clinician-scientist," Dr. Goyal said. "The opportunity to do basic science research becomes limited in residency, and we felt it was a piece that we could add to enhance the medical student's education and long-term career." She said that department Chair and Professor Mark Juzych, M.D., recognized that a Master of Science degree "adds a distinction and skill set to the student's long-term career, and his leadership has been instrumental in the program coming to fruition in our department."

Hall encourages students interested in pursuing a similar dual-degree path to develop a relationship early on with a mentor who will vouch for them, and develop a good rapport.

"I hope to balance a career seeing patients and performing research, and this year will definitely assist in facilitating the latter," he said.