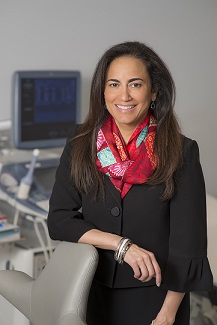 The Society for Reproductive Investigation will recognize a Wayne State University School of Medicine faculty member with one of its most prestigious awards in March.

Sonia Hassan, M.D., associate dean for Maternal, Perinatal and Child Health, will receive the society's Rogerio A. Lobo Award. The award, established in 2007 and presented annually, recognizes the most outstanding contribution to reproductive sciences by a member of the Society for Reproductive Investigation, said Murray Mitchell, DPhil, DSc, president of the society. It is named for a former president of the society and former editor‐in‐chief of the Journal of the Society for Gynecologic Investigation (now Reproductive Sciences).

Dr. Hassan will receive the award March 16 during the society's 66th annual Scientific Meeting, which will be held in Paris, France.

"It is an honor to receive the Rogerio A. Lobo Award given by a society whose mission is to advance reproductive and women's health care through outstanding research and training," said Dr. Hassan, a professor of Obstetrics and Gynecology, and director of the Wayne State University Perinatal Research Initiative.

"Wayne State University has provided me with extraordinary opportunities for education, clinical training, cutting-edge research and patient care," she added. "We have been fortunate to work in areas that changed the practice of medicine to improve the health of pregnant mothers and their children. I am very grateful for the remarkable opportunities, support and environment I have received from Wayne State University, my family, friends, colleagues and the exceptional team at the Perinatology Research Branch."

Dr. Hassan is the founder and director of the Center for Advanced Obstetrical Care and Research. She is the project site manager for the Perinatology Research Branch of the Eunice Kennedy Shriver National Institute of Child Health and Human Development of the National Institutes of Health, which is located at WSU.

In addition to her roles with WSU and the PRB, Dr. Hassan is the founder of Make Your Date, a nonprofit organization launched with the city of Detroit to reduce preterm birth, the leading cause of infant mortality. She also is co-chair of the State of Michigan's Infant Mortality Advisory Council.

She is the author or co-author of more than 300 publications and was the lead author of a multi-center, international, randomized controlled trial of vaginal progesterone for the prevention of preterm birth, which demonstrated that the use of vaginal progesterone decreases the rate of preterm birth before 33 weeks of gestation by 45 percent and respiratory distress syndrome by 61 percent.

She was the National Arab American Medical Association's Michigan Healthcare Professional of the Year in 2015 and was recognized in 2014 with the WSU School of Medicine Distinguished Alumni Award. In 2014, Dr. Hassan was named a Health Care Hero by Crain's Detroit Business and was selected as a Michiganian of the Year by The Detroit News. She received the March of Dimes Michigan Prematurity Prevention Hero Award in 2013.