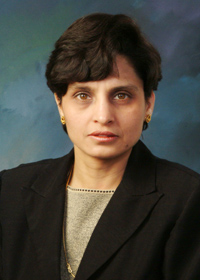 A Wayne State University School of Medicine faculty member will receive the Wayne Women LEAD Woman of Distinction Award for her extensive engagement and contributions to the Women in Medicine and Science group, gender equality, gender pay equity, and advocacy for professional development and support for working mothers.

Beena Sood, M.D., M.S., professor of Pediatrics, will be recognized with the award Nov. 1. The Wayne Women LEAD Woman of Distinction Award is presented annually to a Wayne State University woman employee who has demonstrated a sustained commitment to the professional development of women and/or issues of diversity, equity and inclusion.

"I am deeply honored to receive the Woman of Distinction Award, but truly this award recognizes not only my efforts, but also the efforts of members of the Women in Medicine and Science Advisory Group, the Commission on the Status of Women and the American Association of University Professors to encourage dialog and provide an environment at WSU where all employees -- men and women -- can thrive, succeed and find fulfilment," said Dr. Sood, who has been a member of the faculty since 2001. "This award reinforces the commitment of WSU toward promoting gender equality. Finally, this award celebrates the contributions women make - at work and at home."

Dr. Sood will be honored at the Woman of Distinction Awards Ceremony from 4 to 6 p.m. Nov. 1, in the Student Center Ballroom on main campus.

A School of Medicine representative of WIMS since 2015, Dr. Sood is passionate about gender equity in the workplace. As chair of the group at the School of Medicine, she has collaborated with other groups on campus to explore gender equity initiatives. She collaboratively led an analysis of the gender pay gap at WSU and showed that lack of professional advancement opportunities for women was the most powerful determinant of pay disparities. The results were presented at national conferences and to the WSU president and provost. The group is now working on measures to achieve gender pay equity.

Dr. Sood mentored a WSU medical student in conducting a study to assess the knowledge and attitudes of employees and trainees regarding the federal requirement for breaks for nursing mothers and availability of lactation rooms at WSU and the Detroit Medical Center. The data were presented at several local and national meetings. In recognition of this work and other initiatives across campus, WSU received the Michigan Breastfeeding Friendly Workplace Award in September 2018.

Under Dr. Sood's leadership, the WIMS Advisory Group has organized lectureships, workshops, panel discussions and book clubs to engage faculty in diverse topics, including gender pay gap, negotiation skills, climbing the academic ladder, work-life balance, getting to the C Suite and under-representation of women in surgical specialties. The group has expanded its reach by engaging trainees to prepare them for future academic success. Members have initiated an undergraduate WIMS intern program, engaged with medical students at journal clubs, and held round-table discussions with graduate students and post-doctoral students.

In her role as a professor of Pediatrics, Dr. Sood has mentored numerous undergraduate and medical students, residents, fellows and junior faculty, almost half of them women.

"Although concerted effort over the past few decades has led to increasing numbers of women joining the work force and assuming important roles in academia and government, barriers to women's success that are frequently subconscious persist," Dr. Sood said. "Both men and women tend to underestimate women's work and abilities because of repeated exposure to pervasive cultural stereotypes. As a result, women in academia are still paid less, promoted less frequently, win fewer grants and are more likely to leave research than similarly qualified men. Paradoxically, despite being paid less, women physicians have better patient outcomes. Women work harder and longer hours than men to juggle careers and domestic responsibilities. Providing equal opportunities for women in academia requires change at every level."

Through the establishment of COSW in 1971 and the WIMS group in 2013, WSU and the School of Medicine provide a supportive milieu to explore gender equity across campus and to brainstorm solutions to the changing problems that women in academia experience, she added. "As an academician who had benefited from the tremendous amount of work already put into empowering women in the workplace, it is a privilege for me to work with other successful women academicians to achieve gender parity at WSU."

However, a problem as longstanding and widespread as the gender gap can have neither a quick fix nor can it be solved by the actions of individual women alone, Dr. Sood said. As noted in the Harvard Business Review, "To achieve workplace equality, we need to redesign organizations - not just the women who work in them."

"Malala Yousafzai has said that humanity as a whole 'cannot succeed when half of us are held back.' I want to build upon that and say that women cannot achieve gender equality if half of us do not support gender equality," Dr. Sood said. "We need to enlist the support of men as advocates, stakeholders and agents of change. Flex time, on-site childcare and parental leave are not just women's issues, they are parent's issues. Gender equality liberates not only women but also men from prescribed social roles and gender stereotypes. When women are empowered, families flourish, and so do communities and nations."