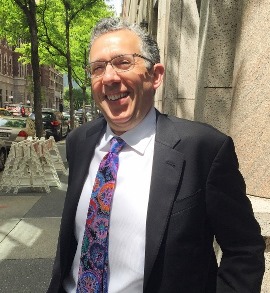 A film crew from NBC's "The Today Show" visited the Wayne State University School of Medicine campus last month to interview Department of Psychiatry and Behavioral Neurosciences Professor and Chair David Rosenberg, M.D., for a segment on teen internet addiction. The segment is scheduled to air in the 8 a.m. hour March 8 on the popular morning news magazine.

"The Today Show" airs on WDIV-TV (Channel 4) in Detroit.

Dr. Rosenberg talked to Today about brain changes seen in teenagers who use the internet excessively, and reveals what happens after treatment - including a fast from digital use - as well as after a relapse.

A digital fast, also known as a digital detox or unplugging, is when an individual voluntarily stops using all connected devices such as smart phones, tablets and computers for a specific period of time.

The show also interviewed three teenagers who are part of the department's study on internet addiction. While needing considerable additional research, that study suggests that brain abnormalities may normalize with a digital fast, but those normalizations may not persist if the individual's environment does not change.