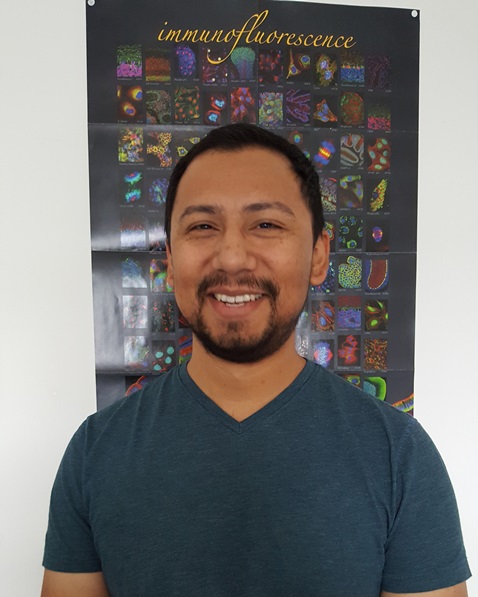 Fausto Varela is working to identify how certain proteins contribute to tumor development and growth in colorectal cancer, supported in part by a two-year fellowship from the National Institutes of Health.

"As one of the most common cancers in the United States, colorectal cancer, or CRC, is particularly deadly, often due to late-stage diagnoses," Varela said. "Our lab focuses on proteases, which are enzymes that break down other proteins. In cancer cells, normal cell function is perturbed by gene mutations and changes in the activity of proteins important for cellular division, metabolism and survival."
He is studying the cell-surface protease TMPRSS13, which has never been looked at in a cancer context.

"My work so far has uncovered a role for TMPRSS13 in the proliferation of cells and also in the escape from apoptosis (programmed cell death). We have also identified a protein, claudin-2, that may be regulated by TMPRSS13. Claudin-2 is particularly interesting because previous studies have found it to have tumor-promoting properties when overexpressed and it provides cells with chemo-resistance," he said.

He aims to discover how TMPRSS13 and claudin-2 interact to promote CRC.

"If we know how this interaction makes cancer cells resistant to treatment, we can identify target potential for treatment. In doing so, I hope to highlight the potential of TMPRSS13 as a treatment target," he said.

He is quick to credit his mentor, Dr. List, as a major factor in his success.

"It is really hard to put into words what it means to me. One thing I struggle with a lot is imposter syndrome — the feeling like I don't deserve to be where I'm at now and my academic career has just been a series of lucky circumstances. But what brings me back is acknowledging that I could not have reached this level through sheer luck, and my work and perseverance carries real weight and is paying off. As a first-generation student, all of that makes receiving this award a milestone in a career that I am very proud of," he said.
"(Dr. List) has gone above and beyond as a principal investigator. From day one she has repeatedly demonstrated how invested she is in me as a person, and painstakingly ensures I'm aware of any opportunities regarding funding, speaking, networking and career development opportunities. That's a big help given how alien of a world academia was for me when I first started at Wayne. She has helped me grow as a researcher and as an individual, and been there through the rough patches in and out of the lab, and I'm extremely grateful for the opportunity to work with her. She has been a prime example of what a mentor should be, something I hope to carry forward in my own career," he said.

Varela received a Best Poster Award for his work at the 2015 American Society for Biochemistry and Molecular Biology Special Symposium on Membrane-Anchor Serine Proteases, his first conference as a graduate student, and was invited to speak at the same meeting earlier this year. He has received the Carl Storm Underrepresented Minority Fellowship to attend the Gordon Research Conference and Seminar on Plasminogen Activation and Extracellular Proteolysis.

He is also mentored by Department of Pharmacology Associate Professors Sokol Todi, Ph.D., and Izabela Podgorski, Ph.D., and colorectal cancer and chemotherapeutics clinician Anthony Shields, M.D. He is a member of WSU's Initiative for Minority Student Development program, directed by Joseph Dunbar, Ph.D. '70, and coordinated by Rasheeda Zafar, Ph.D.