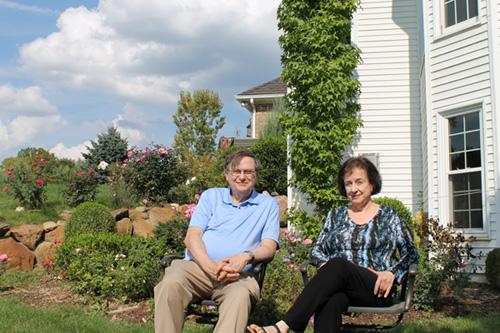 Family, education and a dedication to the community are what motivated Wayne State University sweethearts David Blum, M.D. '72, Res. '76, and his wife Marie Blum, MLIS '71 to establish the Herman and Eva Blum Endowed Award at the Wayne State University School of Medicine. This new annual award will be announced at Match Day starting in 2018. Fourth-year students who have displayed a devotion to community service throughout their time in medical school may be nominated for the award. The award announcement and additional details will be released near the end of the fall semester. The award recipient will receive $10,000 to help alleviate the burden of medical school debt.

"Growing up as a part of a poor Jewish family living in Detroit, I understand the difficulties of financial struggles," said Dr. Blum. "We hope this award will help lighten the load of medical school debt so that aspiring physicians can focus on becoming the compassionate, patient-focused doctors that they were trained to be at the Wayne State University School of Medicine."

Dr. and Mrs. Blum were inspired to establish the award in honor of his parents, Herman and Eva, because of the values to which they ascribed even in the face of tragedy. It was when Dr. Blum was a young adult that he learned the true depth of his parents' faith in humanity and the reason they were so dedicated to teaching their children to help people regardless of race, gender, ethnicity or religion.

"Throughout my childhood my parents had kept their family history a secret and did not tell us the terrible things that had happened to them during World War II," Dr. Blum explained.

It was when his oldest sister, Rose, was pregnant with her first child that Eva and Herman Blum finally told their children about the events that had transpired during the war.

"When Rose was pregnant, we found out that her father was not my father. It was because my parents wanted my sister to name her child after the father she had lost that they finally told us the entire story," said Dr. Blum. "My mother was married to a man named Ruben, and this man was my sister's father. One day my sister fell ill, so my mother stayed home to care for her. Ruben went to work. He was shot in the street by Nazi extermination forces that had been sent to kill any Jews they encountered. Mom and my sister fled to Siberia, and were eventually moved to a refugee camp in Bamberg, Germany. It was at this camp that my mother met my father, Herman."

Herman Blum also held scars from the war. Like Eva, he too had lost loved ones.

"My father had also been married before," explained Dr. Blum. "He had two children with his first wife, Miriam. His infant child, Shia, had passed away from starvation at two months old because Miriam could not get enough food to produce milk. Their city was occupied by the Nazis, and his was the last family forced to leave for resettlement in Treblinka. On that day, small trucks came in to round up the remaining Jews in the city to take them to the extermination camp. The Nazis took my dad and his family, but as my dad was getting into the truck, Miriam pushed him off and yelled for him to run. His wife and 4-year-old son, Moishe, were taken to Treblinka where they were killed. With no choice but to save his own life, he escaped into the woods. My then father spent the next three years as a part of an 80-man partisan group fighting the Nazis throughout Poland. Later, he met my mother in Bamberg, where I was born. My parents decided to move us to Detroit in 1949, where we all started a new life."

Through their generous gift and the story behind it, Dr. and Mrs. Blum hope to inspire future generations of physicians to pursue the same dedication to community service and compassionate, patient-centered care.

"Everyone who gets nominated for the Herman and Eva Endowed Award has won. They may not get $10,000 off their debt, but they will have won, and people will have won. In Jewish tradition it is believed that if you save one life, it is like saving all of humanity. I want new generations of WSU School of Medicine physicians to remember that," Dr. Blum said.

Dr. Blum decided to create the award six months after he turned 70 to take advantage of the IRA charitable rollover benefits. He and Mrs. Blum hope others will recognize the importance of philanthropy, and join them in making a gift to the School of Medicine. To learn more about how to make a gift, please contact Lori Robitaille at lrobitai@med.wayne.edu or 313-993-4070.