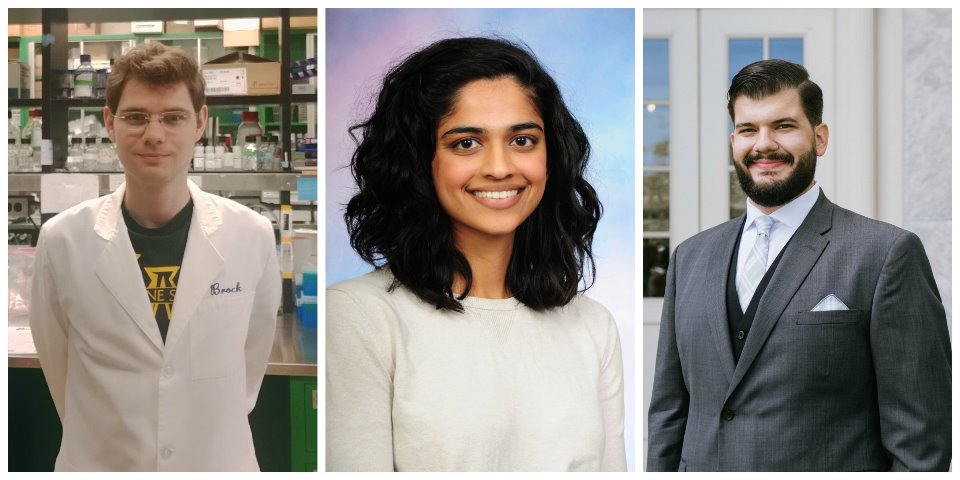 âI was really pleased to see all of our hard work pay off,â Brock said of receiving the award.
He is mentored by Professor and Chair of Pharmacology Raymond Mattingly, Ph.D.

âHe is well-deserving of the award, but that is not enough in a very competitive process, where the best candidates from all across the country are in the pool,â Dr. Mattingly said. âI think Ethanâs hard work and focus were what pushed his application to the top of this highly-accomplished group.â

Brockâs project, âSprouty4 is a Negative Regulator of ERK/MAPK Signaling in Breast Cancer and Plays a Role in the Transition from In Situ to Invasive Disease,â investigates a marker that could aid in categorizing pre-invasive cancer as problematic or not.

The current system doesnât predict which pre-invasive lesions will go on to become invasive cancer and which will not because current science lacks reliable markers to help doctors differentiate between problematic and non-problematic DCIS.

âSo, to err on the side of safety it is standard for patients with DCIS to receive radiation after surgery. Unfortunately, studies have shown that this early intervention is not enough to substantially decrease the amount of advanced disease. This has led researchers and doctors to believe we are over-treating many patients, which translates to unneeded physical, psychological and financial burden,â Brock added.

Brock received support from the Cancer Biology Graduate Programâs NIH T32 training grant from 2015 to 2017. He also received the Cancer Biology Directorâs Award, and, in his first year of the program, the Deanâs Enhancement for Undergraduate Academic Achievement Award. His poster presentation won third place at the KCI Molecular Therapeutics Annual Research Symposium earlier this year.

âOne of the main responsibilities, and benefits, of my position is to provide mentorship to a diverse array of students and fellows. I am fully committed to the success of all my trainees, and it is always very rewarding to be involved in the early stages of the career of an emerging scientist like Ethan, who is clearly poised to achieve great things,â Dr. Mattingly added. âI would like to thank the many colleagues who work so hard on the admissions process to bring such outstanding students into our graduate programs.â

âWhenever I tell someone I study tryptophan, they always seem to make a joke about turkey and getting sleepy after a big Thanksgiving meal, but tryptophan plays a much bigger role than that in our bodies,â Guastella said.
His project, âPatient-derived glioblastoma in vitro and in vivo studies of tryptophan metabolism via the kynurenine pathway,â investigates the role of tryptophan metabolism in brain tumors.

âWhat I am looking at is the interaction of the kynurenine pathway with p53, an important protein that kills cancer cells. My hypothesis is that the kynurenine pathway is degrading p53, leading to a more âaggressiveâ tumor,â he explained. âThe goal is to discover potential novel targets for brain tumor patients, who are in dire need of new therapies. My preliminary data so far is looking promising. I have a lot more work to do before I can say whether my hypothesis is correct or not, but thatâs why I went into research. Exploring the unknown and pushing the boundaries of whatâs known, thatâs the joy of science.â

Guastella is mentored by Sandeep Mittal, M.D., chair of the Department of Neurosurgery and director of the Translational Neuro-Oncology Research Lab.

âAnthony is a hard worker with a passion for science. He is my first graduate student, and we have both grown through this experience. It has been a pleasure working with him and watching him grow as a scientist,â Dr. Mittal said.

Guastella received the Deanâs Diversity Fellowship in his first year of the program, the Initiative to Maximize Student Development Fellowship in year two and was awarded a spot on the T32 training grant in his third year.

He also won first place for his poster presentation at the Cancer Biology Graduate Student Research Symposium and first place at an international conference for tryptophan research. He received a spot and travel award to attend an NIH-sponsored metabolomics workshop in Alabama in his third year of the program.

âI am extremely grateful for this incredible opportunity and am very humbled that the NIH felt my ideas were worth funding. I spent countless hours reading literature and performing experiments trying to develop my hypothesis. This moment has been years in the making, so itâs exciting to finally harvest the fruits of my labor,â Guastella said.

Shaik is in her fifth year of the Cancer Biology program and will return for her clinical M.D. years in 2018.

She is mentored by Associate Professor of Oncology Michele Cote, Ph.D., M.P.H.

âI am thrilled that the novel work Asra has proposed to examine the underlying mechanisms that put women who have benign breast disease at greater risk for later developing breast cancer has been selected for funding by the National Cancer Institute. In particular, the focus on African-American women who have worse outcomes after a diagnosis of breast cancer, and who are diagnosed at younger ages, highlights Asra's commitment to use her understanding of cancer biology to reduce cancer disparities,â Dr. Cote said.

âAfrican-American women suffer a disproportionately high breast cancer mortality rate and are more likely to be diagnosed with young-onset and aggressive cancer subtypes. Our findings may point to mechanisms that contribute to cancer development and may also help better identify women who are at high risk who are poised to benefit from additional screening or chemoprevention,â Shaik said.

Shaik was selected in August 2015 to be a Susan G. Komen for the Cure Graduate Trainee in Breast Cancer Disparities Research, and received the American Association for Cancer Research-Genentech Scholar-in-Training Award to support travel to the November 2016 Molecular Epidemiology Working Group Meeting "Improving Cancer Risk: Prediction for Prevention and Early Detection.â

âAsra is an extremely intelligent, thoughtful student who can take a complex process, such as cancer development, and break it into pieces for further study. I have no doubt that she will be a caring, innovative, academic physician who will excel at patient care, teaching and research,â Dr. Cote said. âHer work has been well received at various national conferences, and this new award will allow her to continue building her reputation as a leader in molecular cancer disparities research.â

For more information about the Cancer Biology Graduate Program at the Wayne State University School of Medicine, visit http://cancerbiologyprogram.med.wayne.edu/