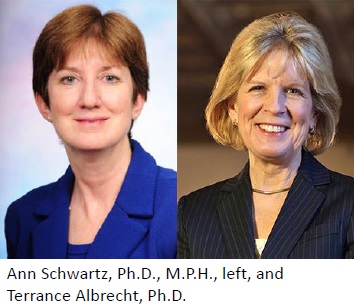 The Barbara Ann Karmanos Cancer Institute and the Wayne State University School of Medicine will launch the nation's largest study of African-American cancer survivors to better understand disproportionately high incidence and mortality rates from cancer and its impact on this specific patient population.

The study is being funded with a five-year, $9 million grant from the National Cancer Institute. Karmanos Cancer Institute Deputy Center Director and Wayne State University Professor of Oncology Ann Schwartz, Ph.D., M.P.H., and Terrance Albrecht, Ph.D., associate director for KCI Population Sciences and professor of Family Medicine and Public Health Sciences for the School of Medicine, will serve as principal investigators.

"Disparities in cancer survivorship that disproportionately burden African-Americans are the product of the complex interactions occurring among genetic and biological factors and social, behavior and environmental factors," Dr. Schwartz said. "It is crucial that we better understand why African-Americans are often diagnosed with cancer at higher rates and why survival after that diagnosis is lower than in other populations.

"This study represents a critically important opportunity to bring together the extraordinary expertise of our population scientists and our laboratories and resources at Karmanos and the Wayne State School of Medicine," she said. "We will use the knowledge gained through this study to improve treatment outcomes, thereby improving survival."

The Detroit ROCS study will focus on lung, breast, prostate and colorectal cancers — the four most common cancers — each of which is marked by poorer survival rates among African-American patients than white patients.

Multiple factors contribute to poorer survival among African-Americans with cancer, but most studies lack enough participants to adequately study these factors. Researchers at Karmanos and the Wayne State School of Medicine will investigate the factors that may affect cancer survival, such as type of treatment, genetics, social structures, support, neighborhood context, poverty, stress, racial discrimination, literacy and quality of life, and behaviors such as smoking, alcohol use, diet and physical activity.

"Race disparities in cancer outcomes result at least in part from preventable or modifiable factors, such as the ability to access and utilize care and also obtain other necessary health care services and resources," Dr. Albrecht said. "This project will provide an infrastructure for designing and conducting an array of studies to reduce disparities and will ultimately lead to interventions focused on improving outcomes in African-American cancer survivors across the United States."

A unique aspect of this study is the inclusion of 2,780 family members to understand how a cancer diagnosis affects the mental, physical and financial health of those providing care.

Detroit ROCS leverages the Detroit area population-based cancer registry, part of NCI's Surveillance, Epidemiology and End Results program, to identify African-Americans who were recently diagnosed with cancer. The SEER program supports cancer registries and provides information on cancer statistics in an effort to reduce the cancer burden among the U.S. population.

Researchers will collect comprehensive data through interviews with participants, information from medical records and biospecimens from participants who live in Wayne, Oakland and Macomb counties. These counties account for more than 70 percent of Michigan's African-American population, and approximately 21,000 people in these counties are diagnosed with cancer annually.

The study also brings an added benefit to doctors who treat African-American cancer patients.
"Several of our medical oncologists are directly involved in the study and together we are already developing training programs for our residents, fellows and community oncologists," Dr. Albrecht said. "These programs will be directly informed by what we learn about survivorship from this large group of African-American cancer survivors."

"As a National Cancer Institute-designated comprehensive cancer center, an important area of our focus is on population studies and disparities research," said Dr. Bepler, chair of Oncology for the WSU School of Medicine. "We are uniquely prepared to conduct cutting-edge research because of the rich and productive synergistic collaborations among our genetic and molecular epidemiologists and our social and behavioral scientists at Karmanos and Wayne State University School of Medicine."

"This study is critical to ensuring that underserved populations in Detroit and around the country benefit from new approaches for cancer diagnosis, treatment and prevention," said M. Roy Wilson, president of Wayne State University. "Focusing on the complex factors that generate disparities in cancer among underserved populations, such as African-Americans, will lead to better treatments and improved approaches to cancer care for all Americans."

An earlier pilot study, supported by a $400,000 grant from GM Foundation and additional funds from Karmanos Cancer Institute, made it possible for Karmanos' scientists to collect the data necessary to secure the NCI funding for the larger study.