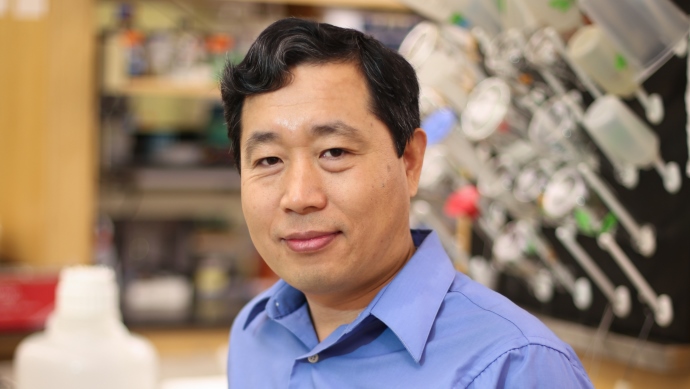 A research team at the Wayne State University School of Medicine Center for Molecular Medicine and Genetics led by Associate Professor of Molecular Medicine and Genetics Kezhong Zhang, Ph.D., has uncovered the key molecular network in the liver that controls the influence of circadian rhythm in lipid metabolism associated with metabolic disorders. The discovery could lead to better understanding, prevention and treatment of metabolic diseases such as diabetes.

Dr. Zhang studies mechanisms and impact of stress responses in health and disease. He received a five-year, $1.75 million funding renewal from the National Institutes of Health, for a total of 10 years of support for the project "Regulation of Circadian Metabolism by the Hepatic Transcription Factor CREBH."

Most living creatures have a 24-hour scale internal circadian clock oscillation that orchestrates behavior and physiology, Dr. Zhang explained. The internal clock is genetically encoded by a network of regulators that allow organisms to anticipate changes in the light-dark environment and influence sleep, feeding and metabolism. The biological circadian rhythm is closely associated with energy metabolism.

The Zhang lab identified a key stress sensor called CREBH in the liver. CREBH is regulated by the circadian clock to control production of liver enzymes or hormones that regulate blood lipid levels across the day-night circadian cycle. Dr. Zhang's work represents an important advancement in the understanding of the molecular basis governing the liver metabolism and whole body physiology across the circadian cycle. The related findings were published in Diabetes at http://diabetes.diabetesjournals.org/content/early/2016/08/08/db16-0298.long.

"Dysregulated circadian rhythm is believed to be one of major causes of human metabolic disease, cardiovascular disease, psychiatric disorders and even cancer. In industrialized societies, the problem of irregular circadian rhythm is not only related to shift workers and continental travels, but also to the public at large due to the modern lifestyle. In fact, shift workers, for example nurses, have higher risk of metabolic syndrome and breast cancer," Dr. Zhang said. "Our research identified a key liver metabolic regulator, CREBH, which regulates lipid levels across the circadian cycle. Because CREBH activity can be modulated by stress cues, such as inflammation, starvation and a high-fat diet, CREBH appears to serve as a molecular link by which stress changes circadian lipid profiles. This finding has profound impact in the understanding of the molecular basis controlling the development of metabolic disease, such as obesity, type-2 diabetes and fatty liver disease. Importantly, our work also provides an avenue to modulating circadian metabolism for therapeutic benefit for metabolic disease associated with dysregulated circadian rhythm."

Diabetes causes a number of complications, including some that make it harder for wounds to heal. More than 15 percent of patients with diabetes develop skin ulcers, often on the bottom of the foot. Drs. Zhang and Wang identified a key cell stress sensor called IRE1a that processes small non-coding RNA molecules, or microRNAs, in skin wound tissues caused by diabetic complications. The regulation is crucial for the wound healing process in an animal model with diabetes. The technology based on the discovery was patented by WSU and could be translated into therapeutics for wound healing in diabetes patients. The research findings were also published in Diabetes, available at http://diabetes.diabetesjournals.org/content/early/2016/09/14/db16-0052.