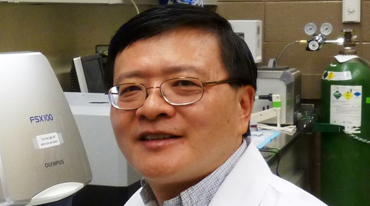 A Wayne State University School of Medicine researcher in the Department of Physiology was awarded a new four-year, $2.69 million grant from the National Heart, Lung and Blood Institute to generate an animal model carrying the most common mutation in patients with cystic fibrosis.

The Cystic Fibrosis Foundation approved additional funding to Dr. Sun's lab, to generate rabbits carrying the second most common mutation in cystic fibrosis patients, and to test potential therapeutic drugs in the animal model, awarding $413,068 to be used through Oct. 31, 2017.

Cystic fibrosis is a progressive genetic disease that causes persistent lung infections and, over time, limits the ability to breath. It is caused by mutations of gene encoding cystic fibrosis transmembrane conductance regulator, or CFTR, Dr. Sun said. According to the Cystic Fibrosis Foundation Patient Registry, more than 70,000 people worldwide are living with the disease, and approximately 1,000 new cases are diagnosed each year, often by age 2. The first drug targeting the basic genetic defect in CF, a CFTR modulator, was approved in 2012.

The goal for the first year of the project funded by the NHLBI (R01HL133162) is to generate CF rabbits carrying the CF mutation called knockin, using CRISPR/Cas9 gene editing technology.

"Using CRISPR/Cas9 gene editing technology, we have developed the first CF rabbits carrying no CFTR gene (CFTR gene knockout) in the world. Initial work on the rabbits revealed a spectrum of clinical presentations that is similar to that in human CF patients," Dr. Sun said. "The goals of this grant are to generate rabbits carrying the most common mutation in CF patients, F508del CFTR (CF mutation knockin), to characterize the CF rabbits and to test the efficacy of therapeutic reagents for CF drug discovery."