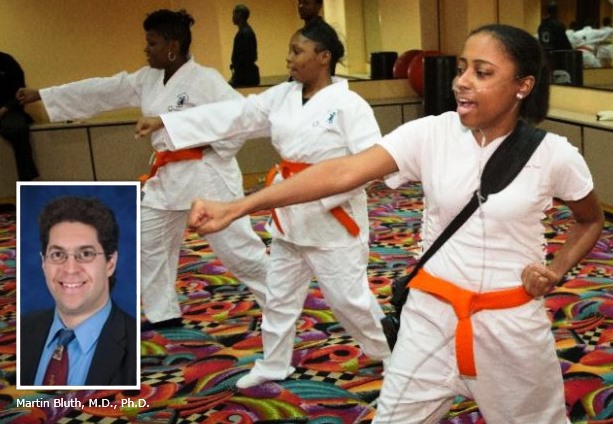 A new study verifies that a global martial arts program headquartered in the Detroit area decreases pain scores in children with cancer.

"Although there is strong anecdotal support from participants and their families, this is the first study that objectively demonstrates that the KKC process statistically reduces pain by an average of 40 percent in 85 percent of those who participate in the program," Dr. Bluth said.

The paper looks at 43 males and 21 females 3 to 19 years old with childhood malignancies enrolled in a martial arts program encompassing meditation and movement modalities. Pain scores ranging from 0 to 10 were recorded before and after one-hour session interventions. The scores were crossed by total visits and tabulated by whether participant pain was reduced by at least one, stayed the same or increased in intensity immediately after a session. For 96.3 percent of the 80 total sessions reviewed, participants began with a pre-pain intensity score of at least 5 and up to 10, and the pain intensity was reduced after the session. Differences in pain scores were also compared by age and gender, and showed that a greater effect was achieved when baseline scores and participant age were higher.

The publication proves that the program works well, and can likely be applied to other diseases, Dr. Bluth said.

"I did not expect the actual data to be in tune with the anecdotal data the KKC had publicized before we committed to this study. I also expected a much smaller effect than the ones we observed - 40 percent pain reduction overall, with a greater reduction in older children who are not generally open about their pain. So I was rather surprised," he said.

While the majority of the study's pilot work was done in New York hospitals during a 10-year period, KKC has since created a robust local presence at WSU and at its new headquarters in Southfield, Mich. New local data will be incorporated into future publications.

As with the the majority of the Kids Kicking Cancer staff, Dr. Bluth, a Shotokan black belt, has an extensive background in martial arts, including Tai Chi and Chi Gung. He was appointed medical director in 2013, allowing the nonprofit to pursue funding from entities such as the National Institutes of Health and the National Cancer Institute, and health care advocacy groups, corporations and foundations.

"There are many layers of empowerment that KKC affords its participants. The KKC mantra, 'pain is a choice that you do not need to listen to,' is a rather powerful concept that can be applied to many other situations where fortifying the human condition and power that we all have within us can truly help us 'bring in the light and blow out the darkness,' which comprises the fabric of the organization as a whole," he said.

KKC plans to utilize the study data to secure additional funding for current and future programming. The organization recently hosted its first Martial Arts Therapy Symposium and more than 40 KKC martial arts therapists from the United States, Canada, Israel and Italy attended to create unified approaches and standard operating procedures, and to provide support and infrastructure to improve upon the latest study, including assessing different demographics and the number of interventions needed for sustained positive results, economics and to begin studies in different disease spaces, including asthma, obesity and sickle cell pain. The symposium was sponsored by the Henry Ford Foundation.