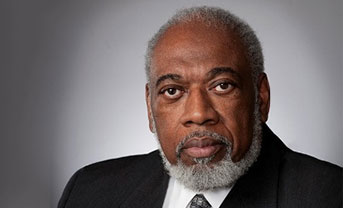 The Wayne State University School of Medicine has lost a huge voice and an even greater heart.

Silas Norman Jr., M.D., associate dean of Admissions, Diversity and Inclusion, died in the early morning hours of July 17, 2015. He was 74.

Services have yet to be finalized, but are expected to take place July 25 at Hartford Memorial Baptist Church in Detroit, where Dr. Norman served as a deacon.

Dr. Norman, a graduate of the school and a longtime member of the faculty, was a driving force for diversity, fairness and compassion for the underserved.

"We have lost a beloved faculty member, a determined leader, and more importantly, a great man," said Jack D. Sobel, M.D., dean of the School of Medicine. "In many ways Dr. Norman helped shape our School of Medicine. There are hundreds of people who will never forget his contributions to their success in medical school and in life."

After graduating with a bachelor's degree in natural sciences from Paine College in Augusta, Ga., Dr. Norman entered the School of Medicine as a medical student, and graduated in 1976. He completed his internship and residency in Internal Medicine at Detroit General Hospital. An assistant professor of Internal Medicine, he was appointed assistant dean for Admissions in 2003, and associate dean for Admissions, Diversity and Inclusion in 2010.

"In one simple phrase, Dr. Norman gave his life to the Wayne State University School of Medicine," said Herbert Smitherman Jr., M.D., M.P.H., interim vice dean of Diversity and Inclusion. "From medical student to internal medicine resident to faculty to dean of Admissions, Dr. Norman was engaged in every aspect of WSU School of Medicine life. Medicine was his ministry; whether providing care to prisoners, the underserved and uninsured or expanding opportunities in medicine for underrepresented people, he always cared beyond himself. And this is why he was loved by so many. He was an outstanding leader, physician, mentor and person, and most importantly, my friend. His presence will be greatly missed by all."

Dr. Norman served as a consultant to the Detroit Health Care for the Homeless project and the Detroit Department of Health & Wellness Promotion, working to see that thousands of uninsured and underserved people received much-needed health care. He was chair of the Detroit-based Community Health Awareness Group Inc., an organization dedicated to supporting individuals affected and infected with HIV and AIDS.

A medical suite at the State Prison of Southern Michigan in Jackson is named after Dr. Norman, who served as the facility's medical director. His commitment to social and humanistic medicine also led him to serve as chief medical officer for the Michigan Department of Corrections and medical director for the Wayne County Jails.

The recipient of many awards and honors, Dr. Norman was reserved about such recognition. "To be honored for the service that we give is a distinct privilege and an honor," he said upon receiving one of his many recognitions. "I think the opportunity to do this work is really a privilege. The community has a right to expect us to give some service."

In 2000, Dr. Norman received the Alumni Achievement Award from the United Negro College Fund. That same year the Wayne State University Organization of Black Alumni selected him for its Alumni Achievement Award, and the Michigan Department of Community Health presented him with the Association of State and Territorial Health Officials Vision Award.

He received the School of Medicine's Trailblazer Award in 2010. The award honors outstanding alumni and faculty who have made substantial contributions and demonstrated courage, initiative, innovation, risk-taking and leadership. During the 2011 commencement ceremony, Dr. Norman received the Distinguished Service Award for his work in diversity, his fairness and his compassion for the underserved.

In 2012, Dr. Norman was named a Detroit Everyday Hero by Verizon Wireless, which partnered with 100 Black Men of Greater Detroit and the Urban League of Detroit and Southeastern Michigan.

"He was a very compassionate, loving and giving person," said De'Andrea Matthews, interim director of Diversity and Inclusion for the School of Medicine, who began working with Dr. Norman in 2006. "He was a wonderful boss and a wonderful person in general. He was very caring about you as a person, and he was very much a family man. He has been a driving force behind diversity and the underserved."

Anyone who had the good fortune to hear Dr. Norman sing knew that he had a voice that rolled like thunder. He lent that talent to Detroit's critically acclaimed Brazeal Dennard Chorale, and it was no surprise when the chorale won gold and silver medals at the 2012 World Choir Games with his help.

"I am a product of the public schools of Augusta, Georgia," Dr. Norman said at that time. "My first remembrance of the joy of singing came in the third grade of the Charles T. Walker Elementary School. I remember the joy of the harmony and the words to some of the songs until this day. Music has been a passion and a comfort ever since. Throughout my education, at every level, I have had the privilege of being mentored and encouraged by passionate and well-trained musicians - in my community life and in my church life."