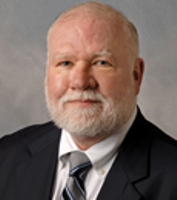 A Wayne State University School of Medicine ophthalmologist appeared this week on a television program to explain a relatively rare condition that caused a Detroit woman severe vision problems.

Robert Tomsak, M.D., Ph.D., professor of Ophthalmology and Neurology, a specialist in Neuro-ophthalmology and a member of the Wayne State University Physician Group, was featured on a segment of "Mystery Diagnosis" on Wednesday evening. The program airs on the Oprah Winfrey Network.

In the segment called "Stolen Senses," Dr. Tomsak explained the condition of Nadine Miller of Detroit, who in 2008 suddenly began losing her sight.

Miller, the mother of two teenage sons, was 43 at the time the "attacks" began. She experience blurred vision to the point of not being able to read or distinguish shapes and suffered severe headaches.

"By the time I was seen by a doctor or arrived at the emergency room, all I could see was a doctor's blank face," she said. "I could not distinguish a person's features. I could not see the large 'E' on an eye chart."

The doctor who initially treated Miller ordered a magnetic resonance imaging scan and prescribed a steroidal treatment for her inflamed optic nerve. Miller's vision improved over several weeks, but she then suffered a relapse. This time, not only did her vision diminish drastically, she began experiencing what she described as "hallucinations" in which she saw strange lights and shapes.

Later, a biopsy from a craniotomy showed that Miller suffered from chronic relapsing inflammatory optic neuropathy, a condition in which the body's immune system attacks the optic nerve, causing severe inflammation. Left untreated, the condition can lead to blindness.

The condition is uncommon and was originally described in medical literature in 2003, Dr. Tomsak said. Fewer than 25 cases have been identified.

"The body starts fighting itself," Dr. Tomsak said. "The swelling is an inflammatory response."

The "hallucinations" of light that Miller experienced, he said, could have been caused by the brain making up for the loss of vision, essentially trying to fill in the gaps.

While he was not the initial physician who handled Miller's case, Dr. Tomsak has seen her for follow-up visits. Murali Guthikonda, M.D., chair of the Wayne State University Department of Neurosurgery, and Omar Kahn, M.D., professor of WSU Neurology, also treated Miller.

While she initially received steroid therapy, Miller said Dr. Kahn prescribed Rituxan, a non-steroidal therapy. She continues to receive intravenous treatments every six months at the Karmanos Infusion Center, and her vision has improved.