Over the coming months, look for stories that feature some of the many Wayne State initiatives and pioneering individuals committed to automotive and manufacturing innovation. This content is part of WSU's Warriors in Action campaign highlighting how Wayne State is making a difference. 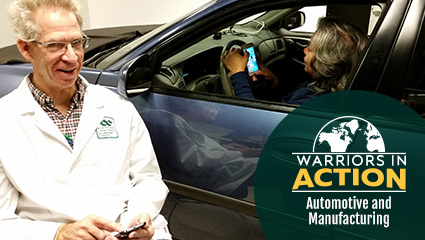 Distracted driving is a significant contributor to motor vehicle accidents and fatalities, and texting is a big part of driver distraction that continues to be on the rise.

But texting isn’t the only way today’s motorists can lose sight of the road. The effects of driving while under the influence of alcohol and drugs (both prescription and illegal), environmental hazards, and age can prove to be just as costly behind the wheel.

Researchers in Wayne State University’s occupational therapy and pharmaceutical sciences departments in the Eugene Applebaum College of Pharmacy and Health Sciences (EACPHS) continually test the above effects and more — all within the safe confines of a 2001 full-size sedan.

“I’ve seen this too many times on the highway, in broad daylight, where someone is weaving on the road. You pull up alongside them and they have a phone in their hand,” said Randall Commissaris, associate professor of pharmaceutical sciences in EACPHS. “I hold up my index finger and wag it at them in a ‘don’t do that’ sort of way. They usually wag a different finger back at me. In that situation, I can’t do much more than that to raise awareness.”

But in the lab, Commissaris can do a lot. The stationary vehicle used in the driving simulator lab has a state-of-the-art data collection system that assists researchers and industry leaders in developing new products and practices to reduce injuries and fatalities. The interior of the driving simulator is a “real car” interior, including steering wheel, gas and brake pedals, ignition switch, rear and side view mirrors, headlights, gear shift, and turn signals. It is housed in a laboratory with an adjacent observation room equipped with a one-way mirror.

The laboratory has four viewing screens that offer a 220-degree field of view. The simulator's software enables researchers to create a variety of scenarios, ranging from peaceful country roads to busy city streets or even interstate freeways. Traffic volumes, lighting and weather conditions also can be manipulated in this virtual environment.

“I inherited the car from a predecessor in the OT program. The OT program was the proprietor of the vehicle,” Head said. “But Randy was very interested in it, and he approached me to do some research on over-the-counter medicines and how it affects the driver. Although he has more technical experience, we both learned together and I came along for the ride.”

Head saw it as a way to bring along her OT students, too, who primarily were used it in clinical settings for people who needed to get back on the road after an injury, illness or stroke. “We found a way to where OT could fit in,” Head said.

In 2015, a study by Commissaris, Head and other researchers created the perfect example of their interdisciplinary teamwork. The study examined the influence of driver age (18 to 59 years old) and other factors on the disruptive effects of texting on simulated driving behavior. While “driving” the simulator, participants were engaged in a series of brief text conversations with a member of the research team.

The study confirmed that texting impairs driving simulator performance. Moreover, it demonstrated that for highly skilled texters, the effects of texting on driving are actually worse for older drivers. Given the increasing frequency of texting while driving within virtually all age groups, these data suggest that “no texting while driving” education and public service messages need to be continued and should be expanded to target older drivers as well.

Up next for the group is to study the effects of marijuana on driving. This will be an extension of research Commissaris started that looks at the effects over-the-counter medications have on the ability to drive.

“One of the nice things about this collaborative project Doreen and I are working on is it really allows us to engage our students in research. This is a project people can relate to very easily,” Commissaris said. “For someone who’s not an experienced researcher, something that involves a real-world problem such as texting and driving — and having a research tool that can help answer important questions — just brings them right into the research realm so effectively.”