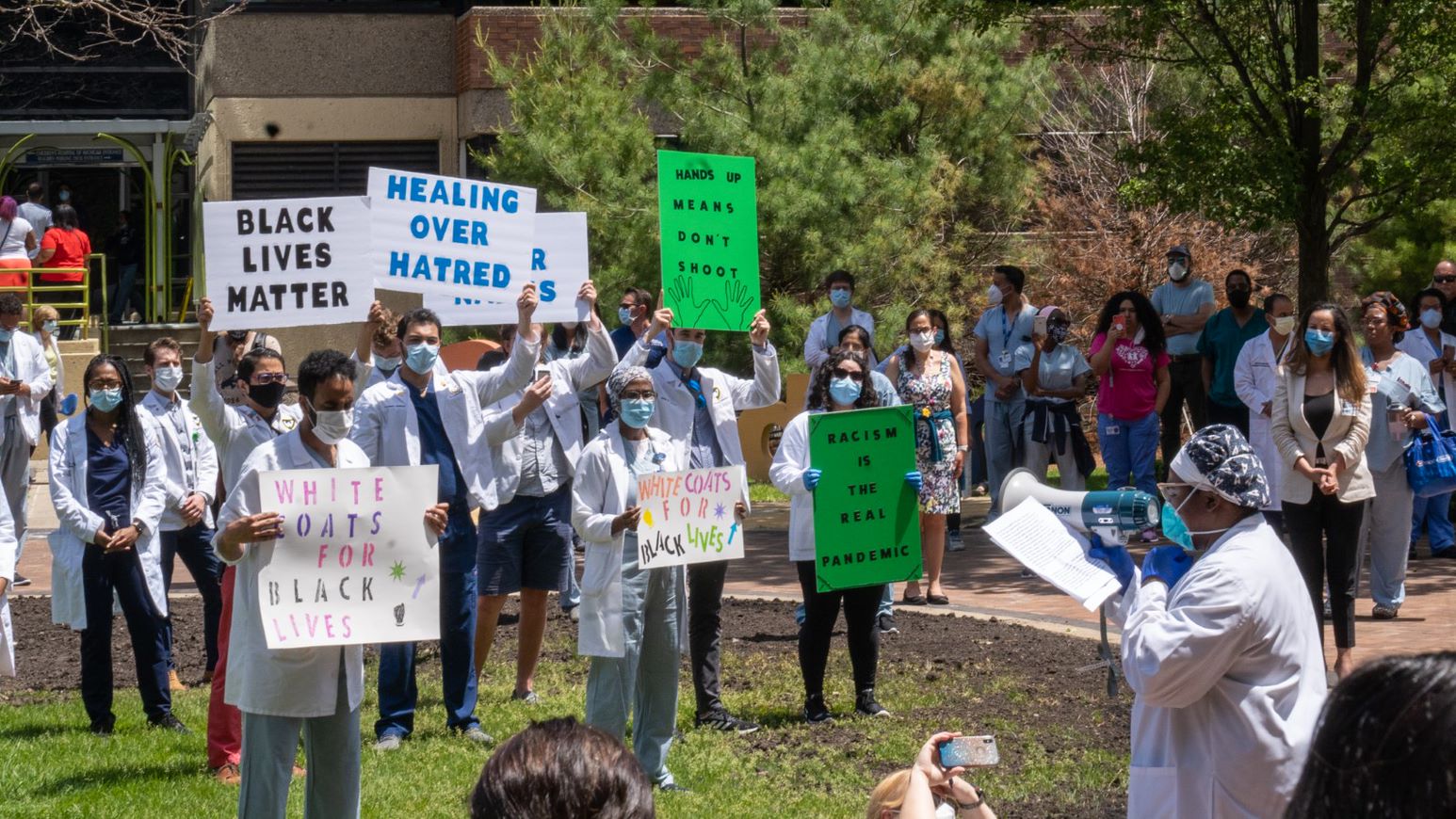 Nearly 300 physicians, health care workers and medical students kneeled for 10 minutes in Brush Mall at the Detroit Medical Center complex to demonstrate their support in the call to end systemic racism in policing across America. 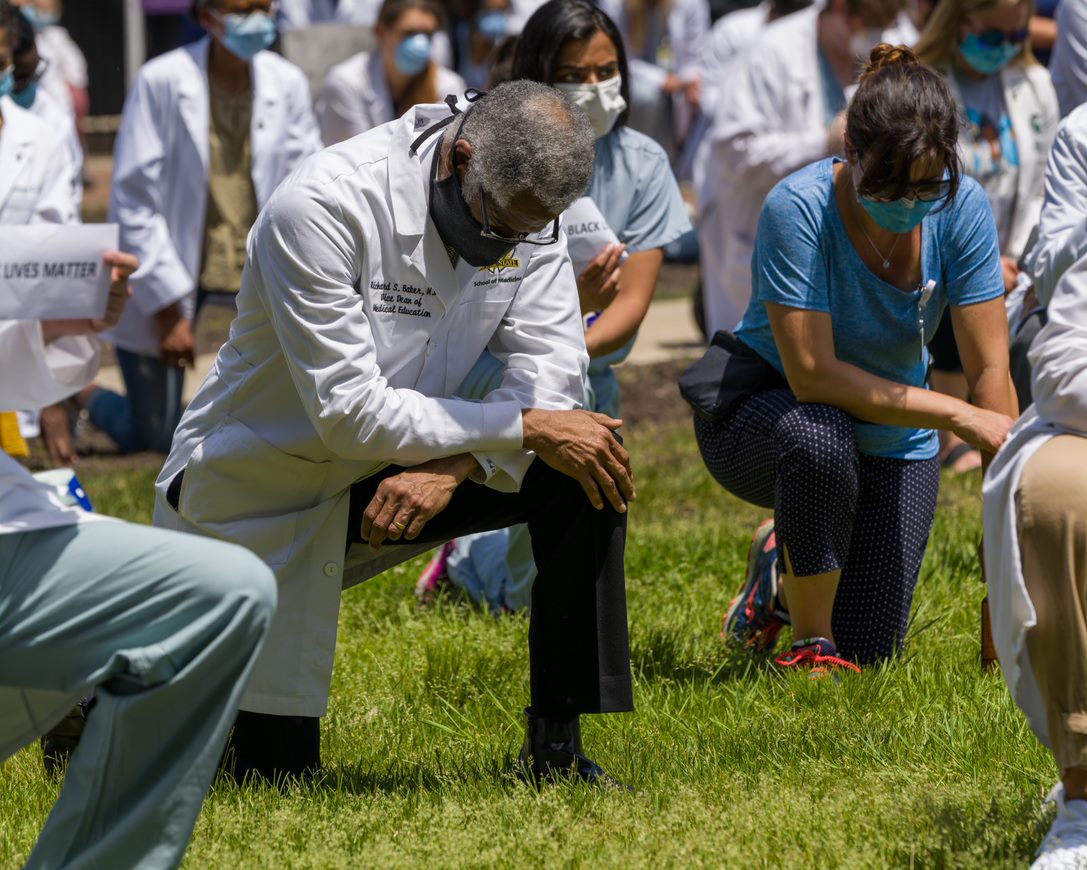 Tejada, M.D., under the leadership of a coalition of African American medical residents training in Detroit academic health systems, was part of a nationwide effort by White Coats for Black Lives, a medical student-run organization.

White Coats for Black Lives was born out of the National White Coat Die-In demonstrations that took place on medical campuses across the nation Dec. 10, 2014, in reaction to the deaths of Michael Brown and Eric Garner at the hands of police in Ferguson, Mo., and New York, respectively. White Coats for Black Lives seeks to safeguard the lives and well-being of patients through the elimination of racism, and to dismantle racism in medicine and promote the health, well-being and self-determination of people of color.

Practicing social distancing and wearing masks because of the COVID-19 pandemic, those gathered listened to comments from organizers and then kneeled for 10 minutes, approximately the amount of time that Minneapolis police officer Derek Chauvin knelt on the neck of George Floyd, a 46-year-old black man, while Floyd was handcuffed and lying face down on the street. While Floyd’s death on May 25 was the catalyst for the event, and demonstrations throughout the United States and the world, the White Coats for Black Lives events that took part nationwide also memorialized other African Americans killed by police.

“I once spent a few weeks working at the winter Olympics. Everyone in the village (other than the athletes) wore the same uniform -- doctors, techs, nurses, cafeteria workers -- everyone. On the outside, we were the same. It left a profound impression on me,” said Dean Mark Schweitzer, who knelt with the crowd. “On the outside we all should be the same. Seeing that sea of white coats, spread six feet apart, kneeling in unison, is what our society should be. We are all the same, on the inside and on the outside. The white coat was a great leveler this Friday, but it shouldn't be. Let’s hope we can all build a society where an external uniform is not needed to show that we are all uniform.”

Dr. Opara said she felt compelled to assist in organizing the event.

“I am in the middle of putting together my promotion and tenure materials, teaching residents in clinic and running an outreach program for COVID-19 testing for the housing insecure in the city of 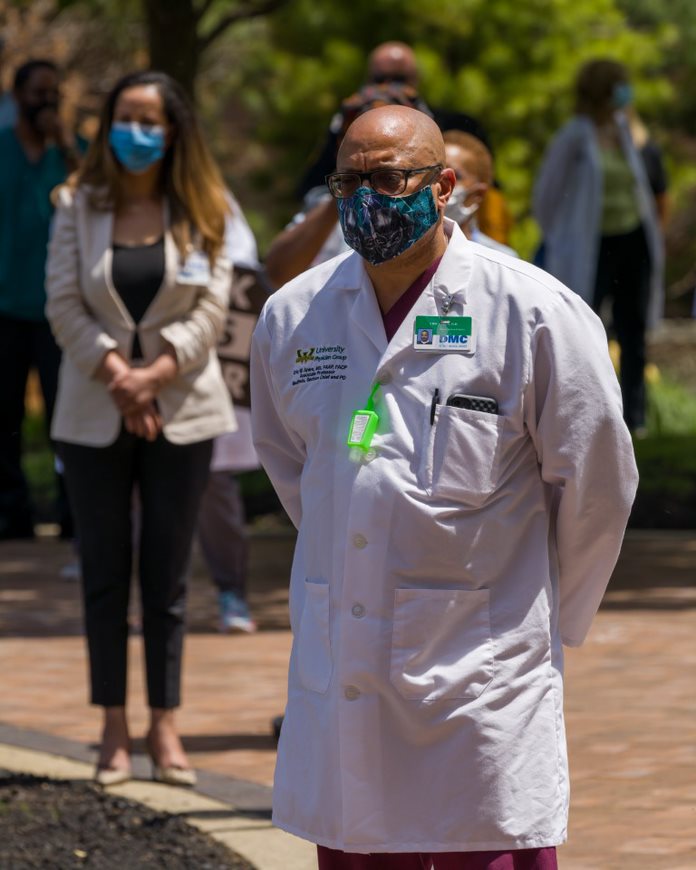 Detroit and I just couldn't focus on anything for the past two to three weeks, nor could I sleep,” she said. “The murders of George Floyd, Ahmaud Arbery, Breonna Taylor, Tony McDade and the numerous other black men, women and transgendered persons weighed heavy on my soul, and I had to act toward justice otherwise I would be swallowed up by the pain and sorrow.”

Dr. Opara noted that Martin Luther King, in 1966, said that of all the forms of inequality, injustice in health care “is the most shocking and the most inhuman because it often results in physical death.”

“Systemic, structural and institutionalized racism in all spheres kills directly and indirectly,” Dr. Opara said. “We have an obligation as physicians to stand in the gap for those that are disenfranchised and marginalized and advocate for justice. Silence is complicity. It is time that we demonstrated to our patients, our communities, the government and all sectors of society that we are unafraid to stand for what is right. There is no point in studying and practicing medicine if it doesn't translate to improved health outcomes, and medicine cannot translate to sustainable and meaningfully improved outcomes without addressing social determinants of health and the structural inequities that drive the disparate distribution of these determinants to various populations. This event meant that we, as a community of practice, have chosen to finally take up the mantle of social justice to uphold the sanctity and integrity of black lives so that all lives can truly matter.”

Diane Levine, M.D., professor of Internal Medicine and vice chair for Education in that department, also took a knee. 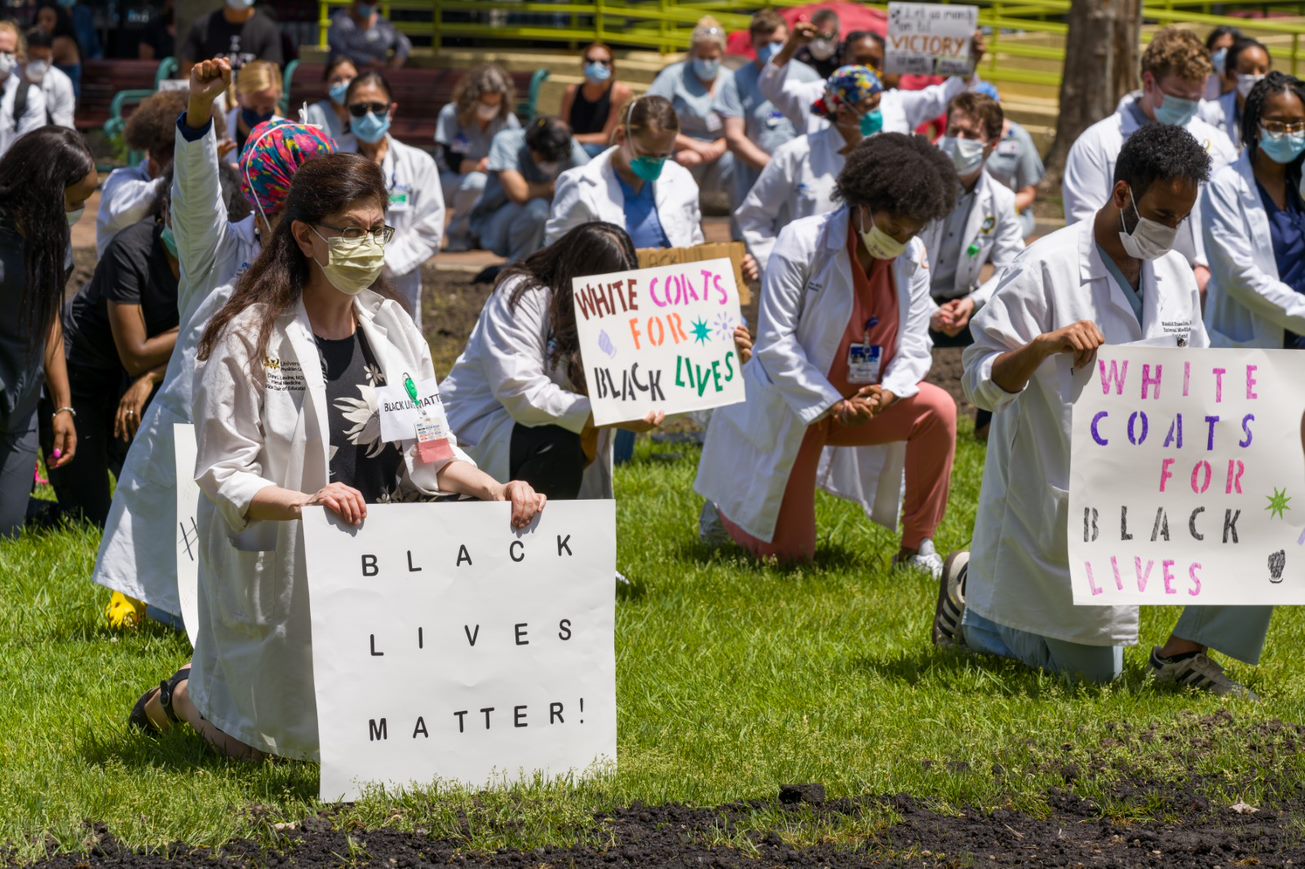 “As a white person I have enjoyed privilege.  But as an Ashkenazi Jewish woman, much of my family died in the Holocaust,” she said. “I learned from a young age that there was social injustice in the world.  This week it was obvious the degree to which black people continue to suffer.

“This week our students graduated from ready to practice the healing arts,” she added. “It should have been be a joyous time. But our joy was marred by a pandemic of racism. Because when someone says ‘I can’t breathe,’ he is saying I am dying because of social and structural racism. We are physicians. We cannot let people die. We must change this system. I kneeled with my community to show that I support my black sisters and brothers, and I will work together with my community to root out social injustice and structural racism in every way that I can.”

Eric Ayers, M.D., associate professor of Internal Medicine and section chief of Internal Medicine-Pediatrics, pointed to the four most cited outcomes in “Authentic Leadership:” increase in trust, respect, loyalty; inspiring, motivating, evoked passion and hard work; generating a positive environment for work and one that is inclusive; and generating team unity and fostering collaboration as his reasons for participating in the event.